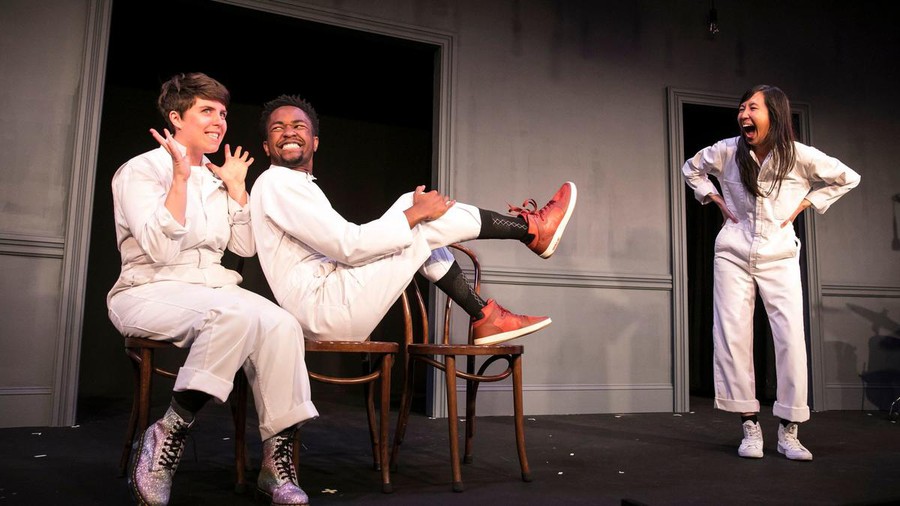 Nobody goes into comedy because they're well-adjusted. The Second City has been struggling with that for the past year or so—the privately held company laid off four full-time staffers and was on the business end of a racial discrimination lawsuit filed by a former (white) cast member earlier this year. But none of that is apparent in the theater's 106th main stage revue, Dream Freaks Fall From Space.

Every Second City Show is generally a worthwhile experience for out-of-town visitors, but this show is so special that even Chicago natives should indulge. Written and performed by second-time Mainstage cast member Kelsey Kinney, and featuring new cast members Ryan Asher, Tyler Davis, Jeffrey Murdoch, Tien Tran and Nate Varrone, Dream Freaks is an absolute tour de force in improvisational comedy. Its pacing is tight, with long sketches followed by bite-size one-liners, political takes followed by apolitical runs, and every cast member displays high levels of empathy and comedic intuition.

As the playbill states, Second City show structure is usually relatively consistent: beginning with two mostly scripted acts, followed by a third improvised act. The cast and crew constantly test and adjust material that can then be refined for a sketch the next day. So if you've seen a revue before (the 105th was The Winner...Of Our Discontent), some bits might be tweaked, but the process of positive refinement is worth coming back to see. Even in the old pieces—one in particular where each member of the cast says the phrase "I once had a friend who watered a plant for three weeks before finding out it was plastic!" comes to mind—there are new twists and turns, born from earlier feedback that has been incorporated.

This process of refinement is most evident when the content has politics in its crosshairs. The Second City has never shied away from political material, and comedic theater as a whole has used the White House's abdication of moral leadership to its advantage. But compared to their previous shows, Dream Freaks is the sociology major’s diatribe. This show’s politics see President Donald Trump as a symptom of a larger structural problem. In effect, Davis croons "I gotta know, did you vote for Trump?" to a potential lover, and the cast does do a ballet wearing Trump masks as "Send in the Clowns" plays in the background, but the next line of Davis’s song is now "Red and blue don't mean nothing to me, but how could you vote for that clown?" quickly followed by Varrone’s Putin impression, which compares complaining about Trump to “Febreze in a nasty poopy bathroom.”

This plays better, not just because the cast is punching up, or because it's kinder to an audience ordained by geography to be more conservative than New York or L.A., but because the jokes feel like an extension of a truly diverse cast's experiences. The biggest and best kept secret of improv is that you don't need to be funny to be a good improviser, you just need to be able to create earnest characters about which audience cares. The female cast members singing their "Lady Song" ("We made so much money selling pussyhats, we retired./ Gender is a construct but this is our lady song."), Davis going on a rant about police brutality, and Tran singing about how it's weird that we ascribe heterosexuality to babies, all of which are compelling moments not because the premise is completely fresh (political comedy moves far too fast for that in the Twitter-era) but because there are women in the cast, Tran is gay, and Davis is black. They are each embracing these parts of themselves and inviting the audience to do the same. The political becomes the personal, and the personal is compelling.

Compelling, of course, depends on the audience when the show is improvised. It's easy to be compelling to a group of people like you, but the real magic of improv happens when you have to win over a boozy hostile audience that'll enthusiastically shout "Harvey Weinstein!" when you ask for a celebrity name. Kinney, took that suggestion in stride during her Mother Goose nursery rhyme parody sketch. "More reflection on your character than mine," she said in her character voice, before incorporating the suggestion into a rhyme. The two other improv sketches—based on The Butterfly Effect and Six Degrees of Separation—are similarly unruffled masterclasses on building realistic and funny scenes on the fly. The group’s cohesion in this respect is actually surprising, given that not everyone in this cast has a formal improv background (Tran performed stand-up, and Varrone was a humor writer).

And while there are a few moments (a sketch with two kids duped into thinking prom was in a sewer) that lacked driving motion, both the sketch and improv parts of this show were incredibly well-adjusted. These are truly the poorly-adjusted oddballs on whose personality Second City thrives. Nothing is more emblematic of their collective strength than the final sketch, called “Suit in a Backpack,” in which Murdoch—wearing boxers and a backpack—comes on stage singing "Suit in a backpack, suit in a backpack," only to have all the other cast members join him. Tran plays the cymbals, Varrone the drums, Kinney the accordion. and Asher the harmonica, and all the instruments join together in beautiful cacophony as Murdoch puts on his suit, just as God intended.