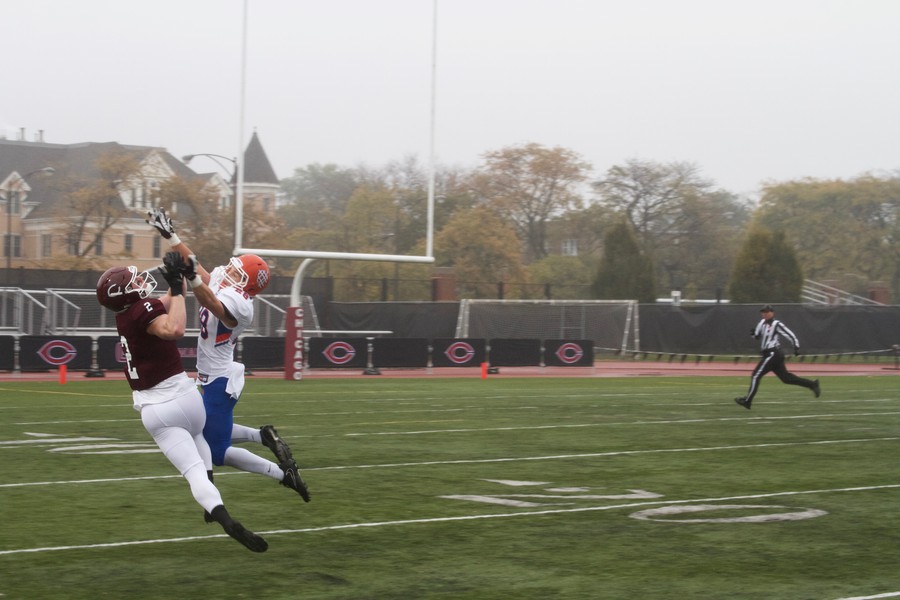 On Saturday afternoon, the University of Chicago football team played their final home game of the season against Macalester College. The Maroons came out on top with a 19–14 win on their senior day. With a record of 5–4 overall and 3–2 in the Midwest Conference, UChicago is now the No. 2 seed in the North Division. At senior day before the football game, the 18 seniors, families by their sides, were recognized by the coaches and the rest of the team. Back in 2014, the seniors were on the team that won the UAA title, and over the past four years, their class has a cumulative record of 23–15.

UChicago only passed the ball a total of 10 times throughout the Macalester game, but ran the ball 56 times for a total of 253 yards, 249 of which were rushed by fourth-year running back Chandler Carroll. For the third year in a row, Carroll had a 1,000-yard season, and rushed the second most yards of his career at the game this weekend. Macalester ended the game with 262 passing yards, but the Maroons’ defense killed every attempt at rushing, leaving the visitors with a total of negative 42 passing yards in the end. This was partly due to the four fumbles and two lost balls on Macalester’s side.

In the first half of the game, third-year kicker Mike Kurzydlowski scored three times from 21, 27 and 23 yards out. Also in the first half, second-year Ben Christensen grabbed a fumble and intercepted a pass. At halftime, the Maroons were ahead 9–0. At the beginning of the second half, Kurzydlowski came back for another field goal, this time from 38 yards. Soon after, Carroll rushed 25 yards down the sideline for a touchdown, raising the score to 19–0 for the home team.

Defensively, second-year Bill Rotnicki intercepted the ball at the end of the third quarter, and fourth-year Jeremy Vincent grabbed another at UChicago’s one-yard line during the fourth quarter. Second-year Zach Atiyeh had the most tackles, with nine total, followed by first-year Ryan Montgomery with eight and first-year Dylan Faires with seven. Fourth-year Peter Casey also held off the offense with three tackles for loss.

In the fourth quarter, Macalester scored two touchdowns, increasing their score to 19–14 for the Maroons. With three minutes left in the game, they began their final drive, but dropped a pass on fourth down to give up their last opportunity to make a comeback.

“It was a physical game but we were able to do just enough on offense to come out on top,” said fourth-year wide receiver Jamie Rieger. “I’m grateful to all the underclassmen for helping us to go out with a win on senior day, and I’m extremely proud of my fellow seniors for sticking with it for all four years. It’s been a great ride and I’m going to miss strapping it up on fall Saturdays, but I’m looking forward to one last opportunity to play with my boys and hopefully we can come out with a win and build momentum going into next season.”

The Maroons play at Lake Forest this Saturday, November 11 at noon. The winner will take third place in the Midwest Conference.