"Call Me By Your Name" Is A Satisfying, Sumptuous Reverie 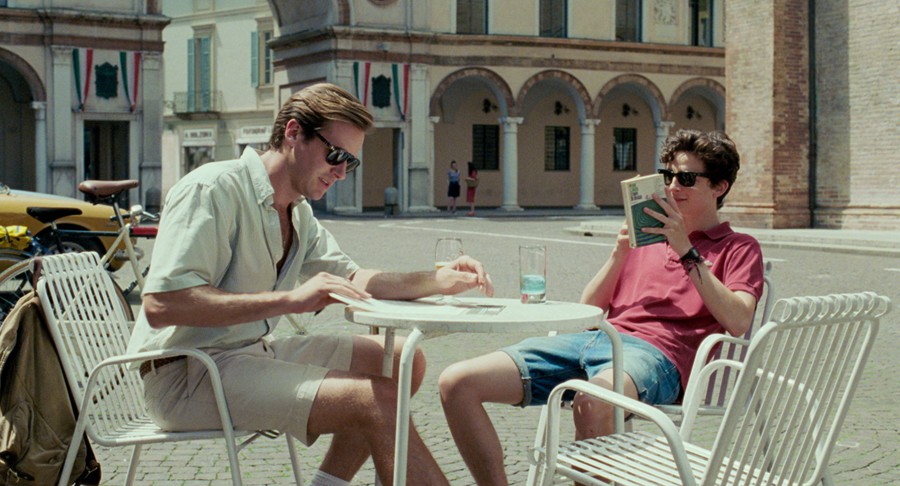 Oliver (Armie Hammer) and Elio (Timothée Chalamet) are the unlikely lovers at the center of Luca Guadagnino's latest drama.

To emerge from the theater after watching Call Me by Your Name is to experience the hazy lassitude of waking up from a dream. I Am Love director Luca Guadagnino’s latest venture is practically impressionistic in its evocation of first love and inevitable heartbreak—a parade of feelings, memories, and sensations couched in a nostalgic glow, as though recounted years later.

The setting is “somewhere in Northern Italy” (the film was shot in Guadagnino’s resident Crema), and the year is 1983. For fun, Elio transcribes the piano repertoire on his Walkman by day and goes out dancing to the Psychedelic Furs at night. He is immersed in a fumbling romance with Marzia (Esther Garrel), a girl his age, and initially regards Oliver with indifference bordering on annoyance. To Elio’s chagrin, Oliver can’t quite be pinned down: charismatic yet aloof, flippant yet articulate, sensual yet shrewd. However, Elio begins to desire Oliver, then pursues him recklessly. His advances are both bullishly confident and cripplingly self-conscious, as only a teenage boy’s can be. Oliver, to Elio’s delight, eventually—albeit cautiously—reciprocates.

Call Me by Your Name is reminiscent of A Single Man (2009) in its hypnotic visual sumptuousness, but where that film reveled in close-ups and details, Call Me by Your Name steps back. The shot is remarkably wide in intimate scenes, like Elio and Oliver’s introduction and Elio’s oblique declaration of love. The effect is not one of alienation, but deeper immersion: We watch passively as the relationship progresses, like an unhurried stream.

Intriguingly, the words “gay,” “homosexual,” or any variant thereof only appear once in the film, and are used to refer not to the central lovers but to a visiting middle-aged couple (played, in a fun twist, by Aciman himself and producer Peter Spears). Indeed, affixing labels to Elio or Oliver would feel false. When Elio begins falling for Oliver, his relationship with Marzia becomes convoluted, to be sure, but is never cheapened or discredited. As for Oliver, besides a passing comment that his parents would “cart [him] off to a correctional facility" if they found out about him and Elio, his sexual psyche is never fleshed out. In this respect and others, Oliver remains a beautiful mystery.

However, like the reverie it is, to unflinchingly embrace Call Me by Your Name requires a certain suspension of disbelief. At two hours and 12 minutes, the film is not a moment too long: Building up Elio and Oliver’s relationship requires at least that because it constantly swims upstream to convince us of their chemistry. We know what draws Elio to Oliver, but the countercurrent of that attraction is frustratingly hard to grasp. Later on, when Oliver reveals that he was attracted to Elio almost right off the bat, we are presumably supposed to be as surprised and touched as Elio is. Instead, we’re just surprised.

Somehow, others in town are more perceptive. The film’s supporting characters are functionally peripheral but teeming with untapped multitudes, especially as they relate to the young men’s tryst. Elio’s mother arguably picks up on her son’s infatuation with Oliver sooner than anyone. Marzia, who could easily be pigeonholed as the discarded lover, approaches Elio to extend an olive branch at film’s end, and in doing so becomes the bigger person. Even Aciman and Spears’s cameo as a visiting gay couple carries the bittersweet implication of what could have been for Elio and Oliver. Dr. Perlman’s touching sermon-cum-confessional is a major emotional touchstone of the film, but one wishes it hadn’t taken up so much oxygen, dominating what is already a rich tapestry of supporting contributions.

Ultimately, Call Me By Your Name fudges its central romance somewhat because we never know nearly enough about Oliver—who, to our eyes and Elio’s, gives little to no indication that he’s interested for the first half of the film. Hammer isn’t to blame; Call Me by Your Name boasts remarkable acting across the board, and Hammer is no exception. The disconnect is deeper than Oliver just playing hard to get: When Elio and Oliver do finally collide, the unintended result is that the erotic payoff is greater than the emotional one. The problem is that the film aims to land both.

Even so, watching Elio and Oliver weave their way through the Italian countryside, we can be content drinking in the scenery without peering too closely. Like first love, Call Me by Your Name is equal parts portrait and projection. The outlines blur, but the impression remains.