The Underground Collective Delivers Words to Keep in Mind 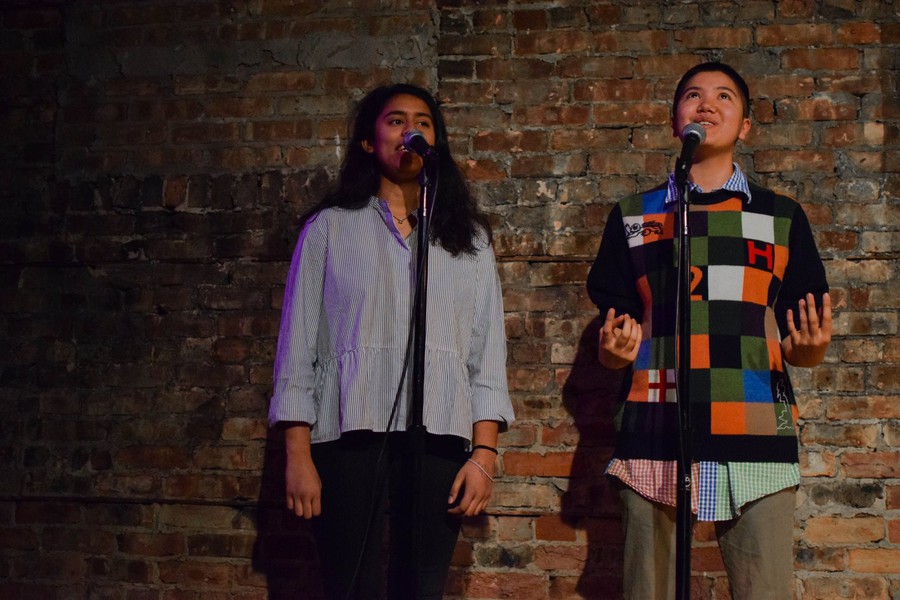 The Underground Collective’s showcase on Thursday night, titled “Keepsake,” started with a set of unusual rules. When Felix Lecocq and Jeremy Lindenfeld, the MCs for the night, took the stage at the Revival, they immediately explained the etiquette of slam poetry, which involves being as vocal as possible. At first, the idea of enforcing enthusiasm seemed odd. Yet the audience’s loud support was anything but contrived. They cheered (and snapped) their approval as the eight members took turns speaking, dancing, singing, and occasionally doing all at once.

Lecocq opened Act I with a poem entitled “An Announcement,” which began with a content warning for depression. With such a disclaimer, it was almost difficult to know how to process his rapid escalation toward nearly euphoric optimism. Yet by using the rhythm of the simple phrase “by which I mean,” he managed to get there seamlessly, shifting from one bold statement to the next. The poem was, in many ways, the most vibrant piece of the night, flowing through unexpected and beautiful metaphors before any single one had time to settle in.

The speedy delivery of “An Announcement” and many of the other pieces could be hard to follow at times. Here, however, was where slam poetry etiquette became useful to not only the performer, but also the audience. With little time to process the poetry, a single line which may otherwise have been lost was saved from oversight by the cheer of a touched audience member.

Trish Zulueta, who produces her own music, hopped on stage next with her signature pep, along with Lindenfeld, for a performance of the duet “Letters.” The opening electronic beat was surprisingly slow and atmospheric. The best part of the song by far was the chorus, in which the duo sang together, multiplying each other's energy. Like a talent show amongst close friends, the performance stumbled occasionally, but even the most awkward moments were uncomfortable in a fun way.

After a foray into contemporary dance performed by Claire Moore, Lecocq opened Act II with a stand-up routine about the “nitty gritty” of being transgender, a shameless and hilarious exploration of “what transitioning really looks like.” Not only did he make stinging criticisms of the world’s image of transitioning, but he also managed to weave in plenty of self-criticism, often preemptively critiquing or parodying his own act.

This kind of self-conscious disclaimer, or reflection, appeared throughout many of the night’s acts; Bryan Waterhouse, in his poem “Twisted,” worried out loud about how derivative his poetry was. Amid such a supportive and honest environment, these moments of anticipatory modesty revealed the remnants of some inhibition in each performer, even as they fearlessly tackled personal subjects.

One of the most well-planned parts of the show was a multi-media piece titled “Cornerstone,” performed by Lecocq and Ashvini Kartik-Narayan, with Lindenfeld providing guitar and lyrics and Moore dancing. A sort of montage of expression, the piece was at times close to being overwhelming. However, as Lecocq and Kartik-Narayan rapidly traded lines about finding themselves a new name and a new hairstyle, respectively, there was a surprising coherence to the whole performance. Their lines, rather than remaining two independent threads, grew together with elegant logic, revealing the shared anxiety of shopping for something self-defining.

Kartik-Narayan’s solo piece, “Pixelated,” was one of the most introspective and honest performances of the night. Unlike many of the other performances, she didn’t get swept up in the grand or the political, but rather focused herself on a single anecdote and, through it, explored themes of memory and the mundane. There was no glorification of life’s “cacophony.” Rather, grounded in her intriguing train of thought, she critiqued the overload of “faces” and events that had been quietly accumulating with each performer’s addition of keepsakes.

The purported theme of “Keepsake” frequently felt more like a forgotten afterthought than a true organizing principle—as Lecocq joked at the end of his stand-up, the routine fit into the theme because “dicks can be keepsakes too.” Yet, by the end of the night, the audience couldn’t have cared less about a coherent “theme”—the show was memorable enough to become a keepsake, itself.