Claude VonStroke returned to his roots at Double Door on Saturday, debuting his self-titled, ten-track LP.

"I've been [in Chicago] a lot, but never like this," Barclay Crenshaw said, playing a sold-out show at Double Door last Saturday.

He was referring to his more commonly known alias, Claude VonStroke, a prominent name in the house scene for nearly 15 years. The owner of his own label, Dirtybird Records, Crenshaw sought to rediscover his hip-hop roots with his debut album Barclay Crenshaw, a big shift from the deep house and techno sound on which he built his career.

Crenshaw described the 10-track debut LP as his "cosmic manifesto," an "[exploration of] alternate galaxies and realities while also paying homage to classic '90s hip-hop—and experimenting with some new sounds too [sic]." Boasting vocals from The Cool Kids, Mr. Carmack, The Underachievers, and Lady Chann, the album features elements of acid-trip bass and broken beats. 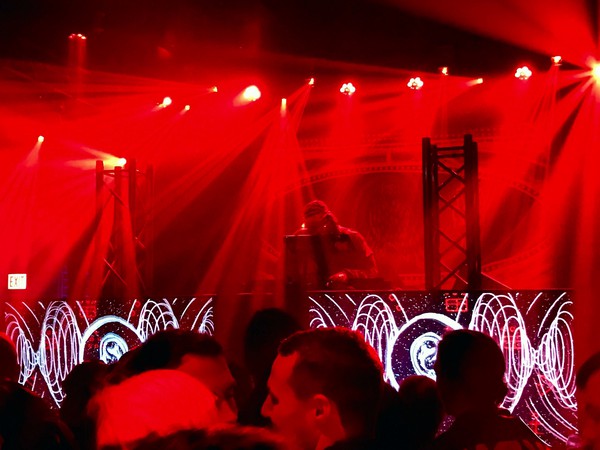 Barclay Crenshaw returned to his hip-hop roots at Double Door.

Through Crenshaw's social media accounts, it was clear that he had a unified vision for his new hip-hop identity. He wore his now-signature uniform—yellow-tinted sunglasses, a neck-flap hat emblazoned with his name in a hieroglyphic font, and a matching beige boilersuit that resembles a Park Ranger uniform—throughout the show. It was a stark contrast to his casual and goofy house identity.

Crenshaw opened the show with "Fatal Error," a track featuring a whimsical drum melody punctuated with rumbling bass notes. The crowd instantly fell into a head-nodding trance as symbols danced across the screen to a red and blue light show. It may be Crenshaw’s “debut tour,” but many attendees were already wearing Dirtybird merchandise, showing the depth and loyalty of Crenshaw's fan base.

"Fatal Error" descended into a slew of bubbly sonar sounds and 30 seconds or so of a deafeningly loud, oscillating bass note; I thought my hearing had gone but noticed that everything seemed to congeal into slow motion as pure bass flooded the quaking venue.

Despite claiming on Twitter that there would be no trace of house music in his Barclay Crenshaw venture, Crenshaw varied the tempo on his set, at times projecting clear house vibes. Halfway through, he switched from the typical 90 BPM hip-hop to 130 BPM before dropping back down again for "The Gene Sequence." The slower pace accentuated vibrating sequences of off-tune notes resembling computer noises and booms of resonant bass notes.

Though I'm no hip-hop connoisseur, it was hard not to get sucked into Crenshaw's infectious rhythms and masterful mixing of electronic and '90s hip-hop genres. One could even say I was abducted.