A Taste of Black History Month at Sola Cafe

The Lutheran School of Theology is serving up a poignant exhibition by graphic artist Akeem Haywood and photojournalist-turned-J.D. Robert Pitts.

Engelwood-born graphic artist Akeem Haywood walked out from behind the lunch counter to tell me about his sculpture: a six-foot-tall cardboard human figure chained to a desk—a counter not unlike his own. Haywood brushed the flour off his hands and took a seat.

The Lutheran School of Theology’s Sola Café is serving up an unpalatable new main course. In honor of Martin Luther King Jr. Day, and now extended into Black History Month, the café is featuring works by Haywood and photojournalist-turned-J.D. Robert Pitts. A mix of paint, chalk, cardboard, and slurs, the exhibition seeks to unsettle.

“The question is: What should make you more uncomfortable—WORDS? Or the violence and brutality of: Black, Brown, Red, Poor, Indigenous Muslim, Migrant, Trans, LGBTQ, Pagan, Undocumented Bodies?” the exhibition label reads. 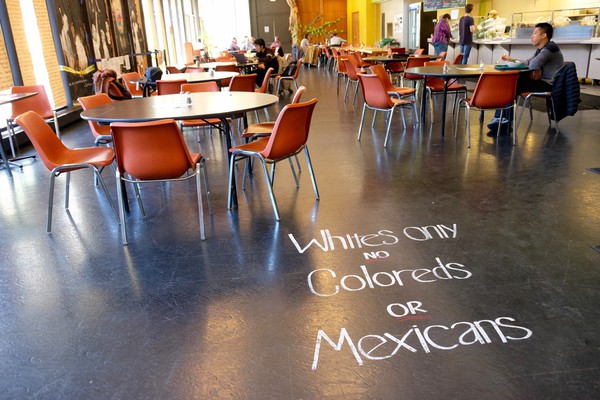 Sola Café is charming. It’s warm, ambrosial, and vaguely autumnal, offering a cornucopia of comfort foods. Inasmuch as a cafe can, it exudes empathy.

Through their work, Haywood and Pitts weaponize that safety. When you enter, disgust immediately hits you below the belt, from the floor: Whites only no Coloreds or Mexicans. Haywood’s chalk marker lettering is precise, each letter a foot tall.

“When I did some research, this was one of the first signs I saw. And it was a really nice sign—like someone spent a lot of time making this symbol for hate,” Haywood said. 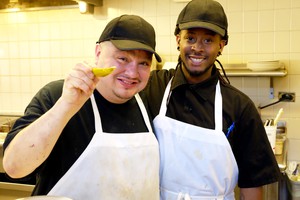 Artist Akeem Haywood poses with his co-worker at Sola Cafe.

While Haywood seeks to disarm café patrons with this work, he also asks them to participate in the art: Step on the words. They’re just chalk, and with each passing heel, they wear away a little more.

Haywood’s chalk art also takes to the walls. Above his cardboard sculpture, Haywood illustrated two more images. On the left, next to the cafeteria trays, he portrays a protester bearing the A-frame sign “CAN’T Eat DON’T Buy.” On the right, a silhouette of Martin Luther King Jr. looks out from behind bars, branded with the words “FREEDOM isn’t free.”

On the opposite wall—a plane of flat glass—Pitts’s four-part painting meditates on the theme of progress. A photographer himself, Pitts translates iconic images into new media. At Sola, Pitts uses house paint on brown sheet paper to depict an infamous black-and-white film. A Texas lynching mob (fresh from church, according to Pitts), taunts a terrified figure spread-eagled above them. To the right hangs a multi-colored portrait of the victim’s mother, adorned with the words “peace,” “love,” and “transformation.” 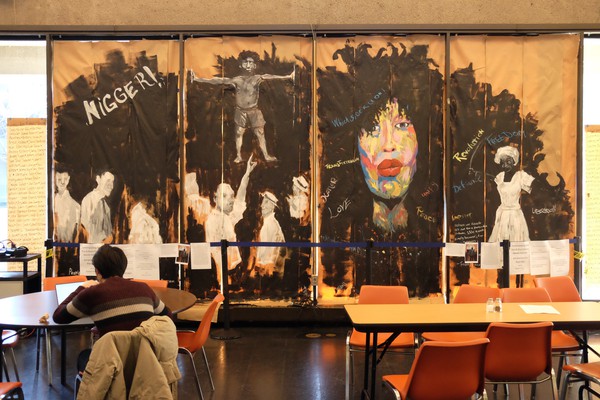 Robert Pitt's painting in Sola Cafe, based on an infamous black-and-white film shot.

"Hopefully, as they [the viewer] get closer, as they move along the piece, they see a transformation—from one ugly part of history, of life, to what it can and should be,” Pitts said.

The tetraptych proceeds into a final panel of revolt. The last image, based on photographs of Haitian voodoo culture, depicts a woman brandishing a machete. To her left, a Frantz Fanon quote reads, “When we revolt it’s not for a particular culture. We revolt simply because, for many reasons, we can no longer breathe.”

"Marginalized people protest and speak out because there's no alternative. We have to,” Pitts said. 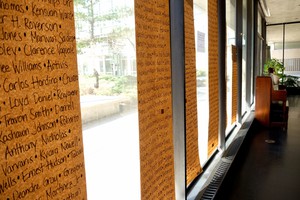 Lutheran School students Maija Mikkelsen and Elliott M. Drake compiled a list of 762 names of those who lost their lives to violence in Chicago in 2016.

The third component of the exhibition consists of 762 names lining the café windows on long scrolls of paper. Lutheran School students Maija Mikkelsen and Elliott M. Drake wrote out the name of each individual killed in Chicago in 2016.

“There are a few people on that list—three actually—that I knew. So it definitely hits home. One of the cooks here—his cousin’s on there too,” Haywood said.

And still, soft acoustic music plays over the speakers. Dishes clank. There’s a pleasant chatter. It’s almost as if—if you really wanted to—you could tune out the slurs and contorted bodies. Business as usual.

“I was leaving one day, and the mailman was leaving too. He said, ‘Hey, what the hell’s going on here? What’s with those words?’ I said that it’s art for MLK Day, but he was just trying to get out of here. There was a woman last week too. She was angry,” Haywood said.

“She said she didn’t even consider it art.”

The Lutheran School of Theology’s Martin Luther King Jr. Day celebration and Black History Month exhibition is sponsored by Dr. Cheryl Pero, director of the Lutheran School’s Pero Multicultural Center. Jennifer Powell, chef and refectory manager, and Scott Chalmers, Dean of Student Services, assisted in coordinating the programming. The exhibition will be relocated to a currently undetermined location next week. 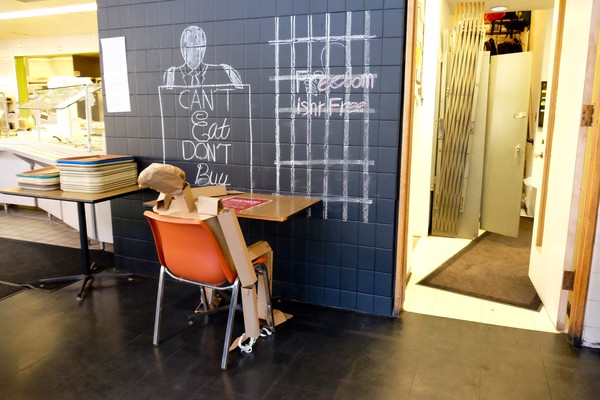 Akeem Haywood's cardboard sculpture of a person--chained by both their will to remain at the lunch counter, and the criminal justice system. 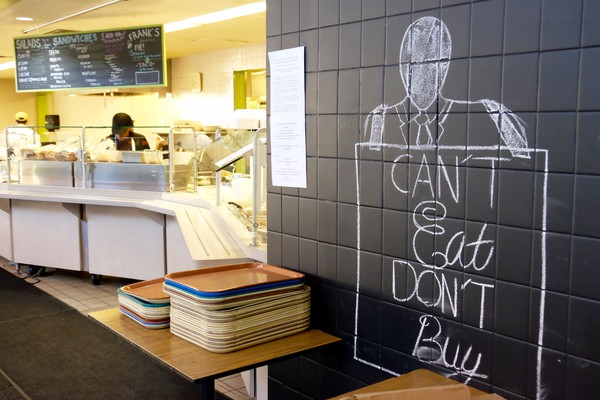 Akeem Haywood's chalk drawings don the walls as the artist works behind the counter. 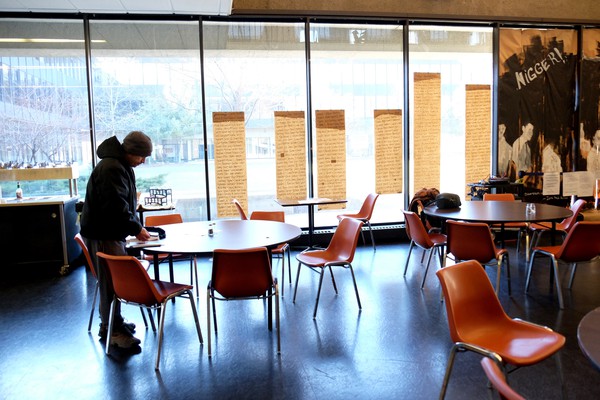 The names of those lost to violence line the windows of Sola Cafe. 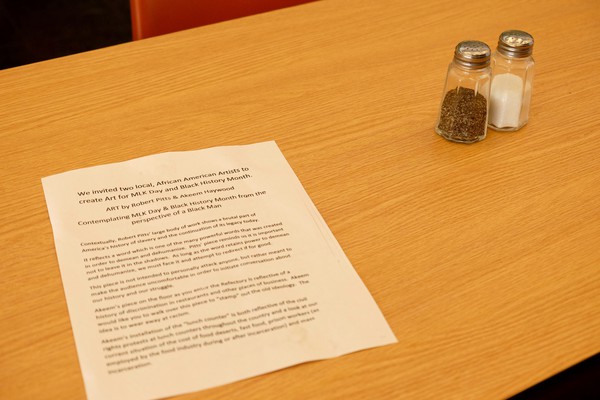 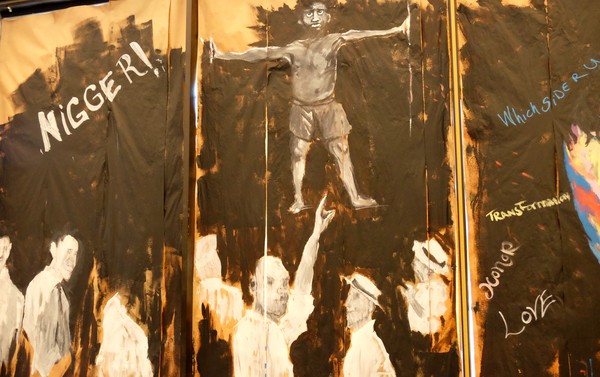 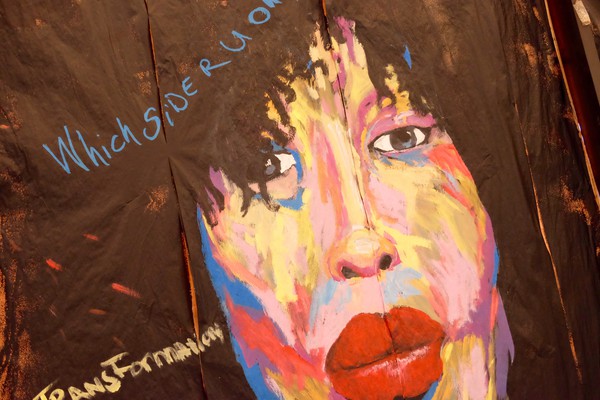 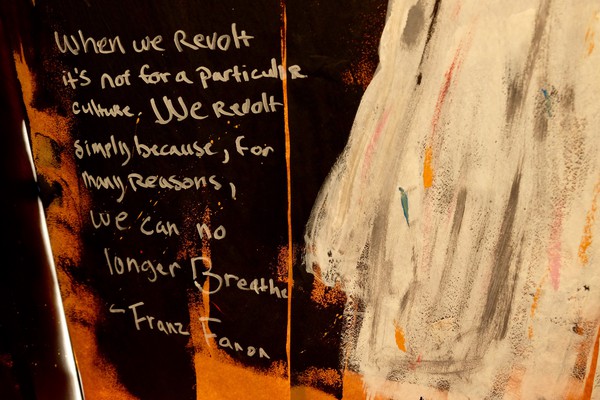 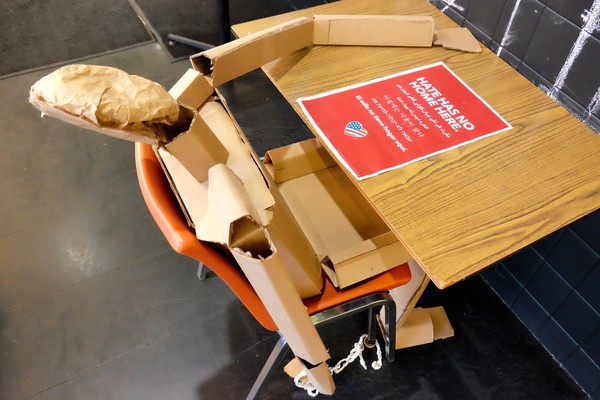