Who Runs the World? Still Straight White Men, With One Condition

Steppenwolf's new play, despite its title, proved to be much more nuanced than a mere takedown of privilege. 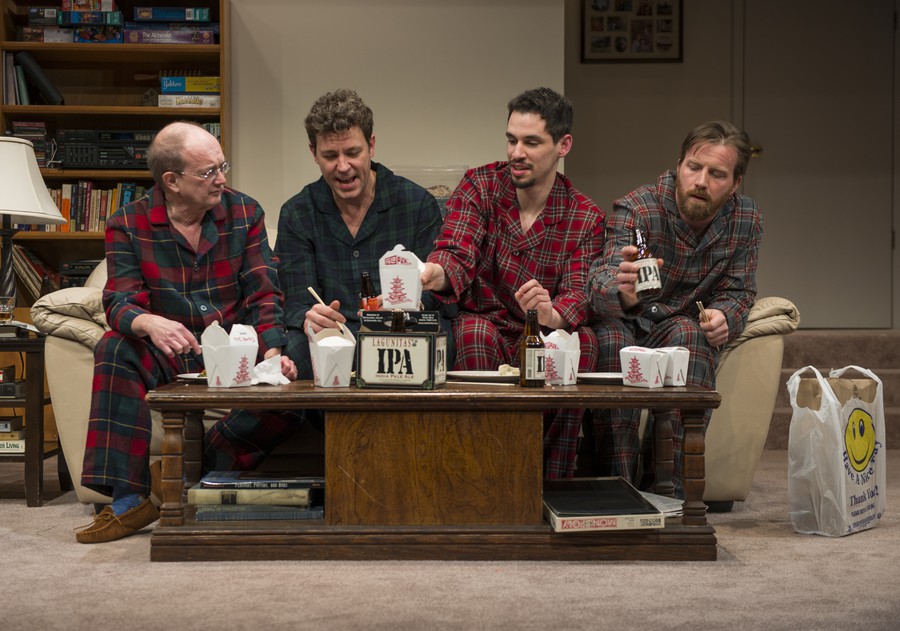 Playwright and director Young Jean Lee’s Straight White Men grabs you by the collar even before the curtain rises. As the audience files into the performance space—in this case, Steppenwolf’s Upstairs Theatre—they are met by blasting, thumping hip-hop, with lyrics vulgar enough to make Donald Trump blush blood-orange (e.g. Lady’s seminal “Pussy Be Yankin’”).

“Do you want earplugs?” an androgynous-looking usher yelled to a middle-aged woman in my aisle. More than a few patrons in the 50-plus demographic took them up on their offer.

As the clock struck 7:30, the music faded suddenly, and said “usher” took the stage, alongside a similarly coiffed companion, donning a jacket with “2 CUTE 2 BE CIS” emblazoned on the back. They introduced themselves (Elliott Jenetopulos and Will Wilhelm) and stated their pronouns as they/them/theirs.

“Some of you might have walked in feeling completely comfortable while others felt uncomfortable,” Wilhelm said with a small, sad smile. “Kind of tough, isn’t it, being in a situation where you’re forced to feel uncomfortable?”

Jenetopulos and Wilhelm’s introduction set the tone for the show to follow: hyper-aware, multilayered, and incisive—just what you’d expect from a play called Straight White Men. But despite the duo’s near-apology that the story ahead only featured straight white men, Lee’s narrative proved to be much more nuanced than a mere takedown of privilege.

Straight White Men is living-room theater in the most literal sense, taking place entirely in a family living room. As implied, the cast of characters is entirely straight white men from an ostensibly “normal” middle-class family, home for Christmas: Ed (Alan Wilder), the endearing patriarch; Drew (Ryan Hallahan), an accomplished author and professor; Jake (Madison Dirks), a banker who is at once socially conscious and emotionally stunted; and Matt (Brian Slaten), the selfless eldest brother and former child prodigy.

But, as we soon learn, this is no normal family. Lee, who is Korean American, flouts whatever assumptions we might make about a play called Straight White Men by making its straight white men, well, woke. Our white, cis, heterosexual quartet know their place in the world and regularly remind each other of it. In one of the more humorous, if absurd, scenes in the play, Drew and Jake dust off a game of Monopoly, except that it has been renamed “PRIVILEGE” and modified accordingly—apparently the invention of their late mother. (A sample card: “Pay $50 to nearest LGBTQ community center.”) As a young man, Matt apparently protested his high school’s all-white adaptation of Oklahoma!, and the recollection cues a song-and-dance routine from the rambunctious brothers—one of many in Lee’s physical, exuberant script.

But the holiday idyll is suddenly shattered on Christmas Eve, when Matt breaks down in tears over Chinese takeout. The other three men are rattled, and before long, concern gives way to wild-eyed speculation. They know that recently, for reasons unknown to them, Matt—a Harvard alum with multiple advanced degrees—has moved back home and taken jobs for which he’s overqualified. He’s depressed, Drew insists. No, Jake argues, he’s evening the playing field by sidestepping his privilege and valiantly challenging the socioeconomic world order. Meanwhile, Ed figures he’s stressed about his student loans.

Lee implies that none of these hypotheses are quite true, but the further the play progresses, the more Matt’s family needs them to be true. Ed, Drew, and Jake can accept anything but the idea that Matt is who he is simply because he wants to be. Their suspicions culminate in a series of dehumanizing interrogations; ultimately, Matt is completely abandoned by his own family. Lee’s curveball conclusion is that even the privileged are policed by capitalist frameworks; to be unproductive is to be practically subhuman.

Sound like a lot? It is. Though Straight White Men’s central thrust is compelling, its sudden pivot from identity politics to capitalist critique is jarring, to say the least. After hitting cruising speed, the play’s end feels a little something like whiplash—which it’s fair to assume Lee intended, but perhaps not to the finale’s level of implausibility.

For the most part, however, Straight White Men shines. Lee has a knack for situational comedy, evident from the hilarious first scene, in which Drew goes to absurd lengths to distract a video game-playing Jake. Each character is keenly drawn to life, bringing their own distinct personalities to the table without deferring to archetypes. The occasional collision of clunky dialogue and stiff acting sometimes took one out of the play, but fortunately, these moments were few and far between. The standout, appropriately, is Brian Slaten as Matt: he portrays Matt’s wells of kindness and melancholy in such a way that one attribute seems incomplete without the other.

That’s probably Straight White Men’s biggest surprise: ultimately, Lee’s portrayal of all of these men is a sympathetic one. As noted in the program, Lee was driven by one question while writing the play: “If I woke up tomorrow and I was a straight white man, what would I do?” Which in turn morphs into the question: What would it take for a straight white man to be marginalized by society? Whether her response is compelling, however, is up for debate.

Straight White Men plays at Steppenwolf Theatre (1650 N. Halsted Street) through March 19. Go to Steppenwolf.com or call the box office at 312-335-1650 for details and ticket pricing.

An earlier version of this article referred to Elliott Jenetopulos by the incorrect pronoun at first mention. Their pronouns have been updated accordingly. The Maroon regrets the error.