I’m an economics major originally from Cape Town, South Africa. On campus, I’m involved with the Major Activities Board and the Admissions Office. 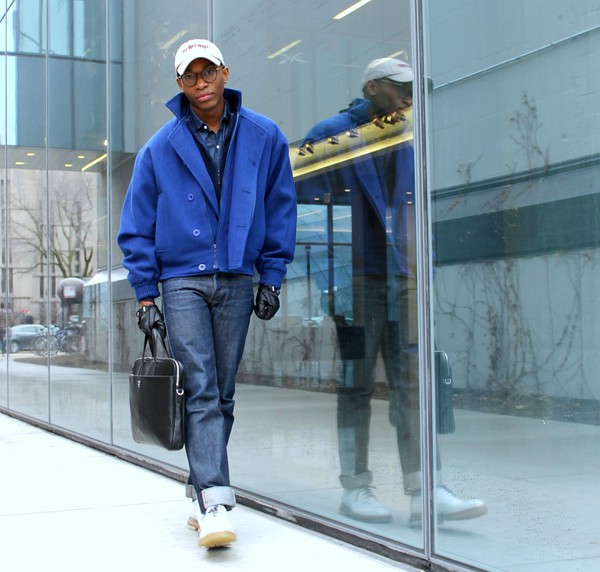 Pule is wearing a jacket by Yves Saint Laurent, a sweater by The Andover Shop, a shirt by Oliver Spencer, jeans by A.P.C., shoes by Lanvin, and a briefcase by MCM.

My style pays homage to the Ivy-trad movement, but at the same time there’s a very off-kilter side to it. I try to occupy these conflicting spaces and have fun with that tension. Ivy styling is well-considered and polished: the way the garments drape, the way the proportions are considered, the cheekiness of the motifs. One of my biggest style influences at the moment is Prince George (dapper little toddler). Brands like J. Press, The Andover Shop, and Brooks Brothers resonate with me. I’m drawn to a certain nostalgic machismo—I like to complement that with grunge undertones because the vast volume and the drama the aesthetic allows for is so unique.

"The most iconic style in some way incorporates irony." 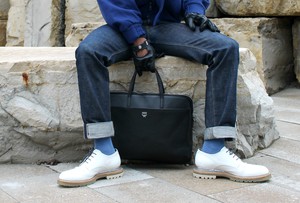 Ivy style refers to the style of dress that originated on Ivy League campuses in the ’50s and was the precursor to modern prep style.

I wouldn’t be able to put together an outfit entirely made of Brooks Brothers, or entirely out of grunge. I could be going to a community board of queer leaders on the South Side from a UCIB workshop. There’s no defined style guide for that because it doesn’t come around very often, so I have to draw inspiration from a lot of sources to fill in that gap. When it comes to my personal fashion, I want to see on myself what I see so little of in the world.

I’m a complete nerd when it comes to any of the clothes I wear. I research something for months before I can commit to buying it. And I don’t buy from chain stores or new—the last time I went into a brick and mortar shop was two years ago. I have a moral dilemma with fast fashion; I don’t find it necessary to be complicit in that. From a sustainability and resource productivity perspective, it makes so much more sense to thrift and to use secondary markets like eBay or Grailed. Often you’re able to get so much more for a lot less than what you’d pay at Zara or Gap. I have one rule I give myself: If I’m buying something, it can’t cost more than the equivalent at Gap. And I’ve managed to stay true to that rule for some time. I’m very strict about how I shop. I think you need to be because fashion can very quickly become a more expensive habit than it has to be.

The most iconic style in some way incorporates irony: It’s transgressive, it makes you hate elements together, but you’re incapable of pulling them apart. I think that’s why a lot of really taboo ideas and identities are first absorbed—or appropriated—into the commercial machinery of fashion. And subversion often trickles into the collective consciousness exclusively through fashion. On the other hand, there's this toxic culture industry the Frankfurt School predicted where so much of whom fashion excludes are the very people it draws inspiration from. There’s promise of that changing: More now than ever, you have the possibility of finding who you are and discovering your people through fashion.

"I think that fashion and the body are very political forces."

Another fashion icon of mine is Gosha Rubchinskiy. What he’s doing with streetwear, which I’m normally not a fan of, feels very current and very sleek. I also admire the very obvious political motifs he uses, like splashing the Soviet flag all over his garments. He said that seeing A$AP Rocky wear the Chinese and Russian flags at the Video Music Awards was one of the proudest moments of his life. Fashion repurposing propaganda is a cool concept.  There’s also [electronic music producer] SOPHIE, who has one of the most “out there” wardrobes. The way they dress up for shows is really cool: cinched waist, latex skirts, fishnet tops. I don’t think anything like it has been done in the past couple decades—and it definitely hasn’t reached the scale of their audiences. 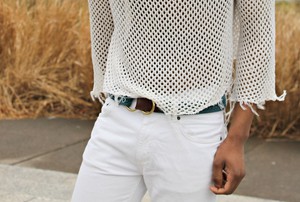 'I think that fashion and the body are very political forces. '

I think that fashion and the body are very political forces. When people look at me, I want them to see me as valid in a lot of spaces that I’ve been told I don’t belong in. As a minority, you often feel yourself policed, especially when it comes to how other people perceive you and how you convey yourself in response. Often you’re the only person in the room who looks like you—part of the strategy I’ve come to adopt is to use my wit, my intellect, and my wardrobe to make sure people can’t keep their eyes off me. I think my style draws from that strength—from a lot of transgressive and underground identities—to subvert bigger structures.  —PULE 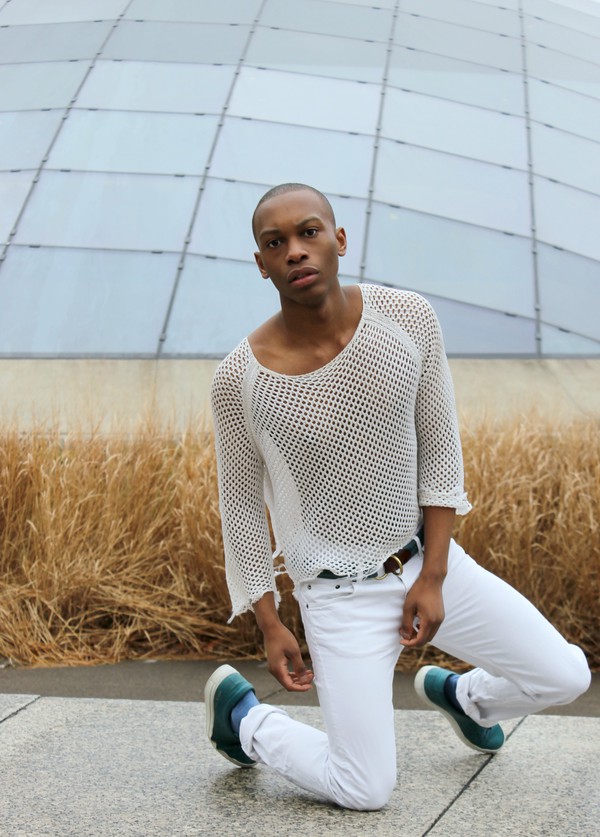 Pule is wearing a fishnet top by Yohji Yamamoto, jeans by Gant Rugger, shoes by Common Projects, and a belt by Brooks Brothers.

I’m majoring in public policy with a focus in urban education. I sit on a few boards at the Institute of Politics, I’m involved in the Organization of Black Students, and I work in the Student Activities Office. 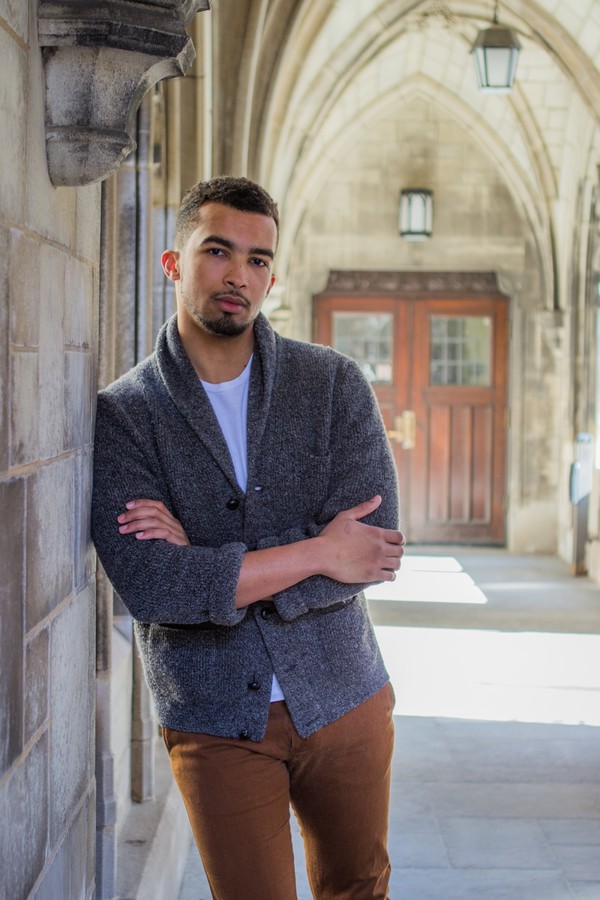 Chase is wearing a cardigan by J. Crew, a T-shirt by Calvin Klein, and pants by J. Crew.

I’ve never been into just one thing—I’ve always been into a million things under the sun. When I was 14, I was really into skateboarding and wore tight jeans and band T-shirts. Then I picked up a copy of GQ magazine when I was 15. “This is the Bible!” I thought, which is how I got into J. Crew—sweaters, dress shirts, ties, things like that. In college, I’ve struck a balance between the two: I want to be comfortable and wear the things that I like but also stick to the staples of dressing well. It’s been a process of figuring out what works but also sticking to your guns.

I think everyone has taken a bit of a journey to get to the style they have now, moving from “I’m 14 and this looks really cool,” to “Why did I ever wear that?” Even though my style has developed a lot, I try to incorporate things from when I was younger. I used to be really into streetwear—loved Pharrell Williams, loved skating, and that still informs my clothing choices now. I check out Supreme and Hypebeast online and see what they have. But stylistically, I’d say I’ve settled into “college comfortable”: An amalgamation of American prep and streetwear.

"I’m gonna keep the tie I wore when I met the First Lady until the day I die." 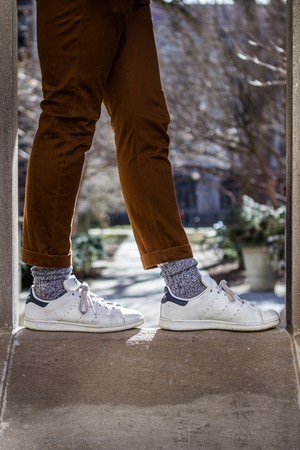 Chase is wearing socks by J. Crew and sneakers by Adidas.

I’ve gotten to a point where I’m a little less susceptible to peer pressure and what other people think of what I wear. Chances are, most of the things I own are classic and won’t fall out of style: Cardigans and T-shirts have been and will be around forever. Staple, workhorse pieces of men’s fashion. I’m a big believer in buying things that I’ll have for years—sometimes I’ll spend money I don’t have! I hope to hold on to the cardigan I’m wearing well into my late 20s or 30s. And I’m a big believer in online shopping—I know that a lot of people aren’t—but I’ve never personally had a problem with ordering things online.

Clothing makes me feel confident. I rarely feel better than when I’m wearing a suit, a new jacket, or pair of shoes—anything that makes me feel put together. And I love the fact that there are memories in clothes. First days of school and first dates, going to a new part of the country or the world. I still have the pair of Vans that I wore the first time I saw the Pacific Ocean and from my first concert. I’m gonna keep the tie I wore when I met the First Lady until the day I die. Being able to re-wear those pieces is like holding on to those moments and that’s a comforting feeling.

Moreover, I love the idea that clothing provides the opportunity to subvert the traditionally white spaces and whiteness at large. There’s a reclamation of power in wearing certain pieces. It’s Kanye’s pink polo. It’s Childish Gambino in the Band of Outsiders look-book. It’s Russell Westbrook wearing tattered jeans and Vans slip-ons before a playoff game. Basically, if there is a stylish black man in his 20s to 30s, I probably look up to him: Pharrell, Kanye, A$AP Rocky. —CHASE 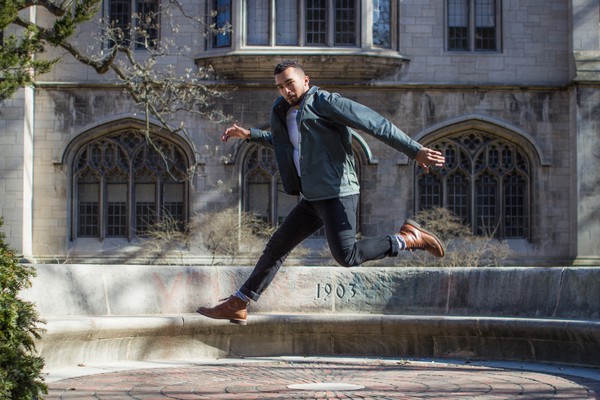 Chase is wearing a coat by Nanamica, jeans by J. Crew, and leather boots by J. Crew.