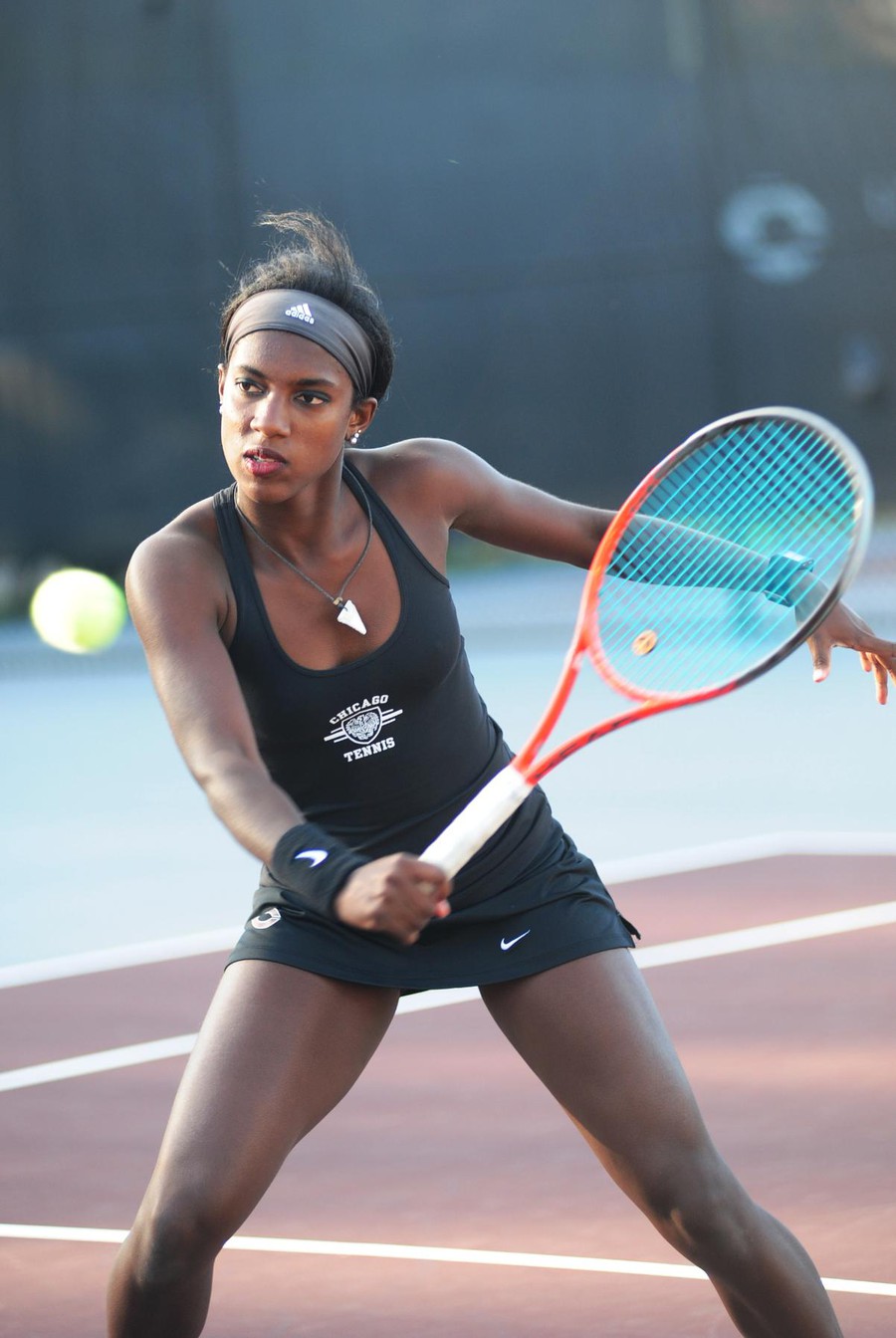 Second-year Kaela Bynoe intensely waits for the ball to come her way.

After a triumphant return to the court this past weekend, both the UChicago men’s and women’s tennis teams will look to continue their success in their matches this coming weekend. The No. 5 men’s team and the No. 10 women’s team will take on Hope here in Chicago before the men travel to Evergreen Park to participate in a matchup against Lewis.

Last weekend’s matches were extremely successful for the South Siders. The men’s squad competed against No. 35 Coe in two separate matches. The team came away with wins in each, touting 8–1 and 9–0 victories. In a similar fashion, the women’s team defeated Lewis with a decisive 9–0 win. These wins leave both teams with an undefeated season record thus far, with the men sporting a 3–0 overall record and the women a 2–0 record.

In regards to this weekend, the men’s squad is facing a particularly busy day, as they will compete against Hope before facing off against Lewis only a few hours later. The match against Hope should be a fairly easy victory; while the Maroons have earned a No. 10 ranking, Hope is currently not ranked within DIII. Lewis, a DII school, will probably prove to be the bigger challenge of the day.

The squad looks to continue its dominance in doubles play, as the men have yet to lose a doubles match this new year, and indeed have only lost one match the entire season, dating back to September.

Riding high off of their win against Lewis last weekend, the women’s team seems to be going into this weekend with some well-deserved confidence. “I feel pretty good coming into this match,” first-year Estefania Navarro said. “It’s early on in our season so the team is definitely still ironing things out but we’ve shown a lot of improvement since practice has started.”

Like the men’s team, the women’s squad should very easily be able to achieve a victory this weekend. The South Siders have not competed against No. 34 Hope in two years and have yet to face any common opponents during the current season. However, in their last matchup against Hope, the Maroons managed to achieve a very solid 8–1 victory. Additionally, the team’s respective rankings seem to point to a Maroon victory. With their No. 10 ranking, the South Siders sit a full 24 places ahead of Hope.

Despite its victory being more or less assured, the team is not backing down in its preparations for this coming weekend’s match. “The team is working on being aggressive both in singles and doubles,” Navarro said, commenting on the team’s focus going into the match. “Practice has been very intense but a lot of fun at the same time.”