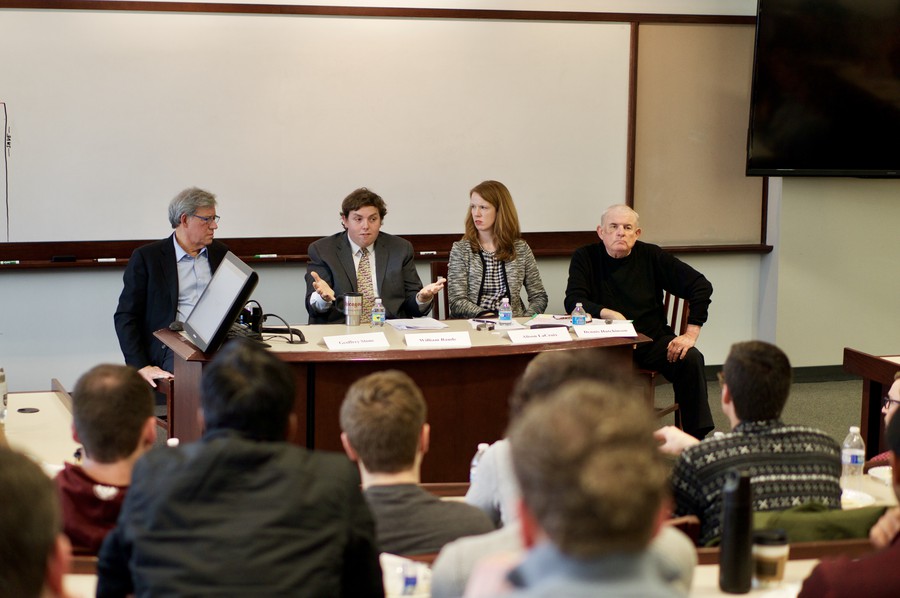 Law School professors Geoffrey Stone, William Baude, and Alison LaCroix sit down with fellow Professor Dennis Hutchinson to discuss the future of the Supreme Court and the nomination of Neil Gorsuch on February 20.

On Monday, February 20, professors Geoffrey Stone, Alison LaCroix, and William Baude from the Law School sat down with professor Dennis Hutchinson from the College to discuss the future balance of the Supreme Court under the Trump administration. The event took place at the Law School and was co-hosted by the Institute of Politics.

In light of Neil Gorsuch’s pending nomination to the highest bench of the land, speakers weighed in on a range of issues including Gorsuch’s judicial style, the future ideological leaning of the Court, and the political implications of this nomination for the country.

Stone began his remarks by stating that Gorsuch should not be confirmed to the bench. He explained that had Justice Scalia passed away this February and President Trump nominated Gorsuch to fill that vacancy now, he would have supported the confirmation. Stone said that while he personally disagrees with Gorsuch’s judicial record, the latter is “clearly qualified and clearly ethical,” and would have been an appropriate choice for “a very conservative president to replace a very conservative justice.”

However, the vacancy left by Scalia, which President Trump now intends to fill with Gorsuch, is in fact a vacancy that opened during President Obama’s term. In Stone’s opinion, the Senate Republicans’ refusal to consider President Obama’s nominee Merrick Garland in 2016, who was “reasonably moderate, clearly qualified, and clearly ethical,” was completely unacceptable.

Stone pointed out that in the last 75 years, every nominee to the Supreme Court who met the above three qualifications was confirmed to the bench. He called Senate Republicans’ usage of the timing of Garland’s nomination as a justification for their refusal to consider him “historically disingenuous and dishonest”. “Thirteen presidents have nominated justices in the final year of their terms, and [the justices] have been confirmed,” Stone explained.

Stone called on Senate Democrats to filibuster the nomination. “It is not about two rights [making] a wrong. It is about preventing a wrong from being completed,” said Stone.

If not Gorsuch, then who? Stone believes that Trump should nominate a moderate conservative who is analogous to Garland, but on the right. 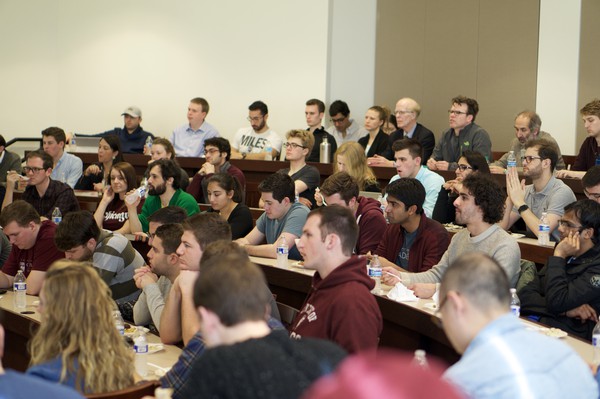 Students listen to professors discuss the future of the Supreme Court in a packed room at the University of Chicago Law School.

Largely perceived as a constitutional originalist who aligns with predecessor Scalia, Gorsuch, if confirmed, will likely tilt the ideological leaning of the Court to the right again. However, Baude pointed out that despite his presumed similarities with Scalia in legal philosophy, it is still reasonable to expect some divergences between Gorsuch and Scalia on many social issues. Even when the votes are similar, Gorsuch will likely adopt a different tone in his legal opinions.

“You will certainly not see the kind of opinion [Justice Scalia wrote] in Lawrence v. Texas,” Baude said.

Looking beyond Gorsuch, all speakers agree that the likelihood of Trump having an opportunity for a second nomination is high. Stone said that it is reasonable to expect another Gorsuch or Scalia-like figure. LaCroix added that she wouldn’t be surprised if a judge to the right of Gorsuch is nominated. In any case, the Court’s continuous tilt toward the right seems inevitable in foreseeable future.

“And the consequences of that?” Stone said, “The consequence of that will be we now have the most conservative Supreme Court in anyone’s living memory.”