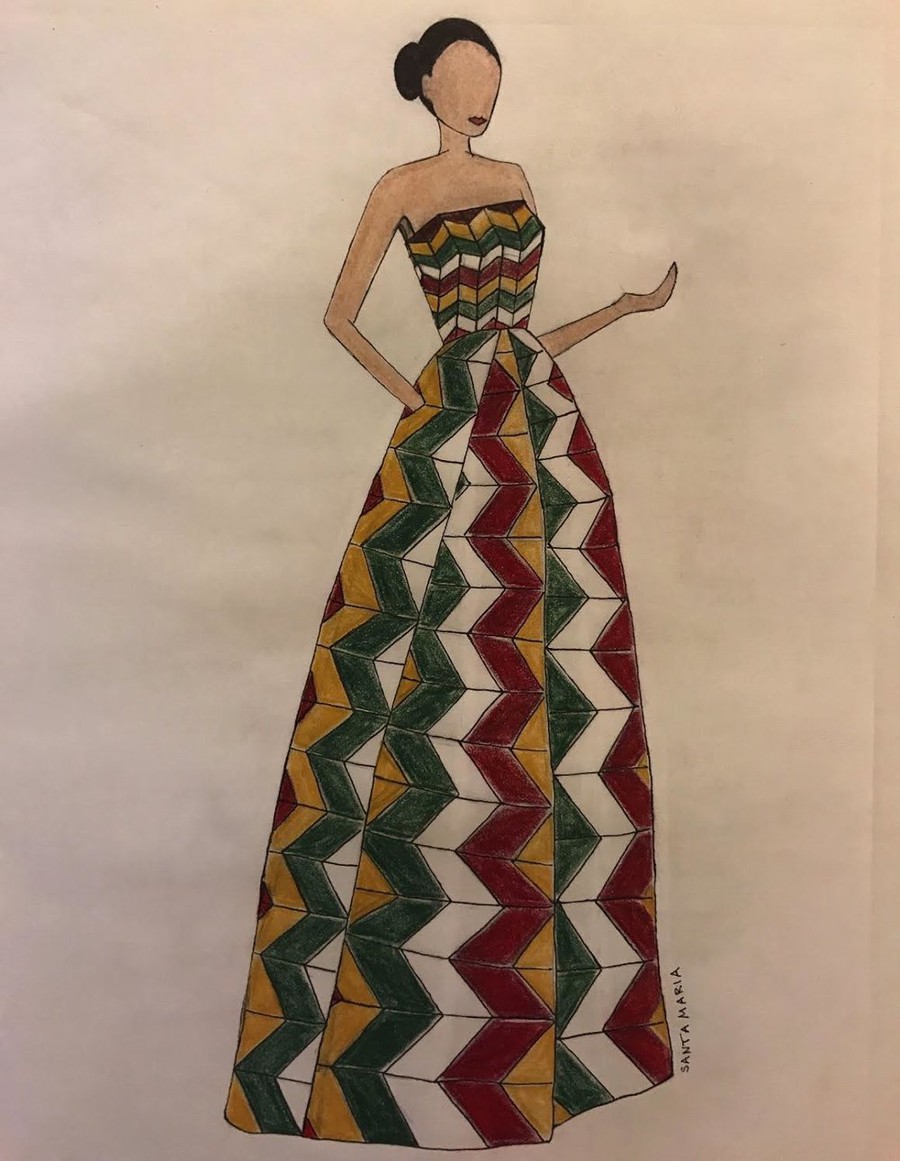 Fourth-year Serina Wu’s sketch offers a sneak peak of a dress design in her collection.

Planning for the annual show begins at the start of each academic year, according to second-year Leslie Jones-Dove, the backstage manager. It starts with the venue search.

“Once the venue is finalized, or in the process of being finalized, we begin to focus our efforts on fundraising and other MODA events such as magazine launch parties and the MODA x Madewell shopping party,” Jones-Dove said.

These preliminary events enable MODA to host its annual show, drawing crowds of more than a thousand every year to the most coveted Windy City venues; in previous years, the show was held at Union Station.

MODA, the RSO behind MODA Magazine and its online sister publication MODA Blog, organizes the show as an opportunity to celebrate student designers and local professionals. The event features a pre-show cocktail reception, a silent auction, a musical performance, live entertainment from fusion dance group Maya, the main runway show, and an after-party.

“I really appreciate how they let anyone in the University apply to design,” said second-year Talia Friedland, one of 22 designers for this year’s show. “I never would have had this opportunity otherwise because I have no connection to MODA outside of being a designer for the show.”

Friedland has been designing clothing since she was eight years old, when her parents would bring her to Walmart and let her pick out fabrics.

“You can imagine the beautiful clothes I made from discount Walmart fabric!” Friedland joked.

As she grew older, she went on to design an outfit for each member of the band One Direction, a result of a “most embarrassing crush” on the band. “Sadly, they only sent me a postcard with their autographs on it as a thank-you,” she said.

However, Friday’s fashion show will allow Friedland and other fashion-savvy students on campus to design pieces for models a bit less elusive than, say, Zayn Malik. First-time designers can apply to MODA’s Designer Boot Camp, a year-long curriculum to teach interested students the basics of fashion design. Students enrolled in the program show their creations alongside the work of more experienced designers. Models for all of the student designs are chosen through an open casting call early winter quarter. This year, there are more than 200 student designers, models, and volunteers involved in realizing the production.

A graduate of Designer Boot Camp, Friedland was inspired by the Manus x Machina costume exhibit she saw at the Metropolitan Museum of Art over the summer, which explored the interplay of technology and clothing.

“I loved the use of lights paired with the sleek modern designs, so that’s what I went for with my collection,” Friedland said.

Her own designs for MODA XIII will also light up. One model will wear a dress made entirely of pink pleather (after a fabric-ordering mishap left Friedland with much more of the material than she originally wanted).

Such creativity is a hallmark of the MODA show. Last year, models sported designs that featured paper animal heads, clear plastic raincoats, and Greek goddess–inspired dresses, as well as menswear capes and jackets made from nylon backpacks.

An opportunity for students to celebrate the talent of their peers, the show is also a chance for the entire student community to showcase their own sense of style. Similar to fashion weeks around the world, one of the most notable features of MODA’s fashion shows is the outfit choices of audience members.

“My parents flew from Maine all the way here last year to see my first collection, and my dad, who got his master’s at UChicago back in the ’80s, was stunned to see how fancy and attractive all the UChicago students were at the show,” Friedland said. “He was like, ‘This is not the UChicago I remember!’”