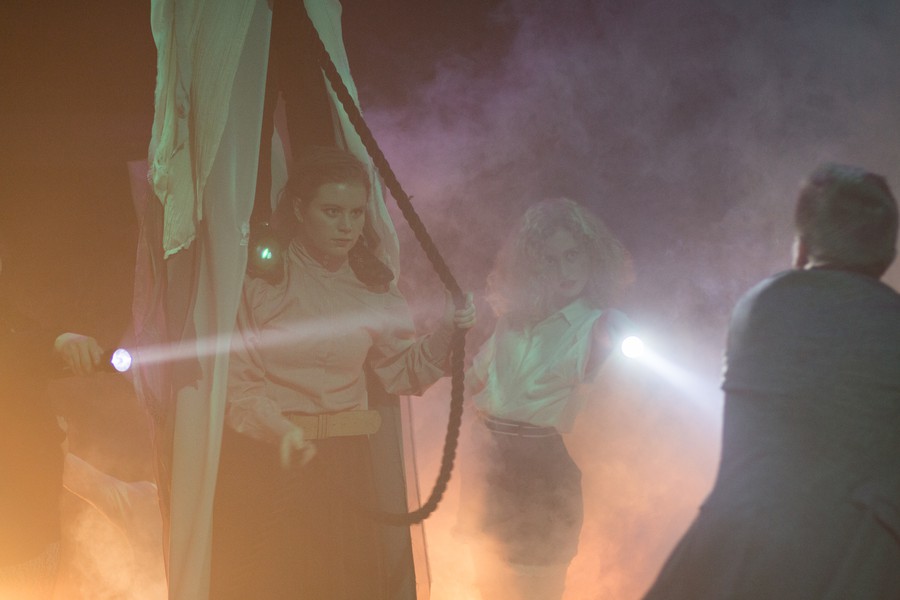 Last weekend, theatergoers experienced a long nightmare with occasional dream sequences in the Logan Center’s Theater West. Through Circe, directed by fourth-year Gabriel Garey Levine, they traveled on a horror-ridden journey through bars, brothels, shadowy alleys, and the darker corners of memory and imagination.

Circe, the 15th chapter of James Joyce’s Ulysses and the inspiration for this piece, is written in the form of a script that is nearly impossible to follow. After an announcement encouraged the audience to move around the space, the immersion into the piece began immediately in the dream-like space between Nighttown, Dublin’s red-light district, and the hallucinations experienced by Leopold Bloom and Stephen Dedalus. 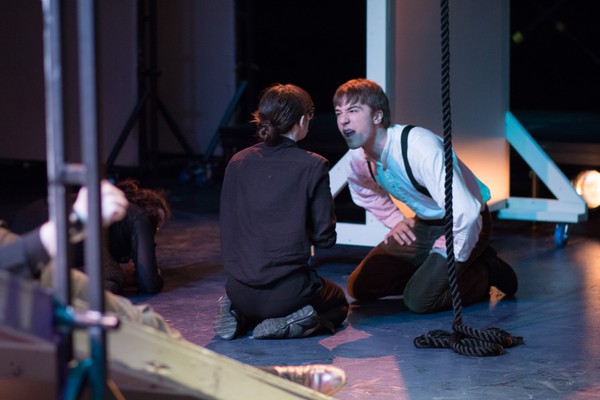 Driving the fantasy of the action was the sparse set, designed by second-year Maya Jain. The seven actors moved around eight white rolling screens to create the landscape of the play. The screens often obscured part of the action from certain perspectives, forcing audience members to either move to see the actors or stay and listen to their voices. The players soon revealed the screens to be convertible, transforming them into mirrors, rings, torture tables, and puppeteer sticks, with some screens breaking apart and coming together again and others altered by removing a white sheet or shining a blacklight.

The lighting of the play set an eerie mood and drove the weirdness of the piece. It shone purple, pink, and blue on the white screens and several white costume pieces, painting the scene with a unifying glow. In particular, the pink light was a pun on the play’s setting in Dublin’s red-light district, and a strobe added intensity to some of the dream sequences. A blacklight revealed vines crawling up the sides of white screens, a dizzying set of circles in the center of the floor, and a skeleton painted onto the prostitute Zoe’s skin. 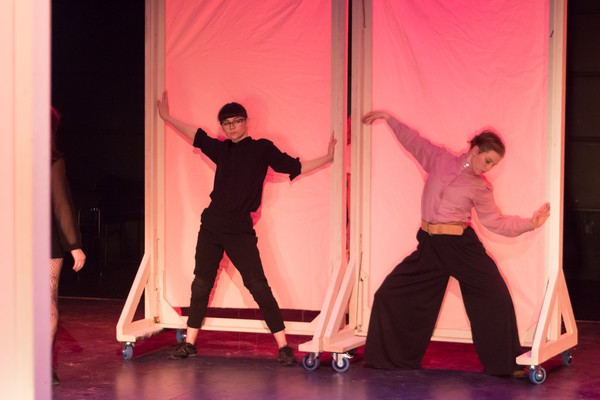 First-year Hope Gundlah stole the stage in her expressive rendition of Zoe, a prostitute from the brothel that Bloom and Dedalus visit. She was coy and nuanced throughout, and even performed impressive acrobatics on a trapeze. The other brothel workers came to life too, floating in and out of reality and Bloom and Dedalus’s fantasies. At one point, Bella, portrayed by secon-year India Weston, became the larger-than-life floating corpse of Dedalus’s mother. Brothel workers turned into nurses in the scene where Bloom gives birth to eight children in his own fantasy. Several actors took on secondary roles at one point or another, lending new meaning and depth to their original parts. The sparse set and frequently nonsensical lines let the actors carry the show with their movement, and they rose to the occasion with energy and weirdness.

Circe was profoundly odd, oscillating between wacky and frightening. The lines between fantasy and reality were hazy, and the emotional arc swung sporadically from joyful to horrifying without losing its ominous air. This play was an unsettling and wild interpretation of Ulysses, a book that is notoriously imagined and analyzed in a myriad of ways. There will never be another interpretation of Ulysses quite like this one, and I have never seen any show like this one on a University Theater stage.

It was previously written that third-year Cori Mayer portrayed the corpse of Dedalus's deceased mother. It was in fact second-year India Weston.