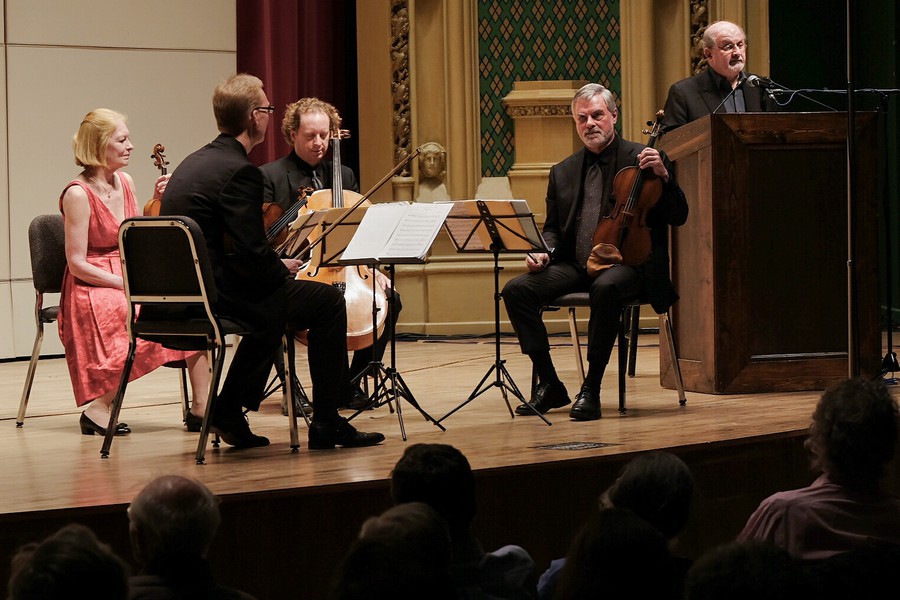 “It all began at Denny’s,” Sir Salman Rushdie joked on Friday night.

The decorated British-Indian novelist appeared in Mandel Hall in partnership with the world-renowned American String Quartet for this weekend’s Midwest premier of composer Paul Cantelon’s Suite for The Enchantress of Florence. Cantelon first conceived of the work while breezing through Rushdie’s 2008 novel of the same name over a cup of coffee at America’s favorite diner.

“Yes, it’s her story, but, along the way, it’s the story of empire, power, humanism—the time of Machiavelli,” Rushdie said.

Child prodigy and score-writer Cantelon easily succumbed to The Enchantress’s allure. He collaborated with the American String Quartet to draft a six-movement sonnet to the text, giving voice to Rushdie’s lyrical prose—and letting it speak for itself. At the close of each movement, Rushdie read a short segment of his work, creating a hybrid art form that was more akin to a mass than a showcase of classical music.

“Personally, I’m a preacher’s son,” Cantelon said, supremely humble. “The passages were roughly chosen because the book is so sensuous and so inspiring musically. I didn’t try to rewrite them.”

“And there would be copyright issues,” Rushdie added, eliciting laughs from the audience.

Even an hour before Friday’s designated start time, Rushdie and Quartet fans queued up outside the performance hall, many clutching copies of Rushdie’s Booker Prize-winning Midnight’s Children. Rachel DeWoskin, lecturer in creative writing, kicked off the evening with a pre-concert artists’ chat: Rushdie, Cantelon, Peter Winograd (violin), Laurie Carney (violin), Daniel Avshalomov (viola), and Wolfram Koessel (cello) touched on the logistical evolution of the suite and the art of lyrical translation (or, in the words of Cantelon, “cross-pollination”).

“Well, we couldn’t find a Denny’s, so we went to a French bistro on the Upper West Side,” Avshalomov said, reliving the Quartet’s initial meeting to discuss the atypical project.

The Quartet first ran through the suite without context, but as the musicians began to enter a fantastical Renaissance Eurasia, they reworked the score and refined the textual selections, seeking to encapsulate not a plotline but the portrait of a world. 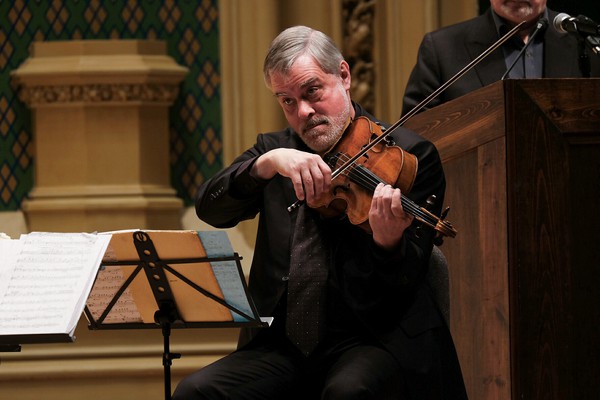 “It’s childlike—not really masculine or feminine, but it’s a woman’s story. A woman in a man’s world,” Cantelon said.

The promised hour-long Q&A concluded after an unsatisfactory 20 minutes as the artists headed backstage to prepare for the two-part program: the headliner, Cantelon’s suite (which would prove to take twice as long as expected), followed by an under-promoted treat, Beethoven’s String Quartet No. 13 in B-flat Major. Mandel quickly swelled to capacity.

Cantelon’s suite began at the end: death on a battlefield. The Quartet started with a soft ode to the fallen—a short preface to Rushdie’s thick, mournful British accent as he read from a red-bound copy of The Enchantress, littered with Post-its:

“There is a weakness that comes over men at the battle’s end, when they become aware of the fragility of life, they clutch it to their bosoms like a crystal bowl they almost dropped, and the treasure of life scares away their courage.”

The words rained down like gospel. They were sweet, and they were sudden—a disarming leap from self-congratulatory banter to resigned poetry. As Winograd picked up the melody once more, visibly lifting off of his chair, the twin voices of bow and spoken word embarked on a sad, strange duet.

Rushdie’s second vignette: Machiavelli reclining on the edges of a farm, contemplating the movement of a woman’s body like a stream over pebbles. Rushdie played the part; he taunted the audience with tales of romance and hidden truths before giving way to Avshalomov on viola, who carried Winograd’s theme with echoes of classical Indian rhythms.

The novelist’s third solo rivaled only the first in its lyricism. Rushdie read the triumphant monologue of Angélique, daughter of Jacques Coeur of Bourges, whose repeated epithet melded into a pulsing beat before Rushdie veered into a disturbing meditation on slavery and the utility of fear, a Mughal Machiavelli.

The artists, however, grew tragically unsynchronized over the next few segments. Rushdie became more animated; he fished for laughs, talked history, and gesticulated. The Quartet, meanwhile, remained serious, matching cheer with somber mien, and at all the wrong moments.

The final segment carried the work full circle. Rushdie read it like a hymn: confronted with drought, Akbar must lead his people out of Sikri in search of a better future. This prince, like the half-dead warrior on the opening battlefield, must come to terms with the impermanence of life. It’s an utterly spiritual moment of survival, and of civilization. Winograd drew out the tantalizing final notes, marking the end of a directionless journey within an impossible world.

“Each time I hear the music, I hear the rhythm of the book more in it,” Rushdie said. “Now, I’m beginning to feel the shape of the text in the music.”

Weak in isolation, Cantelon’s suite was not a musical masterwork. Yet in context, it gave life to a strange new art form. The interplay of music and prose even bled into the second portion of the evening; when the Quartet returned after intermission to treat the audience to a little Beethoven, Cantelon prefaced the performance with a reading by the master himself.

“Even in bed my ideas yearn towards you, my Immortal Beloved, here and there joyfully, then again sadly, awaiting from fate, whether it will listen to us. I can only live, either altogether with you or not at all,” Beethoven wrote.

Does he call to an unnamed lover? To music? To God? His words, like those of Rushdie’s countless lovers, elevate love to the divine. Friday’s program—a seemingly incompatible mix of classical and contemporary—found unity in giving voice to its artists.

“They both create entire worlds,” Avshalomov said. “Neither one of them ignores what has come before: Rushdie with history, Beethoven learning from Haydn, Mozart, everybody. He opened all types of doors that contemporary composers are still walking through.”