In Conversation with Riccardo Frizza: The ABCs of a Bel Canto Opera

"If you forget the orchestra, that means you are really concentrating on the story onstage."

The Lyric Opera's current production of Bellini's epic Norma is its first in two decades—the leading role is among the most technically demanding in the dramatic soprano repertoire, requiring great stamina, power, and vocal agility. Norma follows the betrayed love of Norma (Sondra Radvanovsky), high priestess of the Druids, by her lover, the Roman consul Pollione (Russell Thomas). His eyes and heart have wandered to Adalgisa (Elizabeth DeShong), a young priestess serving under Norma... provoking her wrath.

I spoke last week to conductor Riccardo Frizza about the his approach to bel canto works and his journey with Norma at the Lyric.

Chicago Maroon: I wanted to start with how you were introduced to these bel canto works that have built up your career.

Riccardo Frizza: My approach to bel canto was a late one. When I started my career, I was particularly involved with symphonic repertoire, as music director at an Italian orchestra until 2001. My first experience with opera was with [Peruvian tenor] Juan Diego Flórez when he was at the beginning of his career, through recitals with the orchestra. I conducted the arias—and from there stepped to the opera.

CM: I spoke to Riccardo Muti [music director of the Chicago Symphony Orchestra] a few years ago and he emphasized the importance of come e scritto in his operatic career. Do you share this passion for performing works “as was written” by the composer?

RF: I do believe in come e scritto, but that does not mean you are not free with interpretation. Making cuts to the vocal lines, I think is not good. But alterations to the vocal line was one of the aspects of bel canto.

In Italian repertoire, arias have repetitions and if you repeat without variations then it makes no sense. In the ’40s and ’50s, the repeated cabalettas [quick, final section of the aria] were cut because they were performed exactly the same with no variations. If you do the repetition, that means you have to do something different seconda volta [the second time]. This is important. That was the way [the original performers] did it. After we discovered that, then we have to do it as [faithful] interpreters.

CM: My issue with bel canto is that sometimes it can all sound very similar, especially when the dramatic material isn’t the most robust.

RF: Above all, you need good interpreters. When you do a Romantic Italian opera—like a Bellini or a Verdi—you need to tell a story. Drama for me is primary. And you have to be able to keep the tension in the story without dropping it. This is up to us—the conductor and the interpreters on stage—to be able to keep the tension even when some pages are not so well done. We can be very reverent to the composer and not cut them, but we also have to be honest. We have miraculous pages, and we also have just good pages. It depends on the interpreter making these pages interesting. It’s a matter of the conductor, the interpreters on stage, and the director as well.

CM: Sondra Radvanovsky is singing Norma in the current Lyric production. You previously did Maria Stuarda at the Met last year. What’s it like working with her again?

RF: I did Norma at the Met with her in 2013, so this is our second Norma together. I think she is one of the greatest today in this dramatic soprano role—because she has everything. She has the power, she has the beauty of the voice, she has the technique to sing whatever she wants—even pianissimo in the high notes or whatever. She has the strength in the words; she’s able convey the drama because she’s able to do the declamato. And she’s a good musician and easy to work with. Performing opera, and music in general, is a matter of exchange. I give her something, she gives me something. And opera is the greatest compromise. 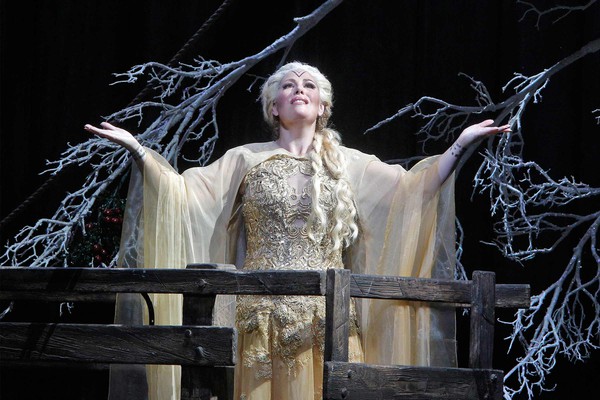 Sondra Radvanovsky as the Druid high priestess Norma. "I think she is one of the greatest today in this dramatic soprano role—because she has everything."

CM: I wanted to ask you what kind of productions you like to work with.

RF: I changed my mind in the last two years. I used to expect something traditional, to see all the elements in the score. Now, the question is: why we put on stage operas written in the 18th or 19th centuries? Of course the reason today is not the same reason the composer did two centuries ago. Couldn’t be the same because society is different. For example, I did Oberto—Verdi’s first opera—at La Scala in 2013, which is about [infidelity] and revenge. Today in our society, infidelity is almost quite common. It is not something that touches the soul of the audience anymore. The director transposed the action in the only place in Italy where something like this still existed—in the south—where infidelity and vengeance are still important to society. It was a great success. I was happy to see a modern transition for the opera.

That cannot happen in Tosca or Traviata [both operas that depicted courtesans and their relationships]—today you hop online and there are escort websites everywhere. It doesn’t make sense anymore, so we need to try something different. You can still do it, but there’s not the same result to the audience as in Verdi’s time. Presenting on stage a mistress was not so common or accepted by society. So always we need a reason, and it’s up to us to find something new to say to this world.

CM: What’s new in this production of Norma?

RF: It’s quite traditional actually. It exactly follows the libretto. The important thing in this kind of Norma is to understand the relationships between her and Pollione [Norma’s ex-lover], her and Adalgisa [Pollionie’s new lover], and the reason why she [sacrifices herself rather than throw] Adalgisa in the fire.

CM: How do you assert the presence of the orchestra in Norma, when the music is so driven by the singers?

RF: In Norma, the orchestration is committed to the singers and to the vocal line. This is the reason why Bellini wrote it so lightly and so transparently. You want it to [invoke] a different level of imagination—something more subtle. For example, in the last aria when she’s begging her father to take care of her sons, the first horn plays ostinato notes. The French horn I think is invoking her pain of leaving her children. Sometimes you don’t need 20 instruments, you need just one instrument committed to something very specific.

CM: When an opera is so scored as simply (in relative terms) as Norma, I sometimes tend to forget about the orchestra entirely…

RF: That is good! If you forget the orchestra, that means you are really concentrating on the story onstage. You are really deeply emotionally involved with the show. That is good. I love when I do bel canto and critics forget to talk about me—because the less important [I seem], that means I created a moment on the stage where you are deep in the drama.

CM: I’ve always thought of bel canto as being both accessible and challenging at the same time. It’s very easy to listen to in terms of melody, but harder to follow as the music can be very similar from one scene to the next.

RF: I think the audience has different levels of musical knowledge. There are people that can’t read music and have never studied it but are very sensitive and feel something when they listen to music. When I do music, I do it for these people—because they are pure people. There’s also the audience that has more knowledge about music, which can change their approach as a listener. Of course, if you understand Italian or if you prepared—I always suggest people to prepare before going to the theater—I’m sure that the more you have prepared, the more you can get from the performance.

CM: One of the things I love about opera is that it takes investment to get all I can out of it. How do you get people to work for enjoyment rather than gratify themselves instantly as they have the ability to do?

RF:  Well, doing an interview with you—letting people know that at least if they go on Wikipedia and read the synopsis that’s just better than buying a ticket, wasting $150  for two people (at least), sitting down… and after half an hour getting bored because you don’t know where in the world you are. Basically, to make divulgare [to preach something]. This is important on the part of the artist, but also people like you. They have to teach. I think opera is the biggest form of art: Every aspect is important [to the whole] and so of course sometimes it’s not easy to understand. If you go to see Cenerentola [Cinderella] by Rossini it’s easier because you know the story. But Norma is not so easy.

Norma runs through Feburary 24 at Lyric Opera of Chicago for five more performances only.

This article originally quoted Riccardo Frizza as identifying Juan Diego Flórez as a Mexican tenor. He is Peruvian.