Broken Records and Hearts for Chicago 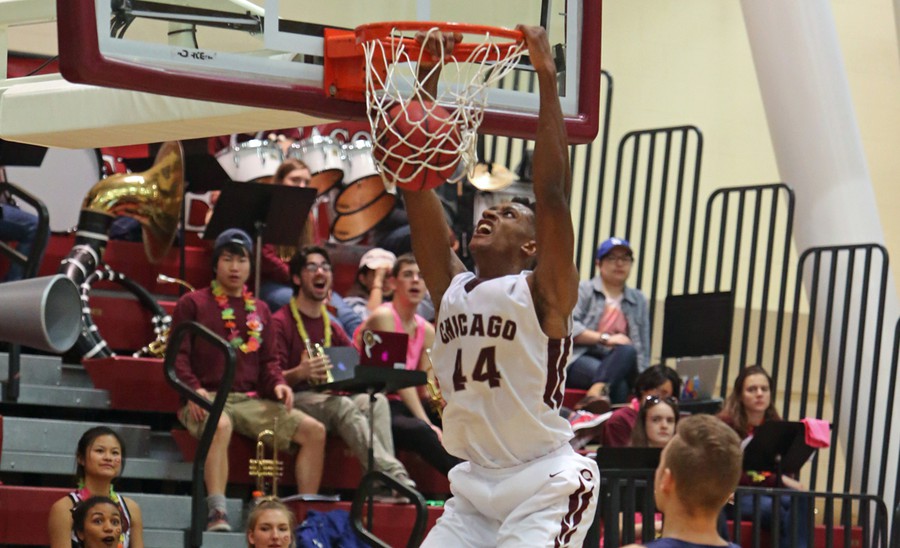 The University of Chicago men’s varsity basketball team (12–8 overall, 4–5 UAA) went 1–1 in a pair of home games this weekend against University Athletic Association (UAA) opponents, dominating Case Western Reserve University (5–14, 0–8 UAA) in a beatdown Friday night before falling to Carnegie Mellon University (11–9, 5–4 UAA) Sunday morning in an overtime thriller. The results were identical to last weekend, when the Maroons also beat Case Western on Friday before falling to Carnegie Mellon on Sunday.

The result of starting a young lineup and having a limited bench was the Maroons’ most complete game of the year, as they led wire-to-wire in a 99–73 shellacking of Case Western. The team was led by Karras, who put up 39 points, and Jacobsen, who put up 14 points and 13 rebounds.

Karras shot an impressive 11–14 behind the arc, setting a new University of Chicago record for three-pointers in a game. The record had been previously set just five days before by Fenlon.

“Case gave us good looks behind the arc and, thanks to our team, I was able to take advantage of that,” Karras said. “Jake and I are always going back and forth with three-pointers, so it’s funny that he broke the record last week and I got it this week. Jake’s an outstanding shooter, so I wouldn’t be surprised if Jake got the record again.”

Sunday morning did not go as well for the Maroons, as they lost to Carnegie for the second time in 8 days, this time in an 85–83 overtime showdown. The Maroons could not stop Carnegie’s Jack Serbin or Ryan Maha, who combined for 50 points.

In a back-and-forth game that saw the Maroons down by two points at halftime, it came down to the final seconds as Chicago could not tie it back up again as time expired.

“It’s always frustrating to lose, and especially to lose to the same team twice,” said Howard. “The team will come back from this loss though, and now we are focusing on Rochester.”

Howard scored 14 points and led the Maroons with seven assists while Crawford led the team with 25 points in a double-double.

The Maroons’ next game is this Friday at home against Rochester.