Protesters Demonstrate Against Trump and U of C, Call for Better Campus Working Conditions 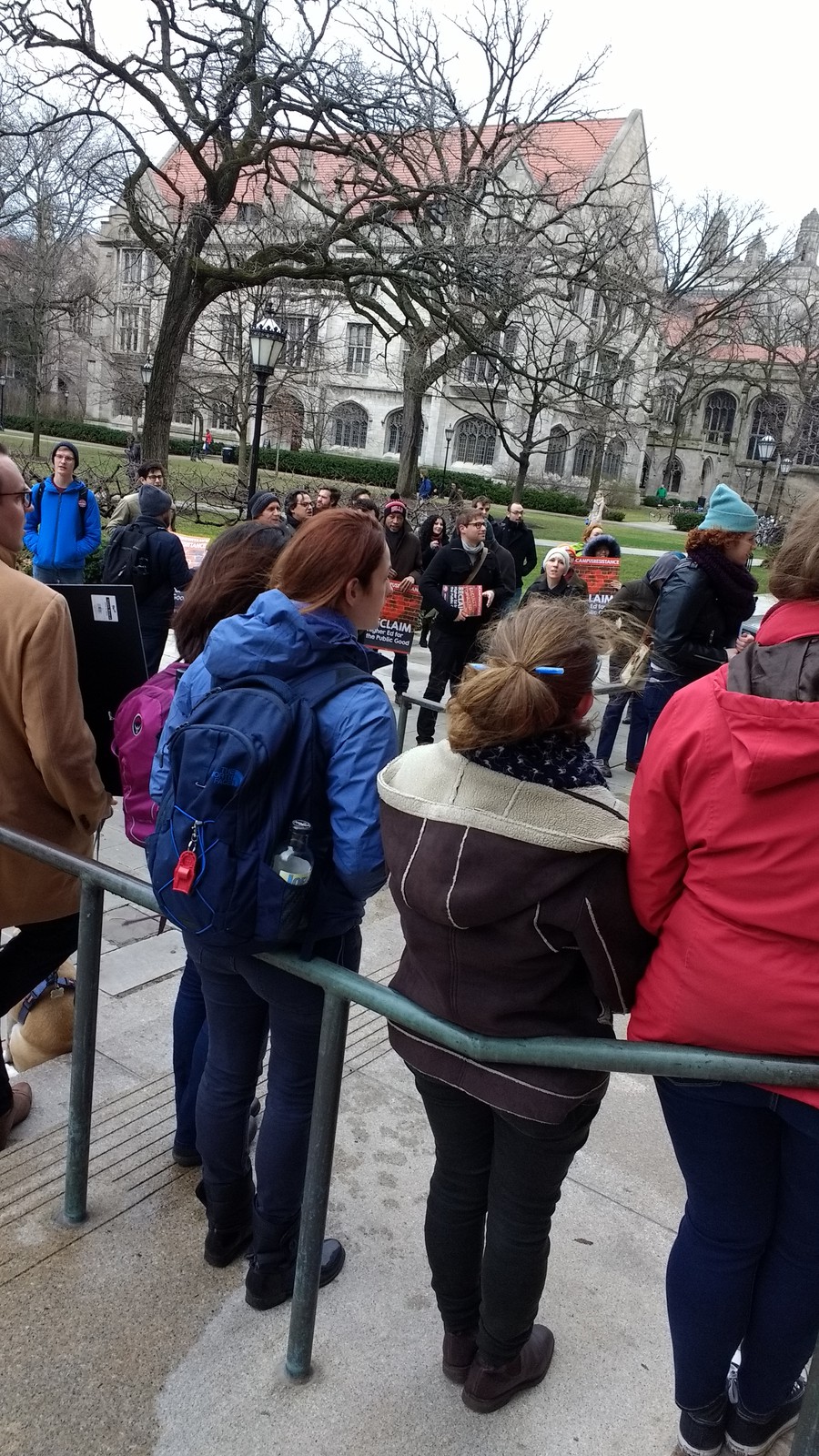 Students and faculty gathered Wednesday to protest for higher graduate student employee pay rates, better treatment of non-tenure-track faculty, and improved health care for students and workers as part of a nationwide series of university protests.

The protests—organized under the hashtag #CampusResistance—were coordinated by the Service Employees International Union (SEIU) to protest Trump’s so-called “corporate cabinet” while advocating for higher wages for educators, according to the union website.

About 50 people, including graduate students, building engineers, and lecturers, assembled in front of Levi Hall, holding signs and shouting chants like “Get up, get down, Chicago is a union town,” “Deductibles destroy,” and “Save our healthcare.”

Senior Lecturer Jason Grunebaum is a member of the bargaining team of UChicago Faculty Forward, a group in the process of unionizing which supports non-tenure-track faculty. Grunebaum led the group in chants and introduced each speaker.

“Since I’ve been teaching here, I remember my part-time faculty colleagues being very happy when Obamacare was passed, but right now all of that is being taken away,” Grunebaum said during the protest. “We want to send a message to the University administration that there are two choices: either be complicit with the Trump administration agenda, or make sure that every person in our community has access to health care, so no one risks their livelihood because of getting sick.”

“I can say with conviction as a medical student that everyone deserves access to affordable healthcare,” Kim told The Maroon. “I believe that denying someone health care is a denial of human dignity. I cannot imagine looking a patient in the eye and telling them that they do not deserve health care, and that’s why I’m standing in solidarity.”

Ph.D. candidate Trish Kahle said she was speaking on behalf of Graduate Students United. She said that the University continues to make budget cuts, which she said impact health care coverage for non-tenured faculty, despite having enough money to avoid these cuts.

“They can provide world-class health care to every single person on this campus,” Kahle said. “When you have to pay $1,000 out-of-pocket for out-of-network care, you don’t have health care. You have it on paper, but you don’t have it in real life.”

“The fight of students to obtain the services we need is directly connected to the struggle of part-time teachers and all other workers in this university,” Holmberg said. “We all suffer when the University administration values their bottom line more than people’s lives.”

Stephen Clarke, a member of Local 73, said he attended the rally to demonstrate trade workers’ solidarity for teaching assistants.

“I’m making better money than a lot of TAs are, and they have more education than I do,” Clarke said. “It’s difficult to live on the wages TAs make. There have to be more equitable solutions, like higher wages.”