His Muse Is Metaphysics:The Art of Jitish Kallat 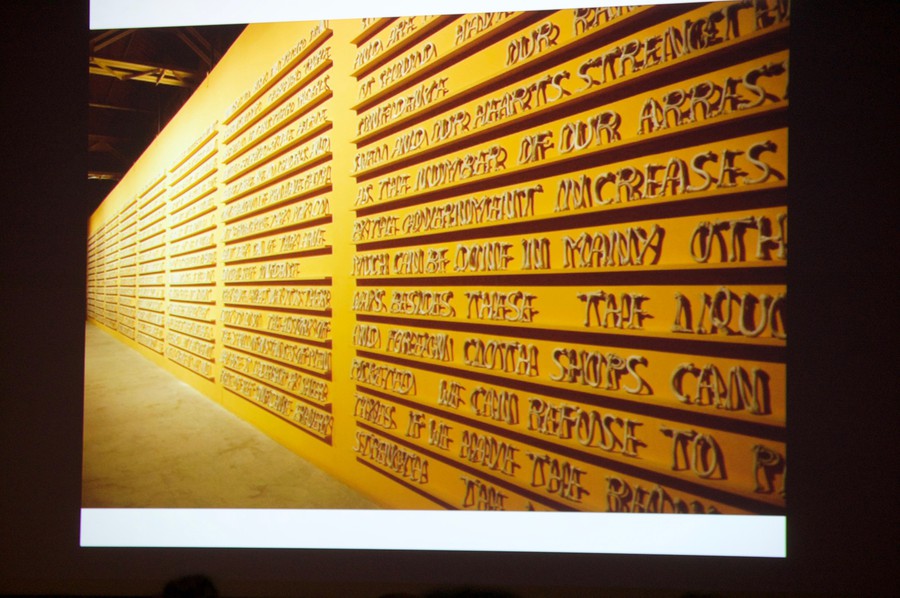 "Public Notice 2", a collection of over 4,000 fiberglass sculptures that invokes a historical speech by Gandhi.

On Monday, renowned Indian contemporary artist Jitish Kallat delivered a short talk at the Logan Center as part of the tour for his Here After Here exhibition, currently at the National Gallery of Modern Art in New Delhi. Kallat discussed a variety of his multimedia works, speaking on his artistic process.

In his work, Kallat plays on the theme of cosmology as a symbol of the metaphysical.

Epilogue, a beautiful labyrinth of photos, features the roughly 22,000 different moons that Kallat’s father would have seen during his lifetime, replacing them with traditional Indian roti bread. The effect was a touching tribute to Indian life and culture. Kallat’s latest project is a highway roundabout in Germany made of road signs, bent into mobius strips and arranged into a towering flower-like structure. The signs—with directions to everywhere yet nowhere—serve as both the promise of a new path and as a reminder of the infinite size of the universe. 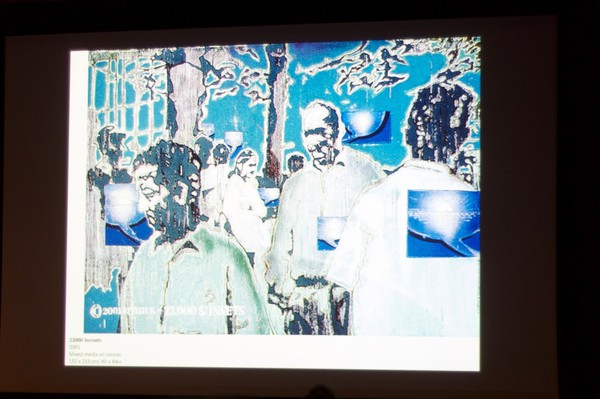 "22, 000 Sunsets" (2001) an "urban moment" that simultaneously captures every sunset the artist's father ever saw

Kallat meditated on the themes of creation and revelation throughout the talk—revelation, not so much in finding something new, but in finding the new in something. One work titled Sightings (d9 m4 y2015), an extreme close-up of fruit, blurs and changes color as the viewer engages with the work from different angles. In this way, seemingly static fruit takes on an extra dimension, revealing the metaphysical embedded in the quotidian. Another work, annexation, builds upon this idea in sculpture form: Kallat rebounded and repurposed images found in metro stations, making art of trash. Pieces like The Cry of the Gland, a wall made up of a photo collage of people and the back pocket of their pants, also drew attention to an easily-overlooked aspect of the everyday.

From fruit to experimentations with fire, the exhibit explored the power of nature and human interactions with it. The Infinite Episode aligns various sculptures of different sleeping animals, and Sacred Geometry (covariant) features 150 different human and animal eyes. In another series, Kallat laid lines of flammable liquid on paper, set them on fire, and left them outside to the whims of the wind. Combining these two elements together—fire and air—with a light human touch, Kallat’s transient fire drawings elegantly explore the delicate balance between control and freedom.

Kallat’s most touching piece, Covering Letter, features a 1938 letter from Gandhi to Hitler, begging him not to go to war, projected onto a wall of recycling water; the words are almost invisible until the audience approaches the wall. This piece perhaps most directly reflects Kallat’s philosophy that art is not so much about what you create, but the way you get people to look at things.