JLCO and CSO Join Bands to Jazz Up the Classics 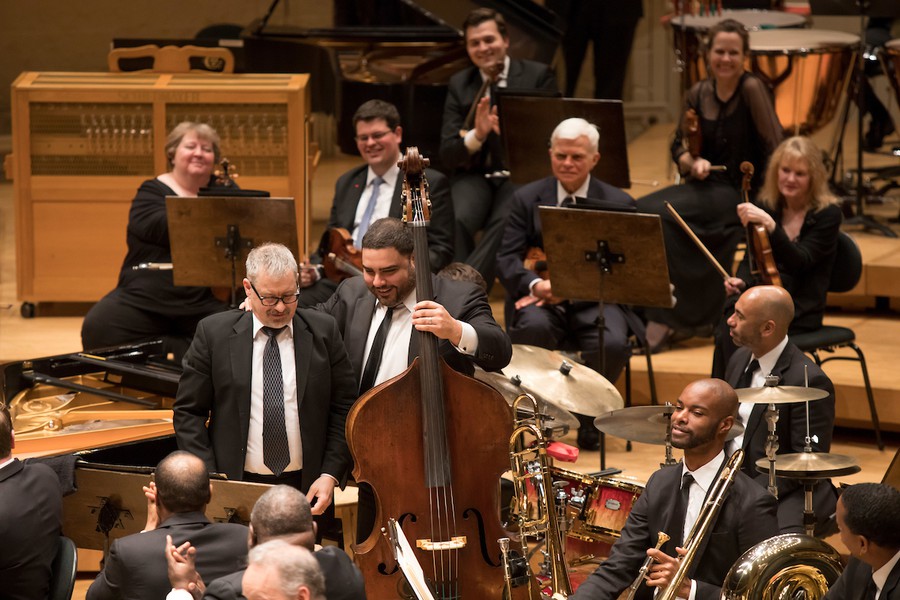 In Absolutely on Music, Haruki Murakami quotes Duke Ellington: “There are simply two kinds of music, good music and the other kind.”

“In that sense, jazz and classical music are fundamentally the same,” Murakami wrote. “The pure joy one experiences listening to ‘good’ music transcends questions of genre.”

The concert hall at Symphony Center seemed more packed than usual last Friday night, and not only in the balconies. The Jazz at Lincoln Center Orchestra (JLCO) managed to squeeze into a space between the conductor and strings: a cluster of chairs, a piano, and a set of drums.

Friday marked the end of the JLCO’s three-day Chicago residency. It’s been a decade since the first collaboration between the two orchestras, and the turnout on Friday night showed that their collaboration has been enthusiastically welcomed, if not sorely missed, year after year. Bandleader and trumpet virtuoso Wynton Marsalis brought his venerable ensemble to the Windy City on Wednesday, starting his time here with a concert for the Symphony Center Presents Jazz Series. On Thursday he and the JLCO introduced the life and music of Count Basie to students at the Carl Schurz High School as part of its Jazz for Young People program.

Friday evening’s concert opened with what conductor Edwin Outwater called a “classical appetizer,” Mikhail Glinka’s Overture to Ruslan and Ludmila. The program then fast-forwarded a century to Duke Ellington, whom Outwater considers one of his favorite musicians in any genre. The River, which was first performed at Lincoln Center in 1970, is one of the few classical pieces that Ellington composed.

“You can kind of hear where Duke Ellington would have gone if he had explored the world of orchestral writing,” Outwater said.

The CSO played three movements from The River: “Spring,” “Meander,” and “Giggling Rapids.” “Meander” effortlessly channeled the blues tradition with its trawling tempo and use of jazz-style percussion. “Giggling Rapids” opened with a cheerful piano solo, followed by bold brass notes paired with adept violin runs to round out the piece. Both movements posed rhythmic and technical challenges, but the musicians ably rose to meet them.

The CSO then brought in the JLCO for the next and most notable piece of the program, Modest Mussorgsky’s Pictures from an Exhibition—but with a jazzy twist. As Outwater explained, Ellington had a tradition of taking classical pieces like The Nutcracker and interpreting them in the jazz idiom. Musicians from the JLCO did the same with five movements of Pictures, specifically for this concert.

Outwater described the resulting performance as a “trading back and forth.” The CSO played Ravel’s orchestration of the piece, interspersed with jazz arrangements by the JLCO. “ [It’s] lots of different voices and imaginations bringing Mussorgsky’s music to life,” he said.

Every time Outwater stepped off the podium and sat down to let the JLCO take over with its arrangement, there was always a sense of curiosity—what would happen next? The audience chuckled when a sputtering trombone solo interrupted the CSO for the first time, its timbre so markedly different from what had preceded it. There was a wonderful sense of spontaneity, so typical of jazz music, in the arrangements.

The contrasts between the orchestral and jazz parts shone throughout Pictures. During “Ballet of the Chicks in Their Shells,” the CSO played delicately in the upper register, mimicking the tapping of chicks against eggshell. JLCO followed with the next movement, “Samuel Goldenberg and Schmuÿle”—the swinging, argumentative nature of their playing seemed more remarkable by contrast. The CSO’s solemn “Catacombs: Sepulcrum romanum” and the JLCO’s energetic, hectic “The Hut on Hen’s Legs (Baba-Yaga)” provided another refreshing juxtaposition.

The trading of movements between both orchestras sometimes seemed to fragment the piece: The JLCO would often signal its return with a crash of the cymbal or a drumroll. This tension between jazz and classical perhaps instilled a hope that they would end together. But although the JLCO found its way into the last movement through a section arranged by trumpeter Marcus Printup, the CSO finished Pictures so soundly that it almost felt like a reminder that Pictures primarily belongs to classical music. But this, of course, was hardly the point.

“Duke Ellington had all these dreams of combining jazz and classical music in a different way—and in a way that really worked,” Outwater said. Even with its alternating sections, Pictures captured a jazz-classical collaboration that was delightful for the ears and full of surprises.

The last piece of the program, Wynton Marsalis’s “All-American Pep” from Swing Symphony, saw both the JLCO and CSO unite in a way that seamlessly melded classical and jazz, featuring a solo from associate concertmaster Stephanie Jeong and powerful brass from the JLCO.

“I guess it worked,” Outwater responded to thunderous applause.

The JLCO performed Ellington’s “C Jam Blues” as an encore, inviting the CSO to improvise. True to the spirit of jazz, the encore saw moments of surprise and spontaneity. Local pianist Charlie Johnson, invited onstage by friend and musical colleague CSO Bass Bradley Opland, displayed a latent talent by playing a striking piano solo worthy of Oscar Peterson. In another memorable moment, CSO bassist Rob Kassinger delivered a bowed solo while the brass sections—for once—looked on.

On Friday, Symphony Center saw jazz and classical come together in the same hall and even in the same piece. One might wonder how many people in the audience were there for just classical music or jazz. But such distinctions didn’t matter as classical and jazz lovers alike sat side by side, equally captivated by what they heard. It was a good night for music, regardless of genre.

Local pianist Charlie Johnson was invited onstage by friend and musical colleague CSO Bass Bradley Opland to play his solo during the encore.