About a third of Muslim respondents reported a negative climate, while Jewish respondents had the next highest level of dissatisfaction. 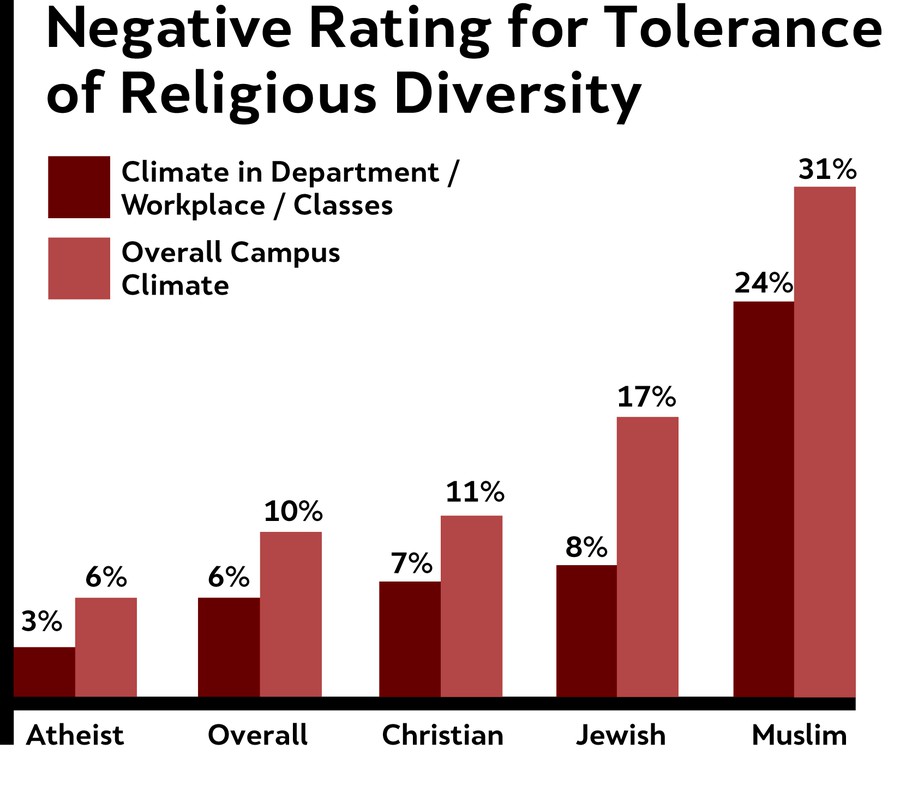 Percentages are for all respondents; numbers for students alone were typically higher. Responses coded as secular and non-religious (5%, 7%), other (5%, 10%), and no response (5%, 8%) are not represented above.

According to the 2016 Campus Climate Survey, Jewish and Muslim respondents reported higher proportions of discrimination, harassment, and disrespect on campus than other religious groups.

In general, most students had a positive opinion of the campus climate regarding religion. 80 percent of respondents felt that their “proximal campus climate” (the respondents’ classes, department, or work units) was tolerant, and 71 percent felt the “overall campus” was. Across all identity groups, people felt that their proximal climate was more tolerant than the overall campus. However, disparities in the level of tolerance for both sets of questions existed, especially with Jewish and Muslim members of the community.

A higher proportion of Muslim respondents reported a negative climate, with 31 percent responding that the overall campus climate was negative. Jewish respondents had the next highest level of dissatisfaction, with 17 percent responding that there was a negative overall climate. When looking at just students, these figures jump for all seven groups, especially among Christian, Jewish, and Muslim students, who responded that the overall climate was negative at rates of 19 percent, 21 percent, and 36 percent, respectively.

“At Spiritual Life, we do hear about such experiences [of discrimination and harassment], often from members of the Muslim and Jewish communities, as reflected in the survey results, and also from members of other world traditions for which the respondent numbers were unfortunately too small to elicit reportable data,” Jigna Shah, assistant dean of Rockefeller Chapel and director of spiritual life wrote in an e-mail to The Maroon.

The response rate was 29 percent overall, with the exact measure varying slightly among students, staff, and faculty. The report states that because the purpose of the survey was to describe group experiences, analyzing trends in the responses among groups is more informative than analyzing raw percentages of individual groups.

Fourth-year Ala Tineh, president of the Muslim Student Association (MSA), served on the steering committee for the survey, although MSA as a group was not consulted explicitly. In an e-mail to The Maroon, Tineh wrote that she was not surprised by the results but still disheartened to see that 62 percent of Muslim respondents did not feel respected at the University.

“Honestly, numbers do not mean anything when you live it day-to-day, but it is better evidence of what life is like for so many students…. What does that say about the type of people who attend this university? Moreover, I am very confused as to why these results were not included with the original report released earlier this academic year,” she wrote. Diermeier’s e-mail did not specify why the results regarding religion were released separately, but the November 2016 report specified that it only contained the “initial survey results” and that “additional data from the Climate Survey will be used to conduct in-depth examinations of important topics not addressed herein.” One potential topic listed was discrimination, harassment, and bias associated with religious affiliation.

Members of the Muslim community on campus met with Vice Provost Melissa Gilliam on Friday afternoon. According to Tineh, the meeting was not scheduled until after the results of the survey came out. Tineh had planned to ask why the religious tolerance questions were released separately, discuss the results of the survey, and brainstorm ideas to make campus more inclusive for Muslims.

“These are all part of larger issues…that include ignorance among a so-called educated population, issues with the Core Curriculum, a lack of understanding of intersectionality among administrators, and, of course, freedom of expression,” Tineh wrote.

The Maroon reached out to Hillel for comment but did not receive a response by press time.

Shah wrote that conversations about the campus climate would be ongoing. “We welcome the spotlight on these experiences, and we’ll be continuing to address campus climate issues as a major piece of what we do,” Shah wrote.

In an e-mail to faculty, students, and staff, Provost Diermeier announced two group discussions, planned for April 24 and 25, that will provide an opportunity for further reflection on the results. He also wrote that the University is developing a “comprehensive action plan” to address diversity and inclusion issues on campus that will be discussed in detail later this spring.