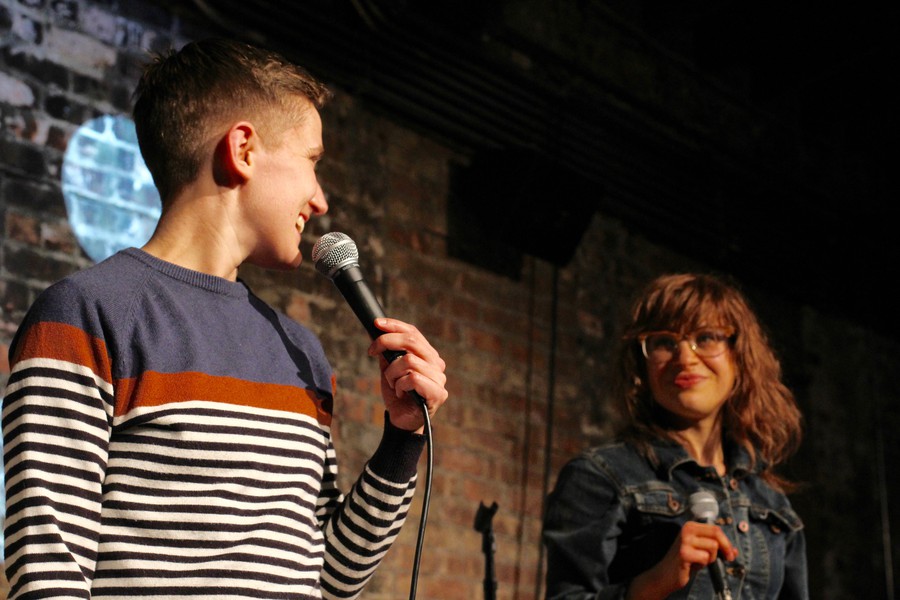 In the intimate yet crowded sea of hairstyles and springtime flannel shirts, the question, “Who here is queer…or likes queers?” was met with exuberant applause. On Friday night, queer artists took the stage at The Revival with comedy, storytelling, vocal performance, and drag for SPACE: LMAO with LGBTQIA.

The connection between performer and audience was immediate: The night was intended as a celebration of identity, not just a few hours of laughs. The audience watched performers joke, sing, and dance about being in the queer community—a subject not well represented in the history of comedy—and the performers spoke about their lives with an audience that could relate. As co-host Shannon Noll explained before the show, showcasing queer comedians “sets more of a norm where you don’t have to spend time explaining yourself.”

Noll, along with their co-host and fellow comedian Carly Ballerini, created the show in response to the tensions surrounding the presidential election. It was an exploration of the everyday struggle of feeling excluded from the dominant social norms. Yet underlying the intensity was the message that “there’s a lot of love to be had still.”

At times, the vulnerability was wrapped with humor. Stand-up comedian Peter Kim expressed his identity to his mom through what he thought were indicative actions: “I’m going to look at jewelry, bitch, I’m gay.” Ballerini addressed the terrifying overlord who adds his gay-hate to the already homophobic administration—Vice President Mike Pence. Her take on the situation? Pence is definitely gay: “He thinks sexuality is a choice—that means you’re choosing to be straight. Which means you’re gay!”

But other performers framed their content with a less-apparent cloak of sarcasm. In a poignant story about missed connections, comic essayist Erin Diamond provided a captivating take on her own life infused with a commentary about the blatant injustice in the prison system. Each time she returned to the mantra of her tale— “how did we get here?”—the phrase resonated with additional meaning.

Beyond animating the queer experience, the performers also discussed the intersections of marginalization. A frustrated Kim hates being a token: “I’m the only gaysian around!” But, in keeping with the unique audience-performer dynamic, Kim was not alone. To his surprise, an audience member articulated his identity as a gay Korean man—the first time it’s happened before, Kim admits.

Comedian Melody Kamali framed her set around how her identities both alienate and anchor her to points of relation. She spoke of her frustrations with the “No-Shave November” traditions in her male-dominated workspace.  “I feel like I should be let in the boys’ club because I’m Middle Eastern,” she said. “I can grow a beard, no problem!”

Not only did the show offer space for the performers to express themselves, but it also hoped its audience members could find the strength to come out in their own way. In our conversation before the show, Noll described hearing another comic discuss their gender non-conformity onstage, an experience that helped them come out as genderqueer. “I was like, ‘Oh, you can do that?’” they said. “I was so scared the first time but now it’s totally comfortable.”

Performers did not seem to shy away from exuberant personal expression. Perhaps it was their unabashedly exuberant personalities, movements, and dress that lit up the night. Drag queen Kimothy danced in her sequined top and thigh-length denim high-heeled boots as she lip-synched to “Aaron’s Party (Come Get It)” by Aaron Carter. Her sass was matched by the swagger of comic Cody Melcher, who sauntered around the stage in his shiny vest, colorful red jacket, and fine leather loafers, not to mention the glittery hand-held fan that he flashed mid-performance. As Melcher explored his struggles with mental health, showcasing both powerful wit and intimate vulnerability, his clothes helped him balance his set. “If you guys start getting sad, just look at the jacket,” he advised.

With a successful display of energy and communal sharing, Noll and Ballerini have pitched camp in an exciting new space where Hyde Park can interact with the Chicago queer community at large. The hosts have planned the next show for May 19, with hopes to make it a monthly event.  They call on queer folks everywhere—“and hip straight people too”—to come out.