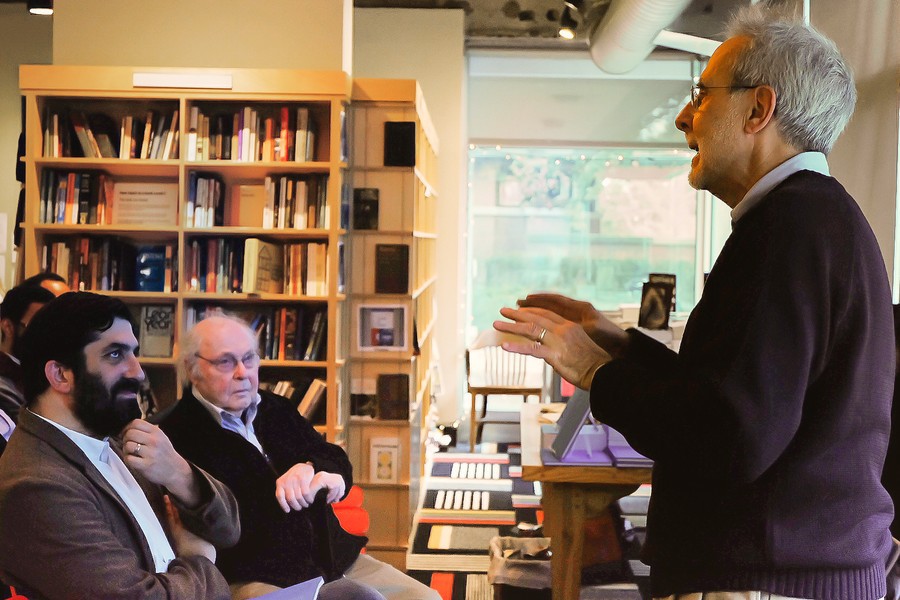 Jack Cella, who managed the Co-Op for 43 years, addresses the crowd at an October meeting.

Last Thursday, the Seminary Co-Op’s board of directors held a town hall meeting, open to both members and shareholders, to discuss the current standing of the bookstore.

Last June, the Co-Op introduced the Customer Loyalty program so that Co-Op members and shareholders can be distinguished from each other. Before the program, becoming a shareholder (which requires a minimum purchase of three $10 stocks) was synonymous with being a member. Now, membership is separate from stock purchases, incurring no cost to those uninterested in governance. Both members and shareholders have a 10 percent monthly rebate perk at the Co-Op, but only shareholders can cast votes for Co-Op policies.

All past shareholders have until the end of April to respond to Deutsch’s email before being considered a charter member. If a shareholder responds after April, their membership can be switched to active.

According to Deutsch, sales have been improving for the bookstore. The Co-Op is recovering from last year’s deficit but could also benefit from a structural change, he said. Deutsch commented that in one sense, the Co-Op never felt like a co-op, nor has it operated effectively as one. Later this year, shareholders will have an opportunity to discuss new forms for the Co-Op to take, including a proposal to become a nonprofit organization.

“We’ve been this idea of a co-op where people can feel good about joining a co-op, but there’s no responsibility to it,” Deutsch said. “That’s not what a co-op is. A co-op is something that requires work from all the people that are involved…. We need to get there.”

The modest level of member involvement is the result of a lack of communication between the board and members, Deutsch said. The Co-Op board has not asked its members to become actively involved in the past.

This fault was reflected at the town hall meeting, during which issues of communication arose multiple times over the course of the Q&A. Complaints regarding membership status, the strained relationship between the Co-Op board and members, and the Co-Op leadership were also voiced by attendees.

In an interview with The Maroon, Deutsch noted that he received e-mails after the meeting from members interested in helping or becoming involved in governance. Overall, the town hall meeting encouraged members to question how they could be more helpful in the future, he said.

“You can still be a member, not a shareholder, and act as an advocate on behalf of the store,” Deutsch said. “[C]are about this place, shop here, have this be your only bookstore you support or your main bookstore that you support. The only real difference [for shareholders] is that they’re engaged in the governance proper, and that has been I think really eye-opening for a lot of people to realize that that’s what we need.”

The next shareholder meeting is scheduled for Monday, December 4, at the Co-Op, where the proposal for becoming a nonprofit will be discussed. Although he has no strong opinions on the matter, Deutsch is enthusiastic about opening a dialogue. Shareholder voting for the transition will ideally happen next spring, Deutsch said.

The next town hall meeting is scheduled for Saturday, May 20, at 1 p.m.

This article was updated to more accurately reflect the difference between members and shareholders.