The Maroons split their doubleheader against North Central this weekend in two hotly contested games before dropping both games against Hope. 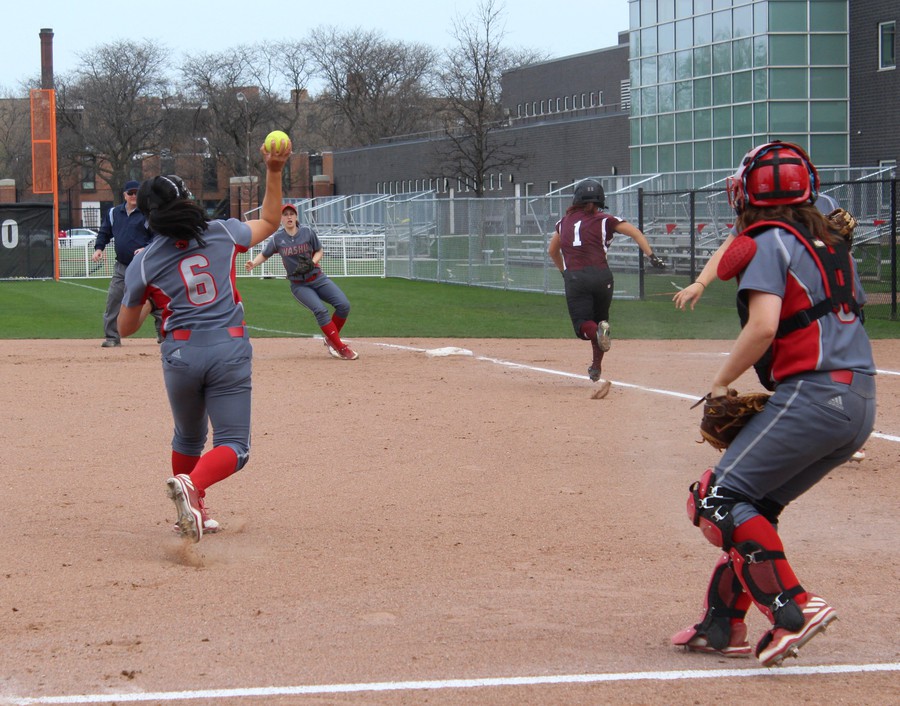 Serena Moss makes her way to first during the team's April 9 win against Wash U.

For the University of Chicago’s softball team, this past weekend was one of tight competition. On Saturday, April 15, the team traveled to Naperville, IL, for a doubleheader against North Central.

The Maroons got off to a rocky start in their first game, but managed to rally toward the end. At the end of the first inning, the Cardinals were leading with a 2–0 score. The South Siders managed to come back during the third inning, scoring a total of five runs and pushing ahead of their opponents. Each team would score one more run by the end of the game, rounding out the score at 6–3 in favor of the Maroons.

The second game of the day was a much closer contest. At the end of the seventh inning, the two teams were tied 3–3, putting the game into extra innings. The Maroons did not manage to score during the eighth inning, while the Cardinals were able to come away with a single run, resulting in a 4–3 loss for the Maroons.

These results have brought the Maroons’ overall season record up to 27–10.

Having achieved both a victory and a loss, the Maroons’ feelings toward the weekend seem to be mixed.

“North Central was a tough split because we were right there to sweep,” fourth-year designated player Anna Woolery said. “I’m proud of how we fought. The middle infield and offense looked especially good our first game. We, however, let up a bit and failed to finish the second game.”

In the coming week, the Maroons will face off against three other opponents: Hope, Aurora, and Case. On Monday, April 17, the Maroons traveled to Holland, MI, for their matchup against Hope. Their next competition will be on April 20 against Aurora.

“As we approach Aurora on Thursday, I’m hopeful that we’ve learned from our mistakes and will play to our potential, which is sharp defense, strong offense and precise base running,” Woolery said. “Given our two opponents in region, this is a significant week for us.”

The matchup against Aurora will more than likely turn out to be a close one. In last year’s doubleheader against the Spartans, the Maroons achieved a split result, winning the first game with a 6–3 victory and finishing out the day with a close 5–4 loss.

In addition, the common opponents that the two teams have shared thus far this season seem to indicate that the teams will go into the game fairly evenly matched, with perhaps a slight lean in favor of the Maroons.

The Maroons achieved a win against Benedictine back in March, while Aurora suffered both a win and a loss in a doubleheader against the Eagles earlier this month.

Both teams have also gone up against Wheaton in doubleheaders, which resulted in a split result for the Spartans and a pair of wins for the Maroons.