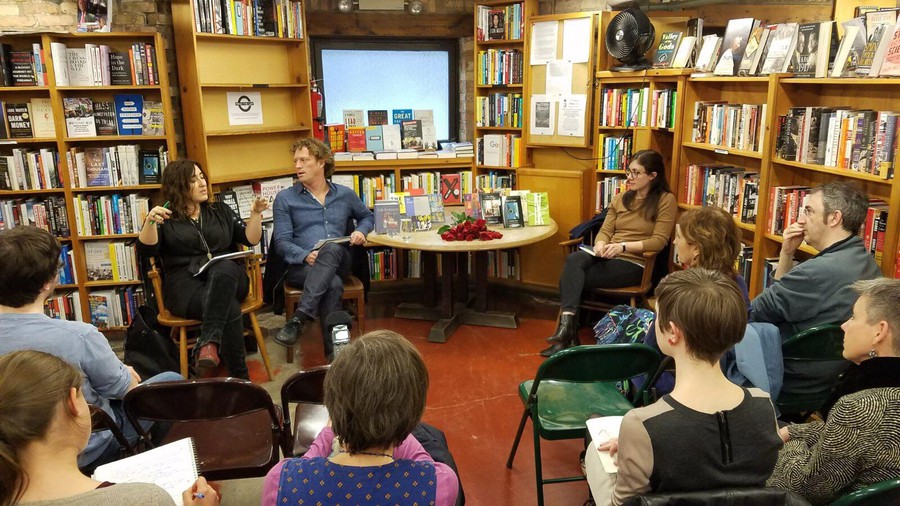 In Catalan, “I love you” translates into a red rose and books. April 23 is Saint Jordi’s Day, a popular Catalan holiday that celebrates love and literature. It is based on the story of Saint Jordi, a knight who killed a dragon, saved a princess, and then gave her a rose grown from the dragon’s blood.

On Wednesday night, a company of three translators and their audience gathered in the 57th Street Books Seminary Co-Op to fight for the possibility of a “Salvation through Translation.” The event was part of a three-day collaboration to bring San Jordi to Hyde Park between UChicago’s Joan Coromines Visiting Chair of Catalan Studies and the Seminary Co-Op.

Amaia Gabantxo and Jason Grunebaum, the featured translators, translate Basque and Hindi, respectively. Along with panel moderator Denise Kripper, they have no knights’ armor—only swords of words to defend languages against the monster Silence and its jaws of Invisibility.

Even though Hindi is the second most spoken language in the world and Basque is one of the oldest language in Europe, they are never as widely talked about as they are when translated into English.

“Translation gives Basque a presence in English and in America,” said Gabantxo. “[It] can then become a subject of study.”

Like roses, a language and the culture of those who speak it need attention and care to survive. Translation can be the fertile ground that allows a language to bloom and thrive by sowing wider readership. It is a way for an American audience to access remote realities and understand social phenomena from the inside, such as the caste system in India or the environment of a corrupted university in Basque.

“It allows a cultural recognition of the author’s talent and work,” added Grunebaum.

And yet, translated works represent only 3 percent of the books published yearly in the U.S., partly due to a lack of translators and the unwillingness of publishing houses to invest in, for instance, an English translation of a 16th-century Basque mystic book.

Yet Gabantxo and Grunebaum stress that such literary works are essential for their exploration of universal concerns. The Basque novel *Blade of Light*, for example, imagines a fascist regime based in New York whose biggest enemies are Hollywood and Charlie Chaplin.

“I decide to translate a book when I think it would be a crime to leave it untranslated,” Grunebaum agreed.

Such moments show that translation is much more than just sliding from one language to another. It is a political act: Translators are activists. A translator is a figure of justice, a Robin Hood of books.

Along with their working on a text, they create institutions, literary prizes, and journals to raise awareness. And, as Gabantxo and Grubeman explained, they make visible the political engagement of Indian or Basque authors who chose to write in their own languages, and not in the colonizer’s language—French, Spanish, or English.

“[It is important to leave] footprints or breadcrumbs to show the open backdoor,” Grubeman said, pointing to how the aim of translation is not to erase the original language. Gabantxo similarly reinforced the importance to retain the “flavor” of the author’s voice.

That brings us to the difficulties of translation: finding a balance between what to translate and what to keep untouched. One of the main issues with translating Basque is the polyglot nature of its culture. The original text contains elements of Basque, Spanish, and French. Gabantxo, who refuses to translate everything, is left with the question of what to do with the references that an English reader cannot grasp.

The two speakers engaged in a debate with the audience on the question of the use, or exclusion, of footnotes in a translated text. Whereas some readers complained about terms left unexplained, the translators defended their choice to gloss over the cultural references instead of using footnotes.

“We have to find a balance between explaining and pre-chewing,” Grubeman argued. “The translation should work both for American and South Asian readers, [who are] much more familiar with the cultural context.”

But everyone agreed that nothing is lost in translation. Instead of creating a pale copy of an original—and better—work, translation creates two originals, two voices committed together to fight the menacing dragon of Silence.