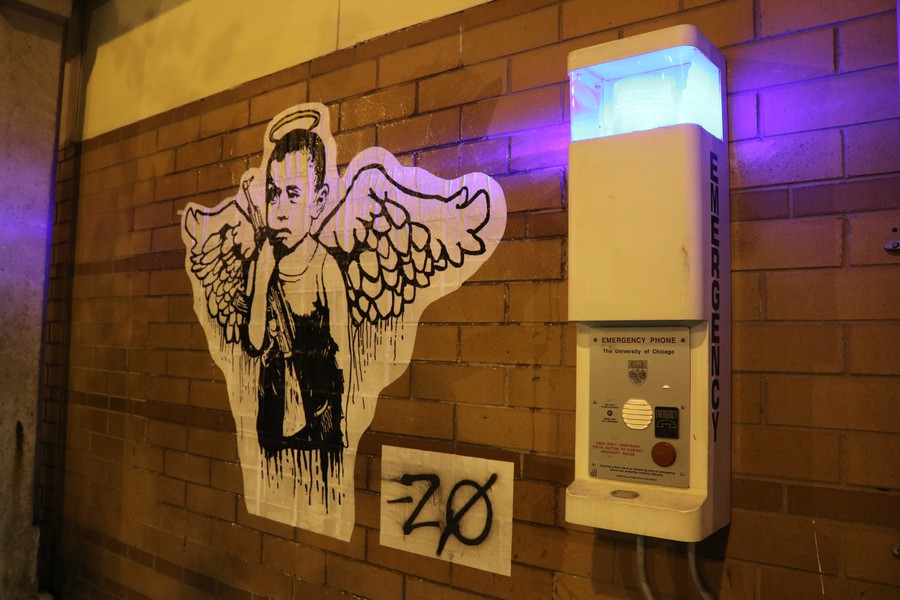 Though they may not be aware of it, most students at the University of Chicago are familiar with the work of ZØ, the University’s most prominent student street artist. Pasting depictions ranging from anti-Nazi spray to University of Chicago Police Department (UCPD) security guards onto walls around Hyde Park, the work of this anonymous undergraduate has become embedded in the fabric of the school. The Maroon recently interviewed them on the condition of anonymity.

When describing how they became interested in street art, ZØ painted it as an alternative to “following the money trail” after they were prevented by their parents from attending art school. “Stupid nine-to-five job…. I didn’t see that as my future. This is me rebelling against that. It’s kind of like an exploration for me.”

ZØ remains anonymous on principle, saying, “I want my art to be seen from an unbiased perspective…I didn’t want the creator to be part of the art.” The artist clarified that they by no means consider their work as solely aesthetic and politically impotent. “I believe that art is from the artist’s opinion, what they believe in…. If you choose a color, you like that color.”

Recently, ZØ has most frequently railed against Nazism in its modern form. Several times earlier this year, a neo-Nazi group, one of whose members was recently arrested, pasted racist and anti-Semitic posters to buildings around campus. The artist explained their desire to fight back against these messages in the way they knew best: street art.

“I also wanted the Nazi group to know there are people fighting against them. Stay off my turf. This is where I vandalize, not you.”

As a result, ZØ created two new pieces, a can of anti- “anti-Progressivism” spray, and a crowned rat, and searched campus for Nazi posters. “Instead of ripping them off we re-pasted over it. It prevents them from being seen and also sends a message: stay off my campus.”

ZØ also has worked on other political issues. After the election, they said they “just want to provide support for protest groups. So I made some anti-Trump posters.”

At first, these focused on opposition to Trump, with captions like “Rebel against the tyrant,” but then ZØ decided to pursue a different theme.

“My thought was instead of spreading hate against someone I should turn to the brighter side of things, so I started focusing on power to the people, or hope.” The result was a series of “Power to the People” posters.

One of ZØ’s most controversial pieces has been a pasting of a campus security guard with a speech bubble saying “$13/hr.”

Pay for campus security has been a controversial topic in the past, and when the pasting went up, some students complained it was a violation of privacy to post workers’ hourly wages publically. ZØ responded by describing their view of the working conditions of campus security guards during a service event providing them with care packages.

“Even though it is rude, it needs to be known…. If I respond to [the] criticisms of everyone, I’m making your art.”