The second installment of the Maroon's artist feature showcases the work of fourth-years Breanne Johnson and Alice Xiao.

I make a lot of paintings—some woodworking, some sculpture. I recently finished an installation piece and want to go more in that direction. But I’ve been painting my whole life, mostly oil painting. I like to work with whatever is around me and incorporate that into my paintings. I like to paint realistic stuff and then make it weird.

My work has changed a lot since coming to UChicago. It’s a really conceptual, theoretical place. Before I came here, my work was really aesthetic. I was making things because I liked the photographs they were based on. When I came here, I started working at the Renaissance Society and thinking about work with deeper meaning. Part of my job there is to go through archival boxes, so I do a lot of reading about cool artists—the conceptual work that they’re making and the responses of really smart people like Hamza Walker.

"There’s this dichotomy that seems inescapable in the way that we talk about race in Chicago. Through my work, I’m trying to talk about people like myself who see race as far more ambiguous."

My first two years here, I didn’t really make art about racial or identity politics, but then I picked up a political science major because I care about race. In studying and learning about that, I brought it to my [art] major as well. So they’re meshing.

Right now, I’m working a lot with identity, race, and racial politics. I’m trying to work with my own family tree without making self-referential art. There’s this dichotomy that seems inescapable in the way that we talk about race in Chicago. Through my work, I’m trying to talk about people like myself who see race as far more ambiguous. My background complicates the race dynamic in Chicago, where it’s seen as a black-or-white binary. 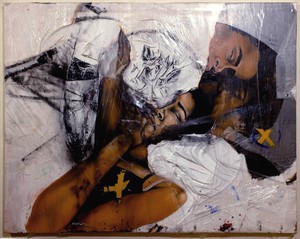 This multimedia painting on canvas incorporates a thin layer of plastic wrap.

On my mom’s side, our history is all slaves and slave owners. We are all different colors, but we all have the same genes. My cousin Ian looks really racially ambiguous and is treated a certain way because of that, whereas his sister has blonde hair and would never be perceived as being mixed race. My sister and I also look white. We have a mixture of genes within us, but it’s just the phenotypic traits that show up that determine who you are in society and what rights you have.

Pipe-dream: I want to be an artist. Conceptual art is really hard, and the thought of diving into that means you have to put everything into it. You can’t really do conceptual art on the side.

I was thinking about how those terms could be read in a racialized way. So I took that and built Whitey’s house—but if Whitey were Asian. When we hear “white,” we think Caucasian, so that’s one disconnect, reading this as Asian. I built a Japanese shoji house in an American tradition with domestic materials—American wood, paper from Whole Foods—to create this “Asian-esque” house that has a Chinese lantern from Amazon Prime. Then I had this house call itself a brick house and played “Built Like a Brick House” by the Commodores inside—but muffled, as if you were actually listening to it through a brick house. 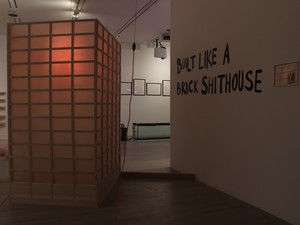 But it fails as a brick house. It also fails as an Asian shoji house. It’s not Blacky’s house. It’s not Whitey’s house either. The song by the Commodores is top-of-the-charts number five American hits about a woman who’s built like a brick shit house. So it’s all these misreadings of the thing with the hope that it exists in this in between space—basically othering the object that is performing but failing at whatever it is trying to be. 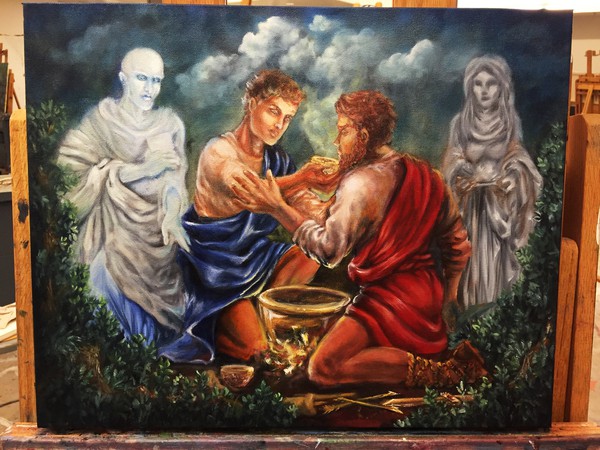 This painting was featured in FOTA's Springfest last year. It depicts Esau trading his lineage for food.

Some of the works I’ve done in high school and college combine well-known classical tales from different countries with classical painting techniques. In high school, I was really inspired by one of my teachers who did a lot of ink drawings, so a lot of my portfolio is black-and-white ink.I do mostly 2D art—painting, ink, some sketching. It’s something I’ve done since I was little that my teachers have always encouraged. I don’t have any formal training, so I try my best to learn on my own. Art was something that made me feel like myself. As I got older, I became interested in writing as well, so I try to combine a lot of fairy tales and themes from stories that we’re all familiar with.

When I took AP Studio Art, my concentration was fairy tales: Snow White, Little Red Riding Hood, The Little Mermaid. A lot of it involved the metaphor of making a trade. The Little Mermaid trades her greatest asset—her voice—to catch the eye of someone she likes. It’s a materialistic gain. There was another one that involved the Mad Hatter. Back in the day, hatters were mad because there was mercury in the hats that they made. It was a trade in his own way: He traded his sanity for his passion.

What draws me to fairy tales is that it’s not always so clear what’s good and what’s evil in a story. In drawing or re-drawing a scene, you can portray it in a way that speaks to the viewer or asks questions. Say Snow White’s taking the apple from the evil witch—is there a parallel there to Eve taking the apple from the serpent? Is Snow White pure and innocent, or is she being tempted? If the viewer can see both characters at the same time, they make the connection as well. 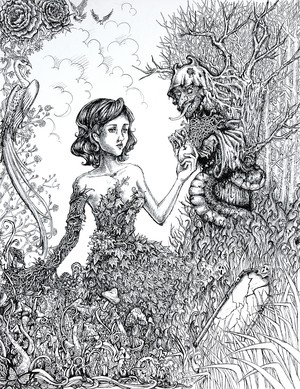 'Concentration 7,' a depiction of Snow White, is part of Xiao's ink series.

People have asked me why I didn’t pursue art as a career, and I’d say I like to keep it as a passion—as a hobby. The kind of art I like to do is not in demand in today’s market. Art as a career these days involves designing and a lot of digital, which I’ve also dabbled in. I think econ is interesting and useful in life, and I want to see what it’s like to work in corporate life. Once I work in finance for a couple years, maybe I’ll go back to doing more art.

"What draws me to fairy tales is that it’s not always so clear what’s good and what’s evil in a story. In drawing or re-drawing a scene, you can portray it in a way that speaks to the viewer or asks questions."

One of the things I always wanted to do was to find a style or technique that is special to me. A lot of other artists my age already have found that. Sometimes it’s a way they perceive the world and that is shown through every piece of art. For me, there’s not really a connecting theme, and that’s one of the challenges I’m trying to overcome. But I think you have to wait for good things to happen.