By Ivan Ost   and Max Miller 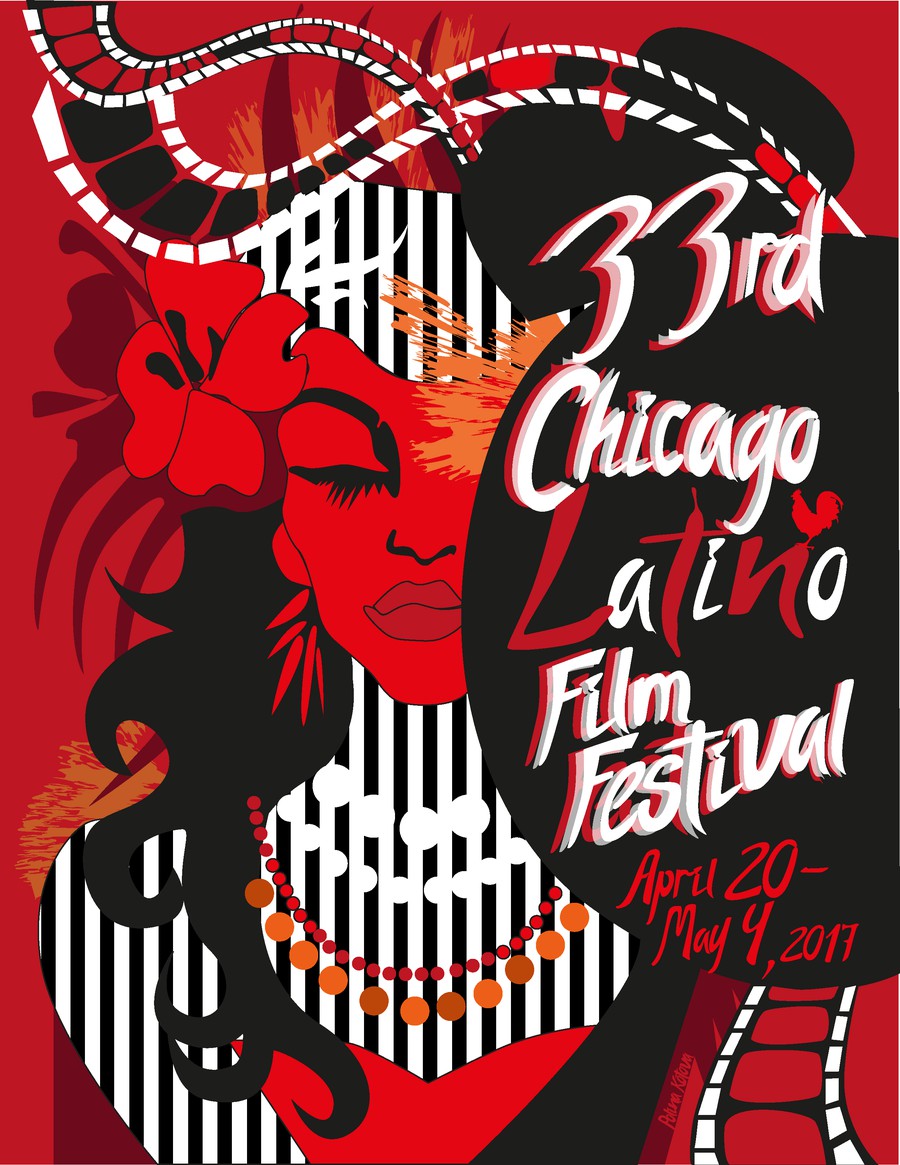 A finalist in a poster submission contest for the 33rd Chicago Latino Film Festival.

From its opening shot, which brings the viewer to the ground from far above a swampy inlet, Between Land and Sea establishes its steely hold on our sense of movement. Viewers are captured and contained by the film’s many intense close-up shots, akin to how the protagonist Alberto (Manolo Cruz) is trapped in his dystrophic, decayed body. The gripping tension in the film comes from the way that Alberto, struggling and writhing ineffectively in his bed, cannot accomplish even the simplest tasks without help from his mother, Rosa (Vicky Hernández), or his would-be lover, Giselle (Viviana Serna). Alberto’s world is so small and contained, from decades spent laying in his one-room stilt shack with his mother, that his main goal in life is simply to see the ocean.

The world of Between Land and Sea is both destitute and beautiful. Sunlight pours onto Alberto’s face and ramshackle room, creating an angelic setting that contrasts his own hellish circumstances. Cruz, who both starred in and directed the film, uses bold and powerful colors to highlight the striking beauty found in even the darkest of places. He guides the viewer with extreme close-up shots through the minutiae of Alberto’s constant struggle to live, which renders us as helpless and drained as another of Alberto’s observers, his mother. Cruz’s style is pensive and relaxed; the film meanders through tense and heartbreaking scenes with Alberto’s constrained pace. Deft use of cinematic composition shows character status throughout the film, such as when Giselle towers over Alberto as she watches him sleep, or when Alberto and Rosa are framed in an over-the-shoulder shot crying on each other from a shared feeling of cosmic injustice.

Between Land and Sea gracefully explores sacrifice, desire, and helplessness. Giselle, Alberto’s young, beautiful neighbor who dotes on him despite his handicap, goes to extraordinary lengths to help him. However, Rosa forbids the girl from seeing Alberto further, afraid that the tragic impossibility of the couple’s love will be torturous and soul-rending to her son. Alberto’s feverish desire to be free of his physical burden and embrace a love with Giselle is reflected in a number of dream-like dérives, wherein Alberto is powerfully swimming in a cerulean ocean or is passionately kissing Giselle. These dream sequences are washed out by the intensely bright light of fantasy, which makes the return to Alberto’s darker reality deeply upsetting for both Alberto and the viewer. Cruz pulls at our heartstrings and leaves us awestruck by showing the complete devotion and care that Alberto’s mother gives her son, knowing that she can never give enough of herself to heal him.

The film, more than anything, espouses the value of hope. Manolo Cruz emblematizes an aspect of Latinidad, the constant struggle for a better life in the face of adverse circumstances, and the beauty and kindness to be found therein. There is a telling afterword to the film: “it only takes one small crack to let the Light come through and change our lives.” For viewers with an interest in a contemplative, beautiful story of hope and tragedy, Between Land and Sea will surely prove gratifying.

Watching Salsipuedes (Leave if You Can), I was most impressed by the camerawork. Not the script, the acting, the Panamanian setting that elsewhere, in less original hands, would be pumped-up to a cliché Las Vegas neon—but the way it looked to see Andres Pimienta (played as a boy by Samir Flores, as a man by Elmis Castillo) grow up, move out, and come back.

The visuals are so interesting because they are unexpected. Salsipuedes takes place in a world that is almost dull, blued-out—but these muted shots are overflowing with potential brilliance: color lurking in a colonial home’s lurid maroon glow, a woman’s indigo tiger-print leggings. These colors, so clearly overwhelming in person, are washed clean. Odder still, the film slinks along with the camera, stalking the characters like hunters. We spy the protagonist at his grandfather’s funeral from behind a gravestone and observe as he sees, for the first time since he’s returned to Panama from the U.S., the face of his estranged father. In a flashback, we crawl along beside Andres and his childhood friend Nati (played by Chiara Lorena Díaz) as they spy on Andres’s father, sneaking behind pillars and through billowing furls of white laundry.

Why hide the colors, why slink alongside the plot?  The answer emerges as we watch Andres return home to a country he hasn’t known for decades. His mother disapproves of his imprisoned father but loves him anyway, and his father immediately uses him in a ploy to escape prison. The same violence and divisions that plagued his upbringing persist. Seeing his internal division, the pallor cast over the brilliance of Panama begins to feel right. At its heart, Salsipuedes knows that Andres is torn between love for his family and home country, and his baggage having grown up in a home divided along a rift his father left. And it knows that even a home as challenging as Andres’s can have an irresistible draw.

Salsipuedes is being shown as part of the Latino Film Festival; its questions of guilt for leaving home are perhaps an effort to address questions of obligation to honor one’s heritage, even in a world that might not seem friendly to such tradition. After his father escapes and he returns home to have a quiet dinner with his mother, Andres asks, “What does this mean for my destiny?” How can he address the pain of leaving a family that could not support him and kept breaking up? Is his destiny determined by the sins of his parents? How much of what he must do is already determined by others?

The film knows that these are questions without clear answers and does not attempt to give any. It concludes on an ambiguous note, in that same muted, numbed way. Andres saves his father’s life by shooting a mugger and gets to hear his father say: “I’m proud of you.” Underneath the grays and blues of the shot, the glow of their connection is obvious. But then Andres must leave and flee the violence of the scene. Their joy cannot be simple, after all. We watch, their deeply personal moment, yet the cool colors belie the content of the shot. But then they begin to make sense when Andres’s forced exit corrupts the goodness of the moment. Salsipuedes knows: In questions of identity, of obligation, of duty and right, the answer is rarely simple.

Stay tuned for The Maroon's ongoing coverage of the Chicago Latin Film Festival, which runs through May 4.

Scenes from Mexican History Come Together in "La Habitación"