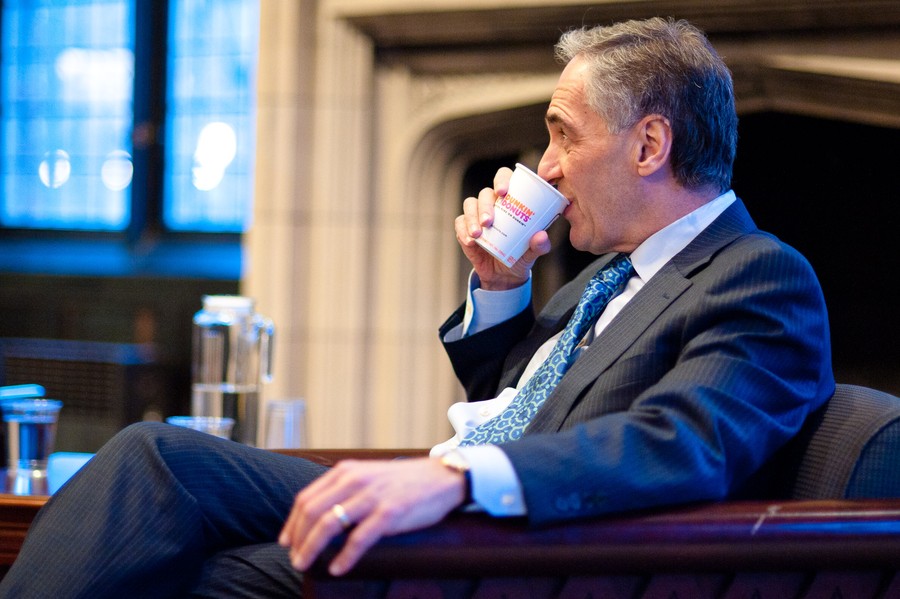 For an hour last Thursday afternoon, President Robert J. Zimmer took questions from The Maroon. He was at his usual seat at the center of a conference table in Levi Hall, back facing the quad, with the dean of students and a University spokesperson accompanying him for the interview.

On lobbying since the election

Although Zimmer said that the University is not necessarily lobbying more under the current administration than it did previously, he acknowledged that there’s been a shift in the issues that the school is prioritizing.

“The emphases of the issues may shift as different administrations come and go, but there’s always a large amount of things we do. The most active place where we’ve had a type of shift is obviously in immigration.”

The University filed legal briefs opposing both executive orders to ban individuals from Muslim-majority countries from entering the United States, and the University president and provost wrote a public letter to Trump stating their opposition.

“The decision was based on the issue that this was a direct difficulty for a number of our students and a number of our post-docs and their capacity to do their work,” Zimmer said. He did not rule out the possibility of similar condemnations of presidential action in the future, however, he preferred not to speculate on what could happen.

The major cuts to science in the President’s budget proposal are concerning to Zimmer, but he stressed that it’s Congress that approves the budget, not the President.

The big college news story right now is the University of California, Berkeley’s decision to postpone an event with conservative commentator Ann Coulter over safety concerns. University of Chicago administration has made it clear over recent months that campus groups can invite anyone to speak at the University, no matter how unpopular the speaker’s views may be. The Maroon asked if the University is capable of safely facilitating speaker events with anyone, even individuals prone to violent responses.

Zimmer noted that the University of Chicago was the first school to host Charlie Hebdo writer Zineb El Rhazoui after the attack in 2015 that killed 12. There was a very high security presence because she was being threatened, he said, but the event went on as planned.

“Any institution’s capacity is finite. I’m not saying anybody has infinite capacity because we don’t. But we’re certainly committed to doing what we can.”

He affirmed his belief that it is vital that members of the University community be allowed to invite anyone they want to come speak.

“It’s important to be striving to have a civil society, but the idea that the best way of doing that is to allow an environment where you have some group, some committee, who sits in judgement upon other people’s desire to hear somebody, is very problematic.”

Zimmer said that the “structure” of allowing groups to invite anyone has “difficulties,” but he believes that there is no alternative. He said that a college cannot prevent someone from speaking and then pretend that particular action does not have broader implications on the so-called structure.

“The minute you set up something where you think you’ve identified all the bad people, you may be surprised what other people think. And they think that the people you like are the bad people.”

On the Obama presidential library

Community organizers have been pushing for the Obama Foundation, the City, and the University to sign three written agreements committing to benefitting the community with regard to things like job creation and affordable housing. Zimmer said that the University has been largely hands-off with the library, and that it has not engaged with this issue of a community benefits agreement (CBA)—that would be up to the Obama Foundation.

“We’ve been doing a lot with South Side communities, and we expect that the Obama Library will also, but exactly what form that takes is going to be up to them.”

The Foundation opposes a CBA.

“I think we’ll see a lot of development south of the Midway but north of 61st Street,” Zimmer said. The University was at one point supposed to break ground on a new 11-story conference center at 60th and Woodlawn last year, but construction has yet to begin. Zimmer said it’s still in progress, and that it’s “remarkable” how long it takes to complete large construction projects.

Asked about further construction, Zimmer said they’ve been talking about the possibility of another residence hall, as it’s the University’s goal to get a higher percentage of its students in College Housing.

On fraternities and sororities

The Maroon asked about the University’s relationship—or its lack thereof relative to other schools—with Greek organizations on campus. Zimmer said that he spends little time thinking about student life issues like these. He said that he’s not involved with “housing kinds of issues” aside from the construction of new dorms and the visits he makes to residence halls to talk to students.

Dean of Students Michele Rasmussen answered a question about Harvard’s attempt to curtail single-gender social groups unaffiliated with the university. Harvard will place various sanctions on members of these organizations because they are “rife with power imbalances” and “propagate exclusionary values.”

“We’re not Harvard,” she said. “It doesn’t seem very UChicago-esque to tell students who they can and cannot fraternize with—excuse the word—but that’s just my point of view. It’s not something we have talked about at any kind of length.”

The Obama administration’s Office for Civil Rights, part of the Department of Education, issued a Dear Colleague letter in 2011 requiring that all colleges receiving federal funds use the “preponderance of evidence” standard in disciplinary cases regarding sexual assault. The Maroon asked if the University would revert to a higher burden of proof if the government rescinded this guidance.

Zimmer did not want to speculate and said he had not thought about it. Rasmussen said, “It’s the standard we’ve been using now for several years. I don’t really see any compelling reason to not use it.”

On the Neo-Nazi posters

A man was arrested last month by University police for affixing racist and anti-Semitic posters to campus buildings with an adhesive glue. When asked if this was somehow inconsistent with Zimmer’s statement that it would be “fine” for white nationalist Richard Spencer to speak if he was invited, Rasmussen said the removal of the posters was not—at least for the most part—due to their content. The posters were removed because of the adhesive glue, although she did note that the University pushed for the state’s attorney to charge him with committing a hate crime.

On discipline for disruptive conduct

The faculty senate will vote in May on a measure that would create a new disciplinary system to handle disruptive behavior like speaker silencing and sit-ins. The Maroon reported that the administration is giving the senate an ultimatum: if the vote were to fail, it would revive a disciplinary system for this kind of behavior that has not been used since 1974.

Zimmer would only indirectly answer a request to confirm this reporting. “Well, the ’70s system exists so the question is ‘what is a better structure?’” he said, referring to the faculty senate vote on the proposed new system. Asked if this comment meant he was confirming that the administration would revive the 1970’s system, he continued to leave it open.

“I’m just saying that it exists, so I’m not saying anything about any particular cases. I’m just saying it exists. The question on the floor [of the senate] now is, ‘is that better? Or is what [the] committee has recommended better?’” he said. “Here, the Council has a very clear responsibility, and they need to exercise it one way or the other after discussion debate. And one way or the other they will.”

On his leadership style and his priorities

Zimmer is not hesitant to say that he cannot answer a question when he simply has little knowledge of an issue The Maroon asked about. He often directs questions to other administrators whom he thinks are more capable to speak about that particular issue.

The Maroon asked if he thinks his lack of engagement with certain student life issues is a product of his leadership style, as other university presidents frequently make statements on issues of student life. He sees it as a matter of priorities.

“It’s been my experience that there’s a set of issues where one’s judgement and abilities in a particular position can add more value, and there are other places where maybe you’re not as experienced and other people are and they can do it better than you can,” he said. “You look at one president after another and different ones are going to prioritize different things in terms of which ones get their attention.”

Zimmer listed a number of “key things” he’s most engaged with.

“There’s a set of academic programs that I’ve been very engaged with and that I think are very important to expand and to see get to a place where they can flourish, and I include molecular engineering and a new shift in computer science in this way. We have a lot of work to do in the neuroscience area. I’ve spent a lot of time on our arts programs, and finding ways of increasing the accessibility to campus. We’ve had massive increases in financial aid, so these are both policy decisions and—a lot of these—are fundraising issues. So the fundraising is not really a separate thing but it’s connected to these priorities of student accessibility and financial support to building these academic programs. The medical center always takes a fair amount of time. This is a big part of the University—we own our own hospital. … I spend a lot of time dealing with issues of how it is we can improve relations with the community, so the South Side and the City in general. And I spend a fair amount of time on our global relationships. We had to recruit four new deans this year. … I have to get the right people in these jobs,” he said.