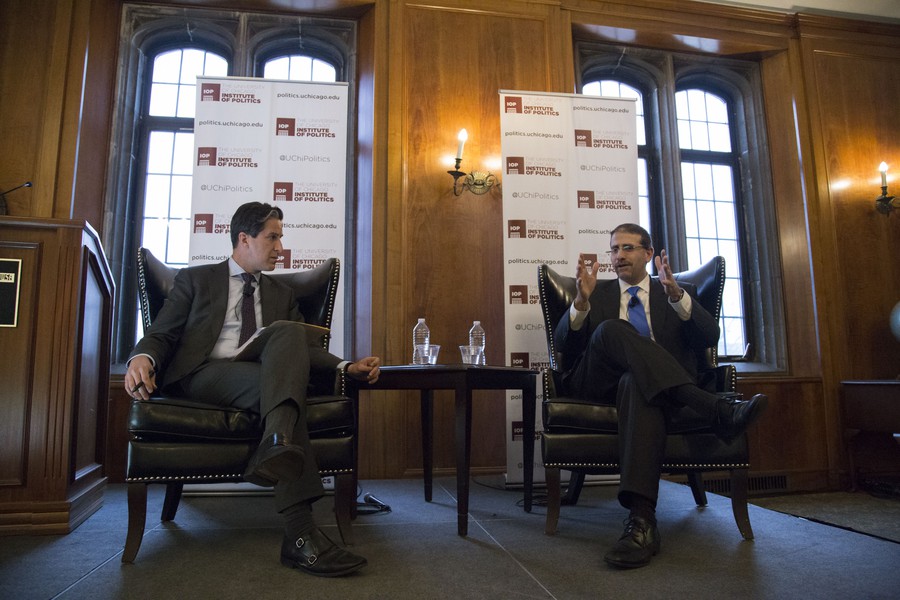 Former US Ambassador to Israel speaks about foreign policy at the IOP.

This story was updated to include a response by the IOP.

The former U.S. ambassador to Israel spoke about settlement negotiations, Iran, and President Donald Trump’s foreign policy at an Institute of Politics (IOP) event on Thursday.

During the discussion, Daniel Shapiro expressed concerns about past statements made by the Trump administration’s recently appointed ambassador to Israel, David Friedman, including an assertion that former President Obama is anti-Semitic. However, Shapiro said that, as an ambassador, Friedman’s personal views will not play a major role in developing foreign policy.

Shapiro disagrees with many of the Trump administration’s policies, but is more comfortable with their approach to relations with Israel. “I think they’ve been much more responsible and more reasonable, and at least closer to the mainstream of historic U.S. policy, including back during the Obama administration but also preceding ours, than in almost any other area I can think of,” Shapiro said.

Shapiro believes that the possibility of achieving a two-state solution in Israel, the stated goal of the Obama administration which Trump has said he does not necessarily support but has so far promoted in practice, is growing more difficult as a result of both Israeli settlement in the West Bank as well as incitement of violence against Israel by the Palestinian Authority. However, Shapiro does not believe that the goal is completely out of reach, and he invoked the 2005 Israeli withdrawal from Gaza as an indication that the current challenges to a two-state solution are not irreversible.

Shapiro also discussed his alarm at the Trump administration’s recent acceptance of the Assad regime’s continued power in Syria. He argued Trump’s outlook could be a step toward cooperation with the regime and its chief ally, Russia, that could jeopardize Israeli national security. The Assad government is supported by both Russia and the Iranian-backed militant organization Hezbollah, a group that Shapiro fears may gain increased leeway from Trump to put pressure on Israel, as a condition of Russian efforts to combat ISIS.

In a letter to a Maroon editor entitled “IOP must stop prioritizing the voices of bullies over their victims,” the UChicago branch of Students for Justice in Palestine (SJP) criticized the IOP for hosting Shapiro without presenting a contrasting position, and tied Shapiro to U.S. logistical support of Israeli policies in Gaza and the West Bank. SJP argues that the IOP should invite Palestinians affected by Israeli policies supported by the U.S. if it aims to adequately teach students about the topic.

“It is a mark of shame on the Institute of Politics that they prioritize the voices of the powerful and those that facilitate the bullies over the weak and oppressed struggling to secure their basic human rights,” the letter reads.

In an email to the Maroon, IOP Director of Communications Matthew Jaffe responded that Palestinian journalist Wajeh Abuzarefah had been a resident fellow at the IOP last year.