Ai Weiwei documents escapades of resistance against the growth of autocracy and surveillance. 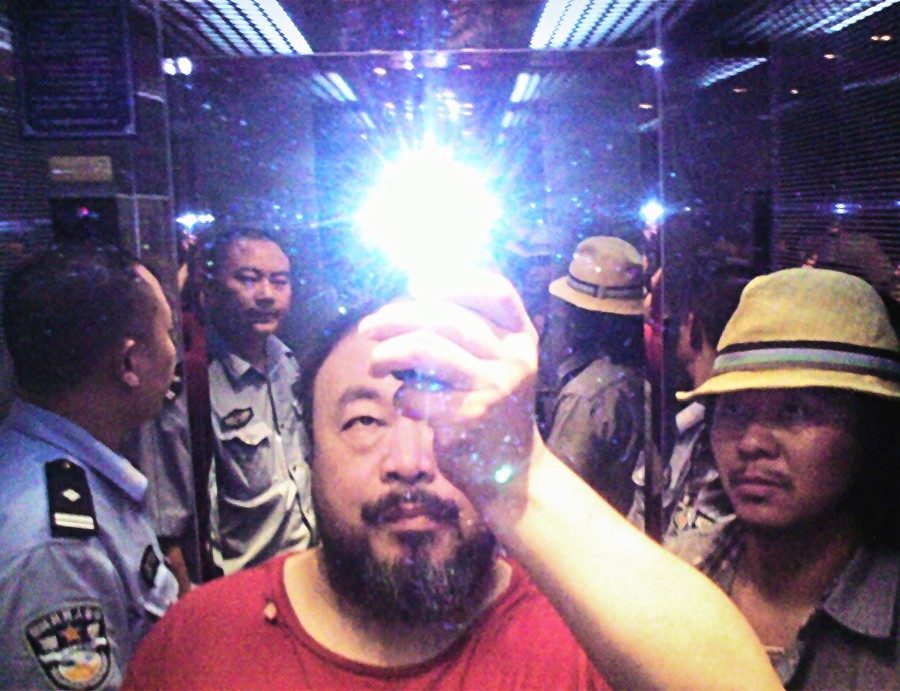 Courtesy of Museum of Contemporary Photography

On April 13, #AiWeiwei opened at the Museum of Contemporary Photography, showcasing the prolific work of Chinese-born artist and activist Ai Weiwei. The exhibit is free and open to the public, which fits into the artist’s discourse on greater civil liberties for all people. As we enter an unprecedented era of surveillance, social media, and widespread paranoia, the exhibit is a timely snapshot of a society negotiating security and citizens’ rights.

A major part of the exhibit focuses on Ai’s blurry phone camera pictures of the people sent by the Chinese government to secretly observe him. One’s first impression is that Ai is overly paranoid about his surroundings. Viewers who look more closely at the strange situations in his hasty, blurry photographs inevitably sink into a reality where he is watched (and sometimes violently detained) by the Chinese government. Such photos and encounters reveal the breadth of his surveillance, and the lengths to which the government will go to barricade his privacy.

One of Ai’s photo sequences shows two men and a woman seated near his restaurant table. All three are utterly absorbed in their phones. However, their strange behavior extends beyond their smartphone obsession, since they order nothing throughout the “dinner.” Their task for the night is evidently to monitor Ai’s words and actions. Other photos, like the ones that show a black car supposedly “following him,” or a man on his phone trying to move away from Ai and his camera, seem to be more questionable depictions of the secret police. By contrast, other photos clearly show that Ai’s suspicions are true. In one photo sequence, Ai confronts a leering bystander while on a walk with his son in the woods. Ai found that the man was a government agent who had been photographing and monitoring his actions.

Another sequence of photos, particularly blunt and frightening, show Ai’s discovery that his art studio had voice recording devices hidden in every power outlet, which were left undiscovered for years. If hundreds of undercover agents and police officers are tasked to follow an ordinary but popular artist, what might the government do against someone even more rebellious?

The exhibit captures the most profound parts of Ai’s art, which blurs the line between reality and the digital realm. There are pictures of jugs painted with the Coca-Cola logo, compilations of Ai’s supporters mimicking his poses on Instagram, and surveillance camera footage of his protests. One video details Ai’s high-profile online protest of his house arrest and mandatory surveillance. The artist set up a 24/7 live-streaming camera in his house to stream every second of his day online after he was put under house arrest for no reason. Ai cheekily told the government that he was “assisting them with their surveillance,” while it’s clear to his viewers that he was also preventing the government from inflicting unwatched violence. The stream remained functional for almost three days before being taken down by government agents, but achieved a peak viewership of more than 5 million people.

Ai’s photos are sometimes blurry and small, but create an overarching mosaic effect, an aggregate piece of art, when in concert with each other. One wall of the museum is dedicated to an actual mosaic of Ai’s photos of refugees, taken from his trips to places like Syria, Mexico, and Greece. More than 16,000 small photos document his travels, and trying to look at all of them at once is overwhelming. The assaulting wall of photos not only brings to mind the horrifying scale of the refugee crises of today, but also calls to our attention how we, as viewers, process tragic information.

The main emblem of the show, blown up to cover the entire back wall of the first atrium, is a selfie that Ai took while being detained by government officers. After agents had broken into his room, beaten him, and pushed him inside a mirror-walled elevator, Ai took a tongue-in-cheek picture of himself in the reflection with his unflinching oppressors. The picture tells a story of potentially unseen and unheard violence, and the importance and potency of social media and documentation. Ai’s exhibit shows us that tools used to record sound and video—and even selfies—can be powerfully employed to fight against injustice.

#AiWeiwei will run until July 2 at the Museum of Contemporary Photography.