I'm studying computational and applied mathematics and I do problem sets on the first floor of the Reg. 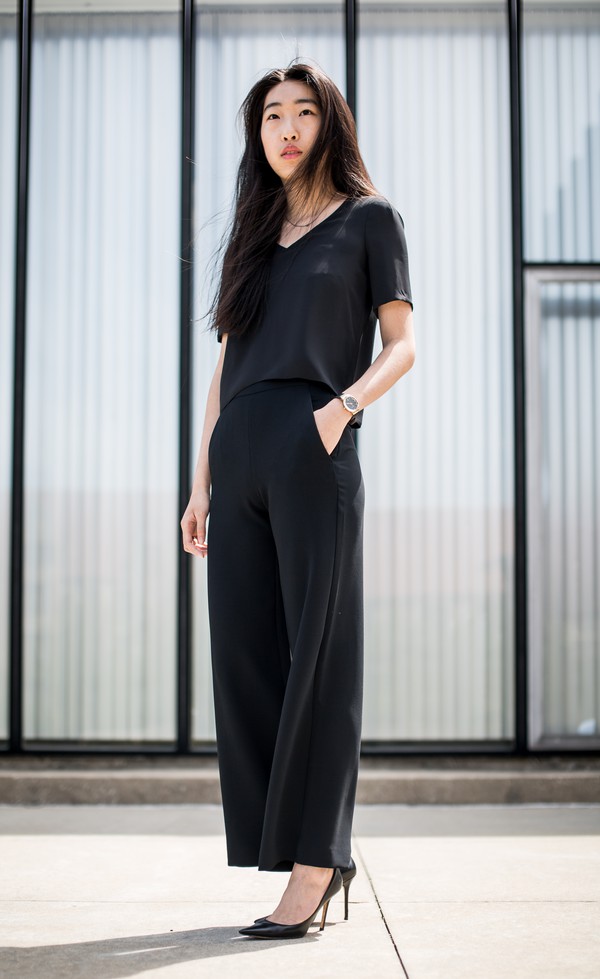 My day-to-day style is dependent on the weather. It defines what kind of shoes I’m going to wear that day, and I dress from the feet up. If it’s raining, I have a pair of black Chelsea boots, or a pair of rain boots. But that limits my choice of dresses or pants, because the cut of the boots doesn’t work with the cut of the clothing. I’m not going to wear my favorite heels if it’s raining! 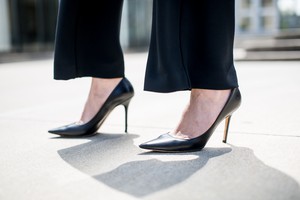 I love professional wear. I love men’s suits, especially when models like Cara Delevigne wear them. I love the clean lines of men’s suiting. Part of that look is because men’s bodies are naturally un-curvy. I’m not particularly curvy, so I think I can pull it off.

With women’s suits there’s less of a culture of tailoring, at least at an accessible level. Obviously, if you buy a Prada pantsuit you’re going to get it tailored. But men get their suits tailored, whether it’s cheap or expensive. Wearing suits right off the rack can be tricky for fit and you might not look as clean. And the jackets designed for women can be so out there, with weird sleeves or some other design—why can’t we just make men’s suits for women?

"There's nothing as not powerful as limping around with blisters on your feet..."

A corporate pump has to be comfortable. There’s nothing as not powerful as limping around with blisters on your feet, bleeding all over the place—that’s not cute. And you can’t stand tall. In regular clothes I slouch a lot (parents always nag me about that) but when I wear heels, I don’t slouch. It has to be tall, at least for me. 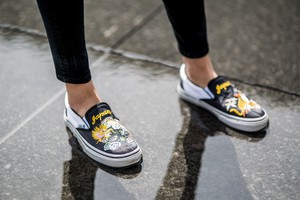 Slip-ons by Rollicking x Vans, a 2017 spring collaboration released in Taiwa and Japan.

As for the silhouette, I need something sleek that goes with the clean lines of the rest of my workwear. I won’t wear something clunky. With a lot of lower-quality heels, the leather is either too thick or poorly formed—they take a long time to break in and don’t fit well, which isn’t comfortable. I did a lot of research on them beforehand because they were such an investment piece. Jimmy Choos are known for being comfortable. So I’m happy with them because they last through the day.

I also recognize that there’s a tricky discourse around subscribing so fully to the power of male suiting. On the one hand, claiming that menswear is better than womenswear in projecting power only serves to perpetuate the perceived difference. But I’m also appropriating this form of dress for a male body on my own—my pants are a little too cropped and a little too tight, and I always wear my suits with heels. And thank God for my company’s business casual policy, because my pants would not fly otherwise.

I don’t really have style—I just know what I like. And if I don’t like it, I won’t wear it.  —RENEE 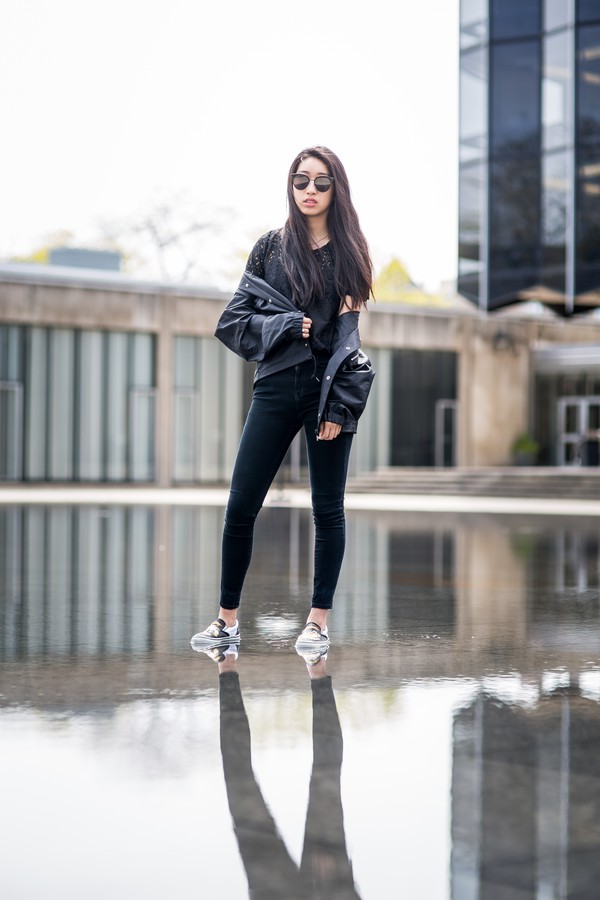 Renee is wearing a jacket by ATTACHMENT, a lace top, jeans from Urban Outfitters, slip-ons by Rollicking x Vans, and sunglasses by Gentle Monster. 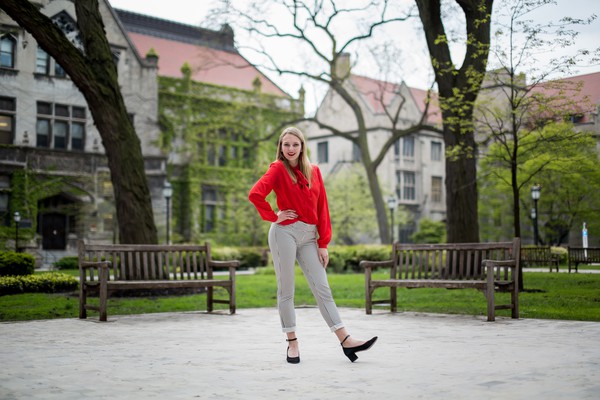 I think a woman can be graceful but also powerful. One of my biggest inspirations—perhaps not in fashion, but life in general—would be Supreme Court Justice Ruth Bader Ginsburg. I think she's a phenomenal human being and an example of someone who might seem frail but embodies sharpness and power. She wears these crazy dissent collars because the male justices wear ties, but the women don’t have anything interesting to wear under their robes. So she originated the dissent collar, and that’s why Kagan and Sotomayor started wearing them. And that’s why I like to wear crazy bows or ties around my neck trying to emulate RBG.

I wear a lot of feminine, classic hourglass cuts to class, like A-line miniskirts and thrifted silk blouses. Occasionally I’ll wear short, block heels—walking across campus is very impractical in four-inch heels. I tried and failed miserably on the cobblestones! On the weekends, it’s more of a Madewell aesthetic: jeans, slip-on sneakers, and other basics. But then I add surprising necklace—I’m really into hammered brass or gold—it’s sort of "femme-dustrial" chic, I call it. 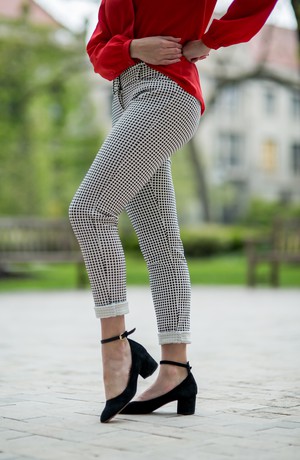 With the exception of shoes and accessories, Lexie's outfit is completely thrifted.

Femme-dustrial…. It’s hard metals, but maybe there’s a touch of pink to soften it. As a little girl, I grew up with pink and skirts and the like—I did ballet, so all I owned was pink and skirts. Ballet is another example of power hand-in-hand with grace. I love getting a new pair of pointe shoes because I think they're the most beautiful, badass thing you can craft: You get them and they have these long, beautiful satin ribbons but they’re not ready to be worn yet. So much physical labor goes into transforming them, breaking them in. To avoid fraying on the ribbons you burn them with a lighter and pinch them down. You literally take a rubber mallet to them, bend them, put them in the doorframe—you do whatever to make them more malleable so you can wear them.

"I love thrifting because you never know what you're going to find."

I'm wearing a Dior blouse from the '60s—speaking of, I just did a presentation for a comparative literature class on fashion and modernity about Dior and the New Look fashion of the '50s. A lot of people—Coco Chanel in particular—criminalize Dior for bringing back the corset (and for good reason, because it is very unhealthy). But I think Dior should be allowed some charity for what he did with his fashion. World War II had just ended; clothing was rationed, and everything was very expensive because of the war. Women would draw seams up the back of their leg in eyeliner because they couldn't afford silk stockings since silk was used for parachutes. Then Dior came in and brought back these sumptuous, feminine, impractical clothes that women would have never worn during the war. They had to dress practically, in jumpsuits or shorter skirts that wouldn't get caught in factory machinery. Dior did away with their need to work by taking away their practical fashion which, in terms of the feminist movement, is really not a step in the right direction—but perhaps it was also a kind of liberation for women to have the option to be feminine again. 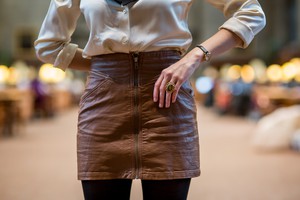 Lexie's cameo ring once belonged to her grandmother. Cameos are reliefs carved onto materials that exhibit contrasting layers.

I thrifted this blouse for $30—I love thrifting because you never know what you're going to find. You find beautiful pieces that otherwise wouldn’t be seen anymore by the world. But since someone decided to donate it, you get to rock these trends as fashion is so cyclical. And that’s what I find fun about fashion. Maybe you find a piece that you absolutely adore, so you wear it for as long as possible. Maybe it was trendy back when you bought it. But you know they'll come back someday—except for those clear-knee jeans Topshop sells, those are skeezy. It’s cool when that happens because you’ve been wearing them forever and you get to say, "Oh, this? I've been rocking it for years."

Floral embroidery is very popular now—I really wanted a pair of embroidered jeans, but they're expensive and I couldn't find the right pair, so I decided to DIY. My mom taught me how to sew and embroider. I came to her and said, "Listen, I want to try this trend out, but I don't want to spend money just to have them not be popular for a while. But if I put the time into them, they'll be a lot more meaningful for me than something that I just wear for a season or two.”

Shop responsibly, shop ethically. If you must follow trends, do what you can to make your choices healthier for the environment. Do not be afraid to be badass and graceful at the same time. —LEXIE 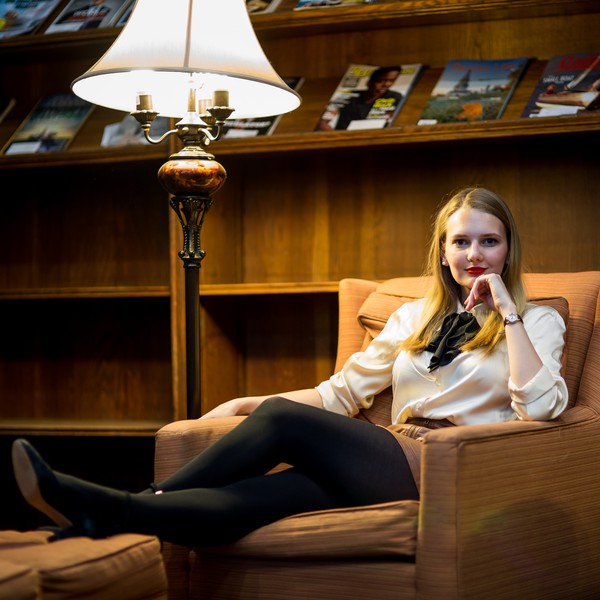 Lexie is wearing a thrifted blouse from Michael Kors and a thrifted skirt from Pimkie.