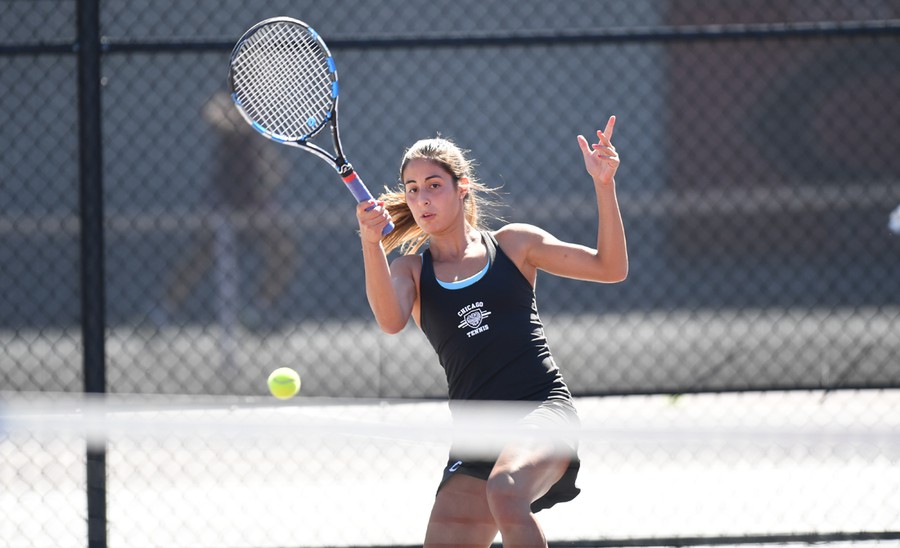 Third-year Ariana Iranpour prepares to return the ball over the net.

Last weekend the University of Chicago women’s tennis team hosted the second and third rounds of the NCAA Division III Championships. The Maroons received a first-round bye after an impressive season that ranked them ninth in the country. They steamrolled Augustana 5–0 in their second round matchup on Saturday and continued on to earn a dominant 5–1 victory over No. 38 Gustavus Adolphus in the third round on Sunday. The Maroons improved to 18-4 and will travel to Chattanooga, TN, to compete in the quarterfinals against No. 4 Williams next weekend.

The Maroons have seen varying levels of competition over the course of the season, and they will undoubtedly see better and better opponents as the tournament progresses. One of their goals for the weekend was to play championship-level tennis, regardless of the level of their opponents. The team “maintained a high level of intensity throughout the weekend,” first-year Estefania Navarro said.

“We competed our hardest and kept each other positive. Our head coach wasn’t there to watch us because he was traveling with our men’s team, so both of our assistant coaches stepped up and really showed their belief in us…we really proved we can handle ourselves under pressure.”

Saturday’s match against Augustana began with three doubles victories, putting the Maroons ahead 3–0 heading into singles play. All six UChicago women won their first sets, setting the tone early on. Navarro and first-year Alyssa Rudin quickly finished off their opponents in the next set (6–1, 6–0 and 6–1, 6–2 respectively), earning the remaining two points needed for victory.

On Sunday the Maroons faced off against Gustavus Adolphus in the second match of the weekend. UChicago earned two points in doubles play, giving the team a slight advantage going into singles. Again, all six Maroons won their first sets to weaken the spirits of their opponents. Another speedy victory by Navarro (6–1, 6–2) and wins from second-year Rachel Kim (6–0, 6–3) and first-year Marjorie Antohi (6–0, 6–2) clinched the match for the Maroons.

Over the course of the weekend’s matches, Navarro was able to elevate her play to secure wins for her team. “Before this weekend I hadn’t been playing my game the way I would have liked to,” she said. “I was holding back on my shots, and putting a lot of unnecessary pressure on myself. I decided to approach these two matches like I would in practice: working on being aggressive and playing my game instead of focusing on the result. In the end it paid off; I played the best I have in months.”

In addition to individual achievements, Navarro emphasized the importance of playing for her teammates. “We want nothing more than to finish strong. We have two seniors on the team who have changed the culture for the better, and this tournament is for them and the hard work they have put into this team,” she said.

The Maroons will continue to look for consistency and excellence in next weekend’s quarterfinal.