South Side With You

The Obama Foundation can prove it cares about the South Side through a community benefits agreement. 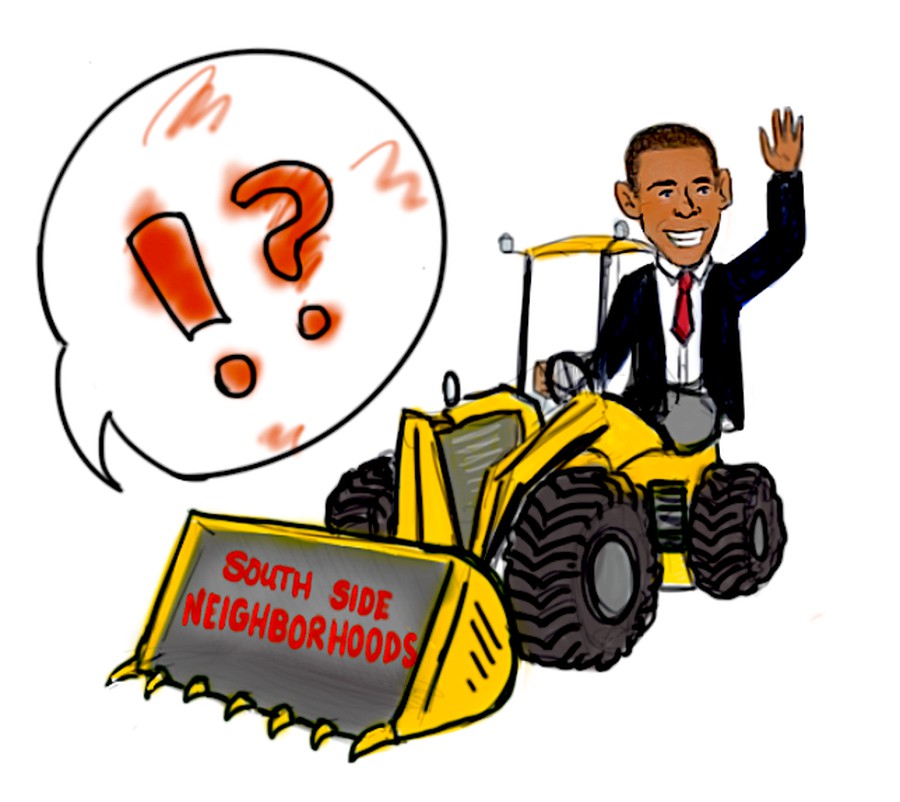 In four years’ time, the Obama Presidential Center will see its grand opening in Jackson Park. Over the next decade, the Presidential Center could generate $2.1 billion in revenue for the area in addition to creating an estimated 1,000 new jobs. The center is intended to rejuvenate the area and provide a community center for residents who have historically been neglected. However, given the city’s and the University’s own failed attempts at renewing the area in the past, can we really trust this project will not fail in the same way? Residents of Woodlawn and Washington Park should be provided a community benefits agreement (CBA) with the center’s developers; such a binding contract would effectively guarantee that these ambitious construction plans would improve residents’ well-being.

Barack Obama has a special relationship with the area, working first as a community organizer and then as one of the South Side’s representatives in Springfield. The South Side has responded with overwhelming support for their favorite son: he received 95 percent or more of the vote from Woodlawn precincts in the 2008 presidential election. Obama’s personal work in the South Side throughout the decades likely means that the center has good intentions and may stand to help address many of the inequalities in schools, housing, and employment. The question, then, is not whether the center should be built, but how.

Previous attempts by the city and even the University to foster “urban renewal” in the 1950s and ’60s led to the displacement of more than 4,000 families, the large majority of whom were poor and black. Large areas of the Hyde Park neighborhood were completely destroyed, erasing an important part of community history. As noted in an in-depth feature by The Gate, after the area was rebuilt as part of the University’s first phase of their so-called “urban renewal” plan, “46 percent of the white families and 49 percent of the white individuals uprooted by the demolitions were relocated within Hyde Park or Kenwood; only 17 percent of the black families and 14 percent of the black individuals found similar accommodations.”

A CBA, or a legally binding agreement between community members and developers, would be the best step to ensure that history doesn’t repeat itself. In exchange for residents’ support, the Obama Foundation would take actions to preserve or even improve the community’s well-being. Activists rightly note that benefits to the community shouldn’t simply be “declared” by those in power, but be fairly negotiated between the Obama Foundation and those living in the affected residential areas. The Obama Library South Side Community Benefits Agreement Coalition, which is composed of four different South Side organizations, hopes that developers will work with the community and prioritize “job development, protection of current residents’ ability to stay in the neighborhoods surrounding the library, partnership between the library and local schools, and environmental sustainability goals, including replacement of the 21 acres of park land that the library will eliminate.”

Although the Obama Foundation says the center will improve the area, these often-toothless refrains about “community engagement” might ring hollow for those residents familiar with the effects of gentrification. A CBA would give the community the leverage they deserve, as they can seek legal recourse if developers fail to hold up their end of the bargain.

If the Obama Center developers are serious about rejuvenating the area, then they should have no problem taking into account what South Side residents want. Otherwise, it’s possible that the Center could wreak more havoc, once again displacing families of color due to rising rent costs and gentrification. South Side resident Claire Cardy put it best during an April 10 town hall meeting on the issue: “We get a lot of promises, and as you have seen, it doesn’t mean anything. What do we want them to do? We want them to build it with us.”

Big, ambitious projects on the South Side have failed to deliver for their neighbors before, and could do so again. Signing a CBA, then, would earn the community’s trust and further cement Obama’s plan to foster civic engagement and community-based action through the center. Instead of allowing the question of the CBA to sit unanswered, the Obama Foundation should seize it as an opportunity to be a model of how powerful institutions can address the concerns of their community.

“You’ve got six-figure, seven-figure people that are coming in here and telling us what to do, but this is not affecting them. You’re not living in this this housing.”