Musicians Mine for Jazz Gems and Strike New Chords 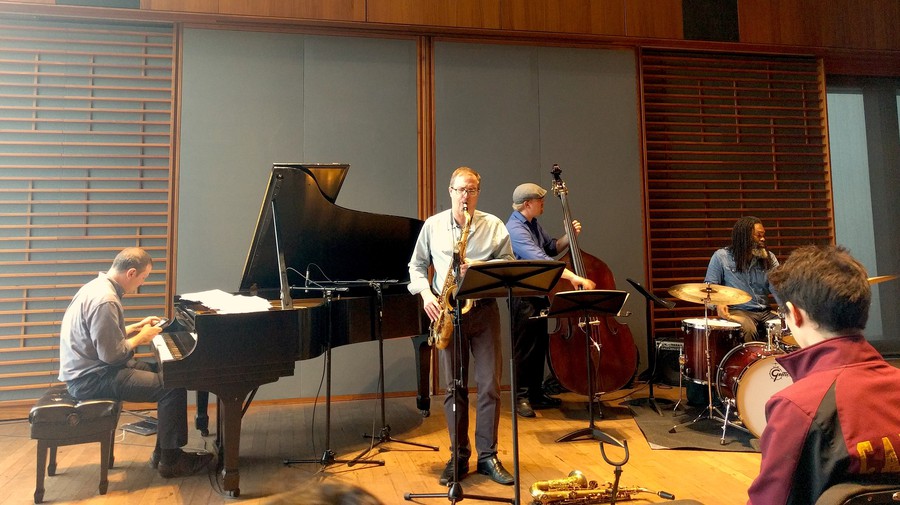 If you walked into the Logan Center Performance Penthouse last Sunday afternoon, you would have been greeted by music: a lively and swinging quartet of piano, sax, bass, and drums.

“Mining the Tradition: Modern Voices Reanimate Historic Jazz,” was a collaboration between the Coalition for Jazz Education and Performance (CJEP) and the University of Chicago Careers in Journalism, Arts, and Media (UCIJAM). As its name suggests, the event—simultaneously a concert and conversation—showcased jazz works that had been arranged and adapted by Chicago musicians for modern ensembles.

Taking place on International Jazz Day, the event was a fitting close to a month that celebrated the birthdays of jazz legends, such as Ella Fitzgerald and Duke Ellington, and is nationally recognized as Jazz Appreciation Month.

“A lot of the good conversations I have with students…are about how [to] locate yourself within the history of the discipline you’re pursuing,” explained Ben Waltzer, the Klingensmith Program Director of UCIJAM and pianist in the quartet. As a jazz composer and musician who works closely with students through the university, Waltzer believes that making meaning through locating yourself in your creative field of study is essential, whether it be theatre, music, or journalism.

For Waltzer and the other artists who performed on Sunday, this means going beyond appreciating the music of certain musicians to reinterpreting it.

“[We find] musicians whose works may be challenging or not known as well…[and then make] it part of a modern scene,” said Waltzer, speaking to the kind of “reanimation” that the artists engage in.

Drummer Dana Hall, an ethnomusicologist and director of Jazz Studies at DePaul University, primarily explores such reanimation through the music of jazz pianist and composer Andrew Hill.

Hall, who has been listening to Hill’s music for around three decades, came to terms with how challenging the music was when he began transcribing the material.

“One of the main reasons why you didn't hear people playing it was because of the difficulty in interpreting what exactly the musicians are doing, and the different ways that they seem to be negotiating that music,” Hall said. “Just hearing it was difficult.”

Saxophonist Geof Bradfield, an acclaimed composer and musician who teaches at Northern Illinois University, expressed similar sentiments—he spent 100 hours transcribing the original ensemble arrangements for Herbie Hancock’s The Prisoner (a length of time considered relatively short by anyone who knows the work). This endeavor often included guesswork, since the musicians did not always play the right note—although perhaps jazz pianist Art Tatum spoke best to the improvisational spirit of jazz by insisting, “there’s no such thing as a wrong note.”

Thus, although most of the pieces the quartet played on Sunday remained fairly true to their original compositions, including a quartet rendition of The Prisoner, the relatively short length of the originals welcomed room for improvisation in their contemporary arrangements.

“What I wanted to do with this project was to not only bring all the transcriptions to life but to also think of ways we could add our own personality and our own unique approach to that material,” Hall said.

He wondered how they could emphasize the “elasticity” of a particular piece based on contemporary music. Musical touches, such as holding the phrase back at the end of the piece, created this “stretch” while adding a hip-hop feel to the end imbued it with modern flair.

The musicians likened such methods of arranging and performing to how people nowadays adapt Shakespearean plays for modern audiences, playing around with the notion of ‘version.’

“We develop a language based on the music that we love,” Waltzer said.

And perhaps the musicians’ work on these pieces feels extra close to home because the music itself is rooted in Hyde Park history: Herbie Hancock grew up a block from the Logan Center, and Andrew Hill went to school at the University of Chicago Laboratory Schools.

“A lot of the music we are playing is very local and community-oriented,” explained Waltzer. “This music has a reverberation.”

Sonically, the music certainly reverbed throughout the performance hall on Sunday; among the most memorable pieces played were Art Hodes’s lively “Stuff and Nonsense” and Melba Liston’s “Just Waiting,” a slow and bluesy tune carried by a gentle piano melody. Bradfield had spent a month sorting through 45 boxes of Liston’s records to write Melba!, an original suite based on her life. Melba! premiered on NPR, featuring bassist Clark Sommers, whose musicality made the bass the steady bedrock of all the pieces performed on Sunday. Sommers, who tours internationally, has been playing for years with Bradfield and Hall on groups such as Hall’s “Black Fire,” named after Andrew Hill’s album.

“What you’re really hoping for is to find something that nobody’s recorded or ever heard before, but it’s a magical gem,” Bradfield said about the process of trawling the boxes.

And perhaps that is what the musicians discover through their own arrangements as they “mine” the tradition—magical gems that no one has heard before, or at least heard with such contemporary verve. Works by historic jazz figures are transcribed and transformed through compositions that reanimate them, recreating an important musical scene that allows jazz traditions to reverberate in the present.