From "Alley L" to Arts Block: A History of Garfield's Green Line Stop

“[The station] is an acknowledgement of the history of this city, the South Side, the World’s Fair." 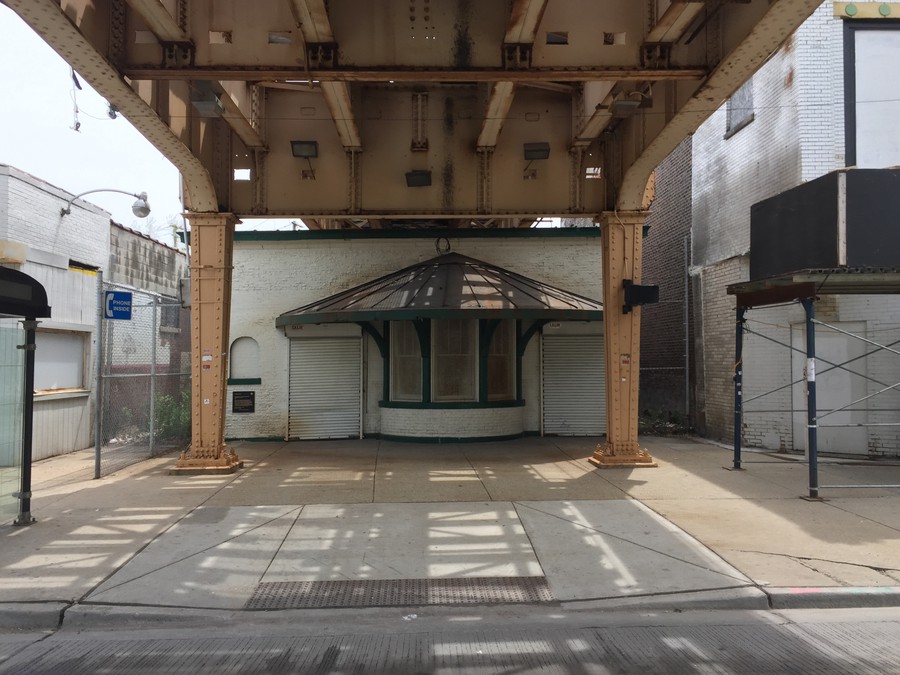 The old 1892 Garfield station stands across the street from the current Garfield Green Line station.

Across the soggy spring fields of Washington Park sits the CTA’s oldest El station, and its future is up for grabs. The University hopes to include the original Garfield station—which lies across the street from the current Garfield Green Line stop—in the newest phase of its “Arts Block,” casting one Washington Park resident’s plan into doubt.

While the original Garfield station no longer operates today, it once served thousands of commuters. One October day in 1892, ten thousand people per hour passed through the gates of this small brick building under the El tracks. They were headed to Jackson Park to see the World’s Columbian Exposition. While the opening of the fair was still several months away, Chicagoans and visitors alike were eager to lay their eyes upon the gleaming “White City” that would show Chicago off to the world.

Meanwhile, construction crews on East 63rd Street were hard at work. Snaking its way through the South Side, Chicago’s first elevated railroad would soon transport millions of visitors to and from the fair. As tracks were laid and steel beams made, the Alley L aimed to arrive at its Jackson Park terminus before the fair’s grand opening.

Before the "Alley L"—today’s Green Line—reached Jackson Park in May 1893, trains temporarily terminated at East Garfield Boulevard in Washington Park. A reporter noted that the Alley El’s completion “will be received with much satisfaction by the small army of fair employees who have been tramping to their offices through a mile or more of snow from the nearest railway station.”

The small Garfield station was a busy place. More than 100,000 passengers disembarked at Garfield on October 21, 1892, about a week after the station opened. On their way to the White City, they passed through the fields of Washington Park and the quadrangles of the new University of Chicago, broken-in by the University’s inaugural class just three weeks earlier.

Today, little remains of this scene. Most of the fair’s structures and promenades are long gone; even the rickety El tracks on East 63rd Street have bitten the dust, demolished in the 1990s, leaving Cottage Grove as the Green Line’s eastern terminus.

Yet a piece of the past lingers a couple stops above Cottage Grove. Across the street from the current Garfield Green Line station, the original 1892 Garfield station remains. White paint peels off brick, rusty grates gate the ticket window, and, though people no longer pass through its doors, the structure still stands.

“The very fact that it’s still standing is a nod to the city’s ever-expanding, ever-changing system of transit,” said Peter Alter, a historian at the Chicago History Museum. “If you hopped on the Alley El in 1892 or ’93, what would have been pulling your car was much different, almost like a small steam engine. It was more like riding a large train on elevated tracks. And there were all sorts of concerns. People would wonder, ‘How is the train going to stay up there? It’s going to collapse.’”

While the original Garfield station closed to commuters in 2001 when service shifted to the new station across the street, it retains a special significance for history buffs and transit aficionados. According to Graham Garfield, the CTA’s General Manager of Customer Information, it is the oldest remaining rapid transit station in Chicago and possibly the oldest in the country.

“[The station] is an acknowledgement of the history of this city, the South Side, the World’s Fair,” Alter added. “Just as people interested in the history of old ballparks go to Wrigley Field, the station—in a smaller, older way—is that place for city transit.”

A mix of Queen Anne and Chicago-style architecture, the station is unassuming but unique. Garfield mentioned that the CTA hopes to restore the station’s original color scheme. White and green paint currently obscure the original red brick, which was once multicolored near the top of the building.

Despite repeated requests to the CTA to transfer ownership to a community-led group, Butler said the CTA “did nothing with the building for years.” It wasn’t until last year, she said, when the CTA received a $25 million federal grant to renovate the current Garfield Green Line station, that it began soliciting bids for the original station.

In the meantime, the University has revealed plans to include the station in its Arts Block project, a repurposing of several properties between South Prairie Avenue and South King Drive. “Our goal is to provide a platform for individual artists, emerging entrepreneurs and other community organizations, as well as celebrate the rich history of Washington Park and the historic CTA station,” said Sonya Malunda, the University’s Senior Associate Vice President for Community Engagement.

CTA spokesman Steve Mayberry said the contract for the original station—which lies across the street from the current Green Line station—has yet to go before the Chicago Transit Board. The CTA does not know when, or if, it will be awarded to the University.

“Now the community is pitted against the money of the University,” Butler said. She envisions the station as a future home for the Washington Park Historical Society. Asked where the society is located now, she looked around the room—a computer lab in the Washington Park Fieldhouse—and said, “It’s here.” She added, “And in my house, in my garage, in another building in the neighborhood.”

Butler proudly pointed to assorted artifacts in the room, including posters for Chicago’s 2016 Olympic bid, which would have placed the main stadium in Washington Park. The posters were made by Goes Lithographing Company, which operated printing presses in Washington Park for more than 100 years before leaving the neighborhood in 2010. At home, Butler has a piece of marble from the demolished Michigan Theater, a grand 1916 movie house that once sat on East Garfield Boulevard and South Michigan Avenue. A wooden coast guard boat, once anchored in the Washington Park lagoon, sits on a vacant lot at East 60th Street and South Calumet Avenue.

“Right now, there’s no place to share all this,” Butler said, describing how the station would display various artifacts. The boat could sit in the grassy lot behind the station. “This community hasn’t asked the University for much. But [the station] is the one thing they should share,” she said.

For now, though, the original Garfield station is just another shuttered building. The El rumbles above, casting shadows over the small structure below. Inside, it is empty. Its ticket booth and turnstiles were removed when the station closed sixteen years ago. It is largely ignored by commuters waiting for the #55 bus a few feet away.

Not all passersby overlook the station, however. “1899!” yelled an older man dragging a beat-up suitcase down Garfield Boulevard on a recent rainy afternoon. While he was seven years off, he got the point: “This here’s history,” he said. “This here’s history.”