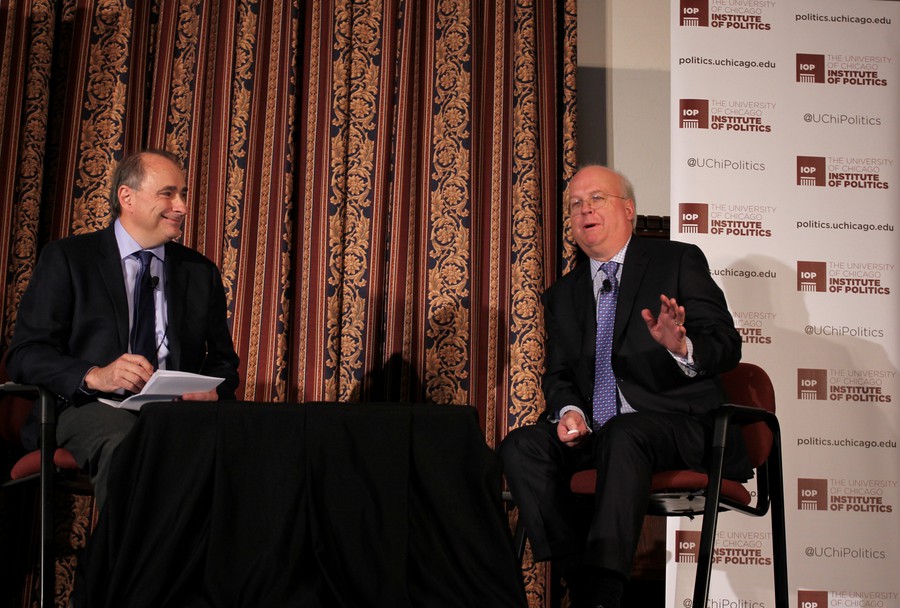 Rove attributed Brexit, support for Le Pen, and other populist stirrings to European economic troubles and to the outsized power exercised by the European Union. “Particularly among older voters, there was a sense that they had lost authority to these anonymous bureaucrats in Brussels,” Rove said.

Axelrod and Rove agreed that Macron’s win is far from a signal of the defeat of nationalist politics in France, and that the rising tide of populism will continue to spread across Europe.

“We’re seeing this all across Europe. If not for Merkel, we’d see this in Germany,” Rove said. “This is the beginning, not the end. [Le Pen] got almost twice the percentage that her father got.” Marine Le Pen’s father, Jean-Marie Le Pen, is the founder of France's far-right Front National party, and received 18 percent of the vote when he ran against Jacques Chirac in 2002, compared to his daughter’s near 40 percent.

Turning to the Trump administration, Rove said he worried that Trump is influenced by the mercantilist policies of Peter Navarro and Steve Bannon, who advocate against trade deficits at all costs. Rove emphasized that Trump is uninformed on key economic facts, citing a private conversation in which the president was surprised to learn that America has a trade surplus with Canada.

Rove said that Trump makes an effort to appoint cabinet members who do not agree with him on all issues, and praised his choices of Secretary of Homeland Security John Kelly, and Secretary of State Rex Tillerson, as Rove says they aren’t afraid to disagree with the President.

“There’s a willingness to tolerate people around him who don’t share his, you know, ‘yes, I’ll agree with everything you tell me to do and go execute,’ and who say, ‘here’s what I think,’” Rove said.

Rove commended Trump’s ability to hear points of view that diverge from his own, but criticized the infighting of the current administration, saying that staff members are eager to leak stories to the press, and that White House culture was entirely different when he worked for the Bush administration.

“The idea that, in this White House, people are so disloyal to the President and their colleagues that they’re willing to conduct warfare in the pages of the Washington Post and The New York Times…I think this is completely unconstructive.”

Rove later shifted away from conflict in the White House administration to criticize the Affordable Care Act, although he did not explicitly endorse Trump’s alternative health care bill. He argued that Obamacare places too heavy a burden on young, healthy members.

“Anybody below the age of 50 is paying a higher premium than they would otherwise pay, in order to subsidize people who are 54 to 65, despite the fact that that is the group that has, on average, higher incomes, greater wealth, and fewer childbearing and childrearing expenses than everybody below them,” Rove said.

He quoted from the new bill being proposed by the GOP, which states that pre-existing conditions should not “limit access” to consumers seeking a health care plan.