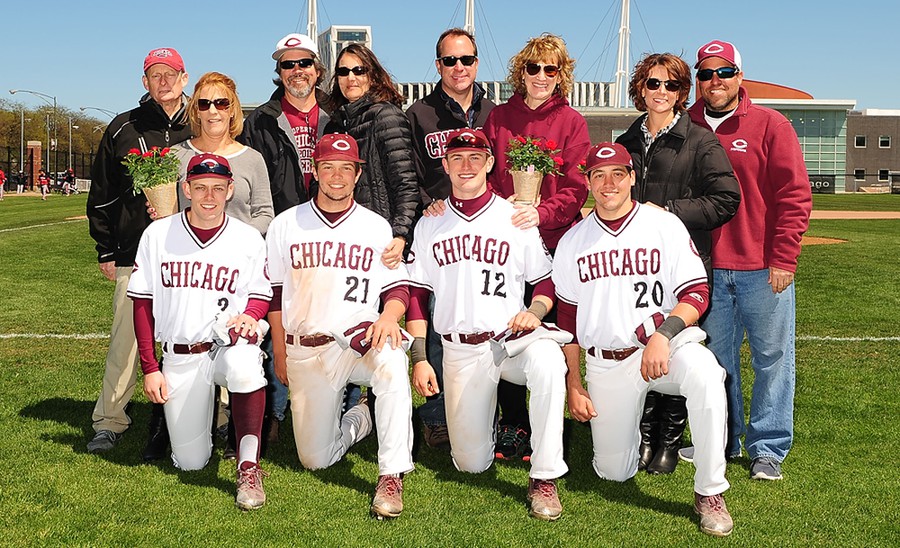 The graduating seniors are honored with their parents on Senior Day.

The Chicago baseball team completed their home schedule this weekend with four wins over Illinois Institute of Technology (IIT) (28–11). The Maroons will complete their regular season schedule with a game against Benedictine on Thursday and a four-game series at Wash U this weekend.

The Maroons (21–11) concluded the four-game sweep of IIT by a combined score of 50–19, relying on consistent hitting and aggression on the base paths all weekend, seen in their 20 stolen bases. The team started strong by blowing out the Scarlet Hawks 16–5 on Friday night.

Saturday’s game was played at Guaranteed Rate Field, home of the Chicago White Sox, for the South Side Classic. This game proved to be a remarkable experience for both teams as many of the players were living out a childhood dream of playing on a major-league field.

The Maroons got off to a quick start on Saturday, jumping out to an 8–0 lead before the Scarlet Hawks attempted to mount a comeback off the Maroon’s bullpen in the seventh and eighth. With the tying run at the plate, first-year reliever Patrick Rogers escaped a jam with a 5–4–3 double play to end their charge. Second-year Joe Liberman was crucial for the win for the Maroons as he pitched five shutout innings and allowed only one hit.

Sunday’s games were a bit more one-sided for the Maroons on Senior Day as they won 14–4 and 12–4. In both games, Chicago scored big in the fourth inning with nine runs and six runs respectively. The first game of the doubleheader saw first-year Jacob Petersen pitch a complete game without an earned run (four unearned runs). The offense was led by fourth-year Tom Prescott, who was 3–3 on his senior day with a homer and three RBIs.

The Maroons continued to thrive in game two of the doubleheader with 15 hits. Four of those hits came from second-year Ian Bohn who was a perfect 4–4 in game two with five RBIs and 6–8 on the day.

The Maroons honored their four seniors Sunday: shortstop Ryan Krob, baseman/pitcher Prescott, third baseman Tim Sonnefeldt, and outfielder Nick Toomey. Over their four years they have totaled 67 wins and look to add a few more this week as they take on Benedictine and Wash U.

Chicago will next see action on Tuesday at Benedictine (23–15). This game will be Benedictine’s last game before their conference tournament which starts on Thursday. Benedictine’s pitching staff comes into this weekend with a team ERA of 4.03 and will hope to keep Chicago’s lineup to a minimum. The Maroons feature the seventh best batting average (.350) in the country lead by 20th ranked second-year Connor Hickey at .441.

The Maroons will take on Benedictine at the Village of Lisle-Benedictine University Sports Complex at 7 p.m. on Tuesday.