JC Rivera on Being a Champ and Rolling with the Punches 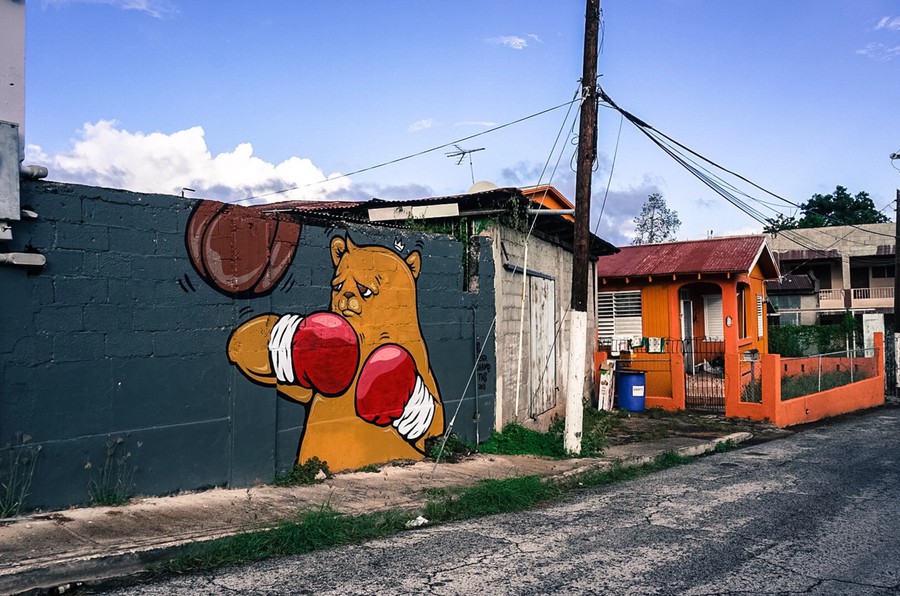 A droopy-eyed yellow bear wearing bright red boxing gloves adorns many walls downtown, from Wicker Park to the West Loop. A small white crown hovers above his squarish head. Sometimes the bear’s fists are held together in defense; other times they are raised, poised for a fight.

This is the “Bear Champ,” created by artist JC Rivera, who spoke at the Logan Center last Friday at “CreativeMornings,” a monthly breakfast series that began in 2008. Every month, artists are invited to speak around a theme chosen by one of the 172 global chapters, and the theme for June—selected by the Baltimore chapter—was “Survival.”

“I just want to talk [about] how I survived, pretty much,” said Rivera when he introduced himself.

When Rivera first arrived to Orlando from Puerto Rico, he spoke no English and worked three part-time jobs to get by. Eventually, he began experimenting with Photoshop on a computer he bought for $150 at a pawn shop, and soon created the Bear Champ. Rivera later moved to Chicago and was offered a number of commissions, but it was not until American Express approached him in 2014 about painting a mural that he had his first big break.

The initial Bear Champ had wings and smoked a cigarette—but “nobody got it,” Rivera reflected. Indeed, the scrappy character has come a long way. Bear Champs stems from Rivera’s childhood dream of becoming a boxer, a profession that his mother vetoed because it was too risky. That would not be the first time Rivera’s dreams were crushed; he studied computer science in college because his father argued that there was no money in becoming an artist. 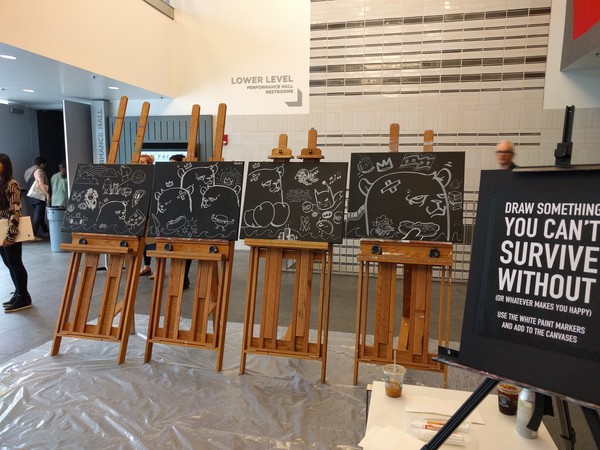 Some attendees won a chalk drawing as part of a balloon raffle that took place before Rivera took the stage.

But the bear is now a symbol of something greater than rejected aspirations. He represents “rolling with the punches,” as Rivera put it—dodging life’s blows and adapting at every turn to be stronger.

“I gotta try to survive,” he said, explaining that every day is different for independent freelance artists. He helps others survive, too, sometimes painting commissions for free, collaborating with other artists, and passing on gigs. “CreativeMornings,” which features 30-second pitches from community members who are working on creative projects and potentially looking for collaboration, similarly creates opportunities for networking—a skill that Rivera credits for his survival in the field.

“I’m 38 today,” he said. “I’ve been around. I’m a working artist. . . . I just wanna be completely proud of what I’m doing.” Rivera has spent the past nine years working as a cartoonist, toy designer, and graphic designer, showcasing his art in galleries, on street walls, and online. He used to ask people whether he could paint their walls (in 2013, he was arrested for tagging). Nowadays, he mostly works on commissions. Bear Champ has come a long way, and so has he.

“How much of the bear is you?” asked an audience member. Rivera’s response—“Everything.”

JC Rivera’s next show, “Knockout,” will debut on July 22. He is also working on developing a TV show for the Bear Champ. Follow his work on Instagram @jcrivera.