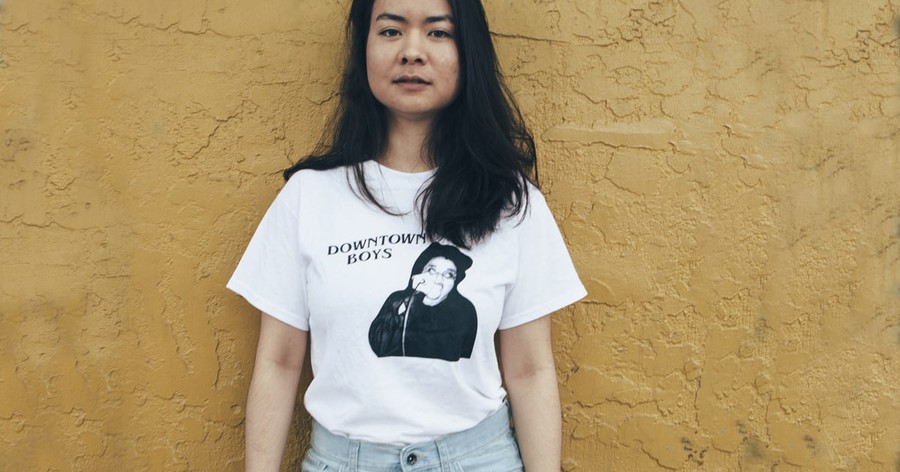 There seems to be an urge for the press to contextualize Mitski for those who might not know her: she’s either a lone rocker creating anthems for the dispossessed, or a vulnerable singer-songwriter, elevating confession to an artform. But she transcended both these categories at the Pitchfork Music Festival last Saturday, where she—a formidable force with a furrowed brow and orange culottes—performed to a swarm of fans, her soaring voice searing in its intensity.

It is unclear why Pitchfork decided to give her the smaller Blue Stage; nevertheless, Mitski stayed almost center-stage the entire time she performed, moving only to fix her amp or to take a quick swig from her water bottle. The set was a good mix of her two acclaimed albums Bury Me at Makeout Creek and Puberty 2, and carefully structured to create a complete emotional arc that began with the nihilistic desperation of “Townie” and “Francis Forever,” built up to the heart-breaking vulnerability of “Your Best American Girl” and a relatively stripped-down “First Love / Late Spring,” and finally exploded into incandescent defiance with some of her best songs, “Drunk Walk Home” and “My Body’s Made of Crushed Little Stars.” Though she at first seemed overwhelmed at first by her fans’ enthusiasm, Mitski stayed quiet, offering thank yous and well wishes as she transitioned from one end of the emotional arc to another.

The structure of this arc was not coincidental. As Mitski later revealed during a post-show interview at the Pitchfork Book Fort, the transformative, emotional power she wants to convey in live performances is linked to her hope that fans can “see [her] as a metaphor or a symbol when [she’s] on stage.”

Mitski, however, pushes back on being a symbol. As a Japanese-American within the music industry, she rejects being categorized by her background because she feels “so much pressure…to represent” minority groups. Instead, her music reflects her refusal to speak for anyone outside of herself. Yet this openness is the very quality that draws so many to her music. She flips a trope only to insert a universalizable, pure emotion in its place. I underestimated the emotional power Mitski’s voice could contain; as she screamed “I’m not afraid to die” in “My Body’s Made of Crushed Little Stars” last Saturday afternoon, I felt free.

“I like to keep it vague so that more people can understand…the core emotions that I feel,” she said about her songs. In deliberately avoiding the more transparently autobiographical pieces from her older albums (such as “Because Dreaming Costs Money, My Dear” from Retired from Sad, New Career in Business) on Saturday, Mitski, with her “outsider’s eye,” created a more relatable space where fans could participate and feel understood.

“This has been my dream since I was little, so thank you, thank you so much,” she said with characteristic humility and gratitude at the end of her set. “There are no words.” There are no words, indeed. As her Pitchfork set showed, Mitski is America’s answer to the question, "What would Janis Ian sound like if she had been born after Weezer and the golden age of J-rock?" We stay enthralled by how much Mitski has given us, and how much she will go on to achieve.