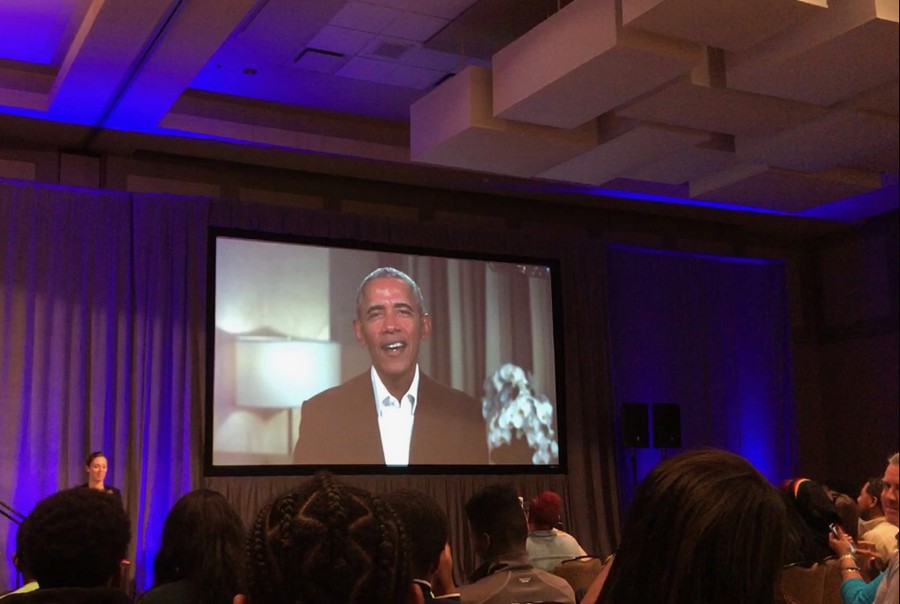 Barack Obama said via video conference at an Obama Presidential Center community event Thursday night that that his foundation will not sign a community benefits agreement (CBA) because he thinks it could not possibly be inclusive enough of all the interests of the community.

He addressed community activists’ calls for a CBA after Woodlawn resident Jeanette Taylor used the first question of the event to challenge him to explain the Foundation’s decision to oppose signing an agreement that would legally bind the Center to providing benefits for the surrounding communities.

Obama spoke for a minute or two about the Foundation’s commitment to the community in general terms, without specifically addressing a possible community benefits agreement, when Michael Strautmanis, vice president of civic engagement at the Obama Foundation, tried to move on to the next question. However, Obama stayed on the subject, and addressed the CBA directly.

“The concern I have with respect to a community benefit agreements in this situation is that it's not inclusive enough because I would then be signing with who?” he asked. “What particular organizations would end up speaking for everybody in that community?”

Here's why Obama says they're not going to sign a community benefits agreement: pic.twitter.com/Rn0tfIDw4x

“I'm not an outsider here. I know the neighborhood. I know that the minute you start saying, well we’re thinking about signing something that will determine who is getting jobs and contracts and this, that, and the other, next thing I know I've got 20 organizations that are coming out of the woodwork, some of them that I've never heard of before…and—I'm being very honest with you at this point—we want to work with everybody in a transparent way,” he said.

Obama also stressed that the Foundation is a nonprofit organization, not a business, which is one of the reasons why he opposes a CBA for his library and center even though he was once a young community organizer on the South Side.

Taylor was part of a group that camped overnight outside the Hyatt Regency McCormick Place hotel, where the event was held at a ballroom inside, to demand a CBA. Advocates for a CBA have said they want the Foundation to make job commitments for nearby residents, community school partnerships, contracts with locally owned businesses, and public transport and parkland improvements.

On the stage at the forum were lead architects Tod Williams and Billie Tsien, presidential center museum director Louise Bernard, Strautmanis, and lead landscape designer Michael Van Valkenburgh. About 500 people attended, many of whom travelled from South Side neighborhoods near the future location of the Center in Jackson Park.

Obama’s video call came as a surprise to the audience. Strautmanis later said that the people who were selected to ask questions weren’t even aware that the president would be the one to answer them.