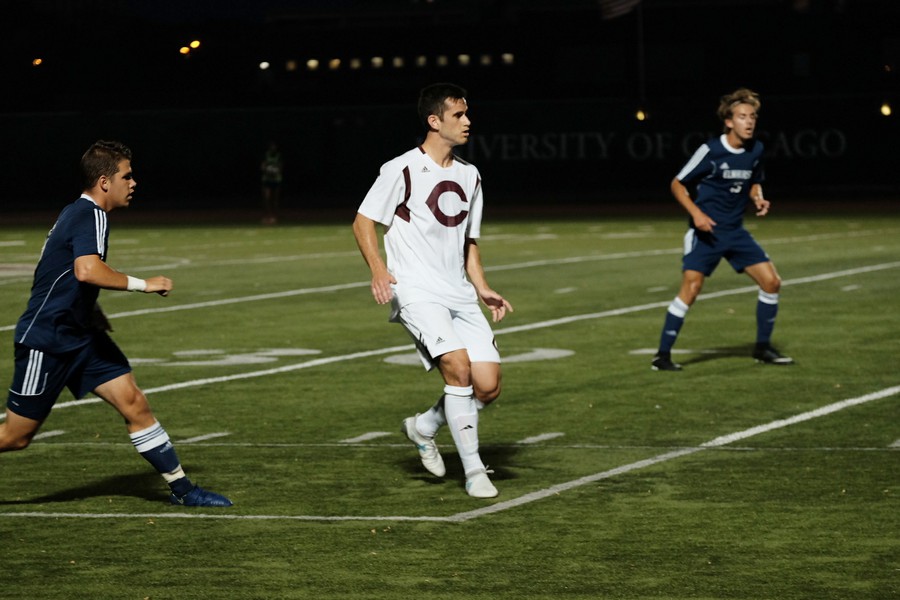 Fourth-year Andre Abedian races up the field shadowed by defenders.

The UChicago men’s soccer team sits atop the NCAA DIII rankings, which seems almost commonplace for the Maroons, who spent a good portion of last year also being ranked No. 1. This season started off September 1 with a hard-fought 2–1 win against Whitworth. Then the Maroons started rolling, notching scores of 4–0, 7–1, and 6–0, to highlight a few of the contests. Fourth-year goalie Hill Bonin commented on the start to the season by saying, “Our matches at Wheaton and Loras have definitely been highlights so far. We actually had not beaten Loras until this year. Those were both gritty and hard-fought wins where we didn’t play our best but still had the determination to get a result.”

At about the halfway point in the season, UChicago has outscored its opponents 32–5. They have also defeated two ranked teams and look primed heading into UAA play. UAA play kicks off this weekend at the University of Rochester. Last season, UChicago rallied to beat the then No. 4 Rochester 2–1. Bonin commented on UAA play, saying, “Going into conference play in the UAA, you have to get results even if you aren’t playing your best.” With talented teams and difficult travel on the horizon, Bonin said that the Maroons are simply “taking it one game at a time and making sure that we put our best effort into every game.”

The Maroons returned a loaded roster of nine starters but they have dealt with a few injuries so far. Another challenge facing coach Mike Babst this season has been incorporating a talented first-year class into an already stacked roster. Third-year defender Josh Scofield commented on the year so far: “I think we are starting to hit our stride now that we are healthy and have established more of a team identity. Every year the team is different, and it is exciting to have a uniquely deep roster as we head into UAA play.”

UChicago begins UAA play at the University of Rochester this Saturday, September 30, at 11 a.m.