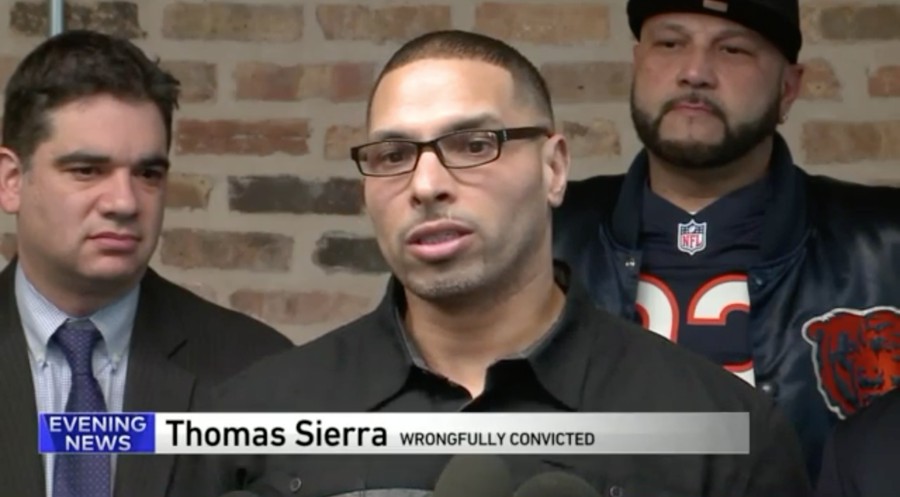 The Cook County State’s Attorney’s office dropped charges against Sierra on January 9 after determining that the evidence presented in his 1997 trail did not meet the burden of proof.

At the age of 19, Sierra was convicted for the gang-related murder of Noel Andujar, who died in the backseat of a car during a Logan Square shooting.

After eyewitnesses Alberto Rodriguez and Jose Melendez identified Sierra as the gunman, Sierra was sentenced to 45 years in prison. But both eyewitness say they were pressured by former Chicago Police Detective Reynaldo Guevara to identify Sierra.

Doubts about Guevara’s credibility heightened during a recent revisit of his testimony against abuse allegations from Gabriel Solache and Arturo Reyes, who both claimed Guevara coerced false confessions out of them in their 1998 double murder conviction. There, Cook County Judge James Obbish labeled Guevara a “bold-faced” liar, undeserving of credibility as a witness.

“Thomas had been contacting me and my colleagues [saying] that he had been another victim of this rogue and corrupt detective from the Chicago police department…[and] the witnesses who originally claimed that they identified Thomas made the identification only because Guevara told them to,” Tepfer said. “That was significant because that happened twenty years ago, before news about Guevara came to the forefront of the public.”

Worried that his case was slipping through the cracks, Sierra asked the Exoneration Project for representation. “My colleagues and I decided we would help him and quickly took action,” Tepfer said. “Eight months later he was exonerated.”

Tepfer recalls Obbish’s denouncement of Guevara as important to the progression of Sierra’s case.

“[W]e took that information in our case directly to the Cook County State Department to the decision makers and said: ‘Look, Reynaldo Guevara is instrumental in this investigation and solely responsible for Sierra’s conviction.... That a judge has called his credibility in question should cause you to reexamine whether you can keep this conviction intact.’”

According to Tepfer, the process of obtaining exoneration posed many administrative and preparatory challenges. Due to the case being decades old, they also had to ensure their information was accurate, which involved “reviewing enormous files.”

“Ultimately, the biggest challenge is convincing courts, judges, prosecutors, decision makers that they got it wrong,” he said. “Judges and prosecutors and juries and other parts of post conviction have already looked at it and determined nothing’s wrong…[causing] a big uphill battle.”

Following the court hearing, Sierra told reporters: “It’s still, you know, unreal right now. I did all the time for something I didn’t do, and now here it is, two months after being home.”

Tepfer recalled Sierra’s strong reactions during his exoneration. “He broke down. This meant so much to him, to be with his family and brother when it happened.”

“Thomas is a very intelligent, kind, thoughtful, and warm man. I just want to support him in whatever he chooses with his new start in life,” Tepfer added.

“We got lots of other clients who are fighting for the same results that we got for Thomas. We are just going to keep fighting for our clients, the ones we believe in, the ones that we believe we can prove that they are innocent.”