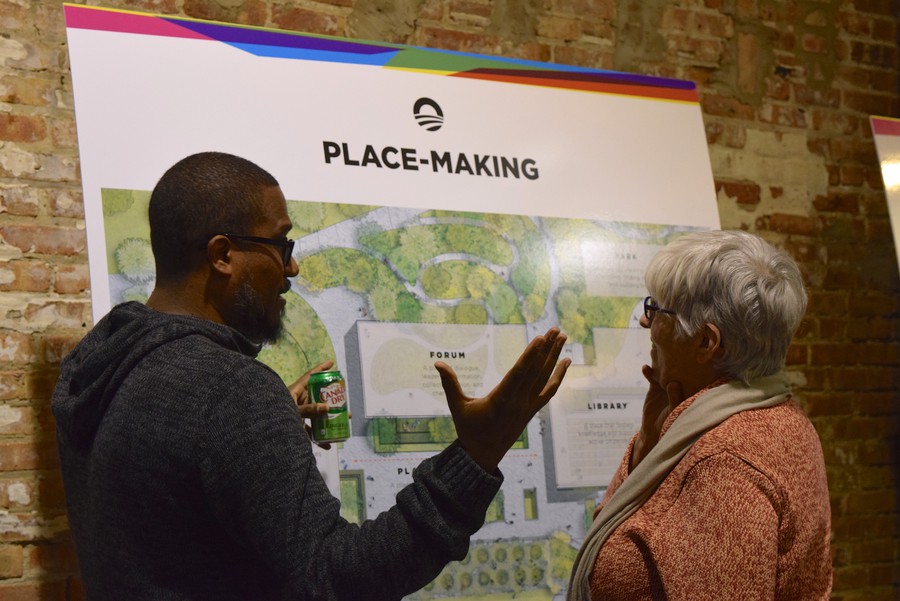 The exhibition team tasked with designing the Obama Presidential Center museum hosted a community forum Monday evening at the Experimental Station, inviting the public to learn more about the Center’s plans for the museum’s creative direction. The forum allowed community members to provide feedback on the Foundation’s current plans directly to the exhibition team.

Structured as an informal open house, people of all ages mingled over coffee and cookies before the first presentation, which overviewed the exhibition plans. Louise Bernard, director of the museum for the Obama Center and the creative design team Ralph Appelbaum Associates (RAA), presented the exhibition’s aims.

“We are really thinking about building a presidential museum for the future,” Bernard said to the crowded room. “What does it mean to create a space that will draw people in and to really help them think and understand what it means to be part of the United States?”

The entire back wall of the Experimental Station room consisted of a blackboard, where attendees were encouraged to write their thoughts on citizenship and suggestions for the exhibition team about the museum.

Poster displays with plans and maps lined the far wall, and the official three-dimensional, six-foot Obama Center design diorama was brought out for public viewing.

The exhibition team plans to digitize as many artifacts and documents from the museum in order to increase accessibility to the museum’s resources, Bernard said.

Creative technologist Hans Neubert, a member of the exhibition team, will be working as an intermediary of sorts, utilizing technology to actualize his team members’ desire to create an interactive visitor experience and a digital platform which will make museum resources more accessible to the public.

Neubert described the importance of sharing Barack Obama’s story throughout the exhibition while discussing the development of RAA’s initial proposal to the Obama Foundation. The museum maintains this focus on narrative from its material artifacts to the lower level architecture connecting the museum, forum, and library.

While the museum’s content will primarily focus on the stories of Barack and Michelle Obama, it will also include black history, the history of progressive movements, and the events leading to Barack’s election.

Along with the Obama administration’s victories, the museum also hopes to share counternarratives and challenges to Obama’s legacy, including racism, nativism, and populism.

According to Bernard, 700,000 visitors are expected to come to the Center annually, making it a forceful presence within the community. As part of the exhibition team, artists from Chicago have been hired to offer their knowledge of the area and help implement community-driven content into the exhibition plans.

One such artist is Norman Teague, a South Shore resident and art education professor at the School of the Art Institute of Chicago.

Even with the Obama Foundation’s purported desire to collaborate with the community during the exhibition’s development, the evening brought up logistical concerns surrounding features of the Center’s plans.

When asked about the closing of Cornell Drive, Teague described concerns regarding the traffic problems that would be created, and suggested it would be better to build Cornell as a tunnel under the park rather than remove it all together.

As a member of the exhibition team responsible for community relations, Teague made clear that he believes the Center’s success depends on the Foundation’s ability to listen to community concerns and suggestions.

Throughout the evening, the exhibition team stressed their desire for the Center to call visitors and the surrounding community to action. “At the core of the project is the idea of civic engagement and what it means to inspire and empower people,” Bernard said.