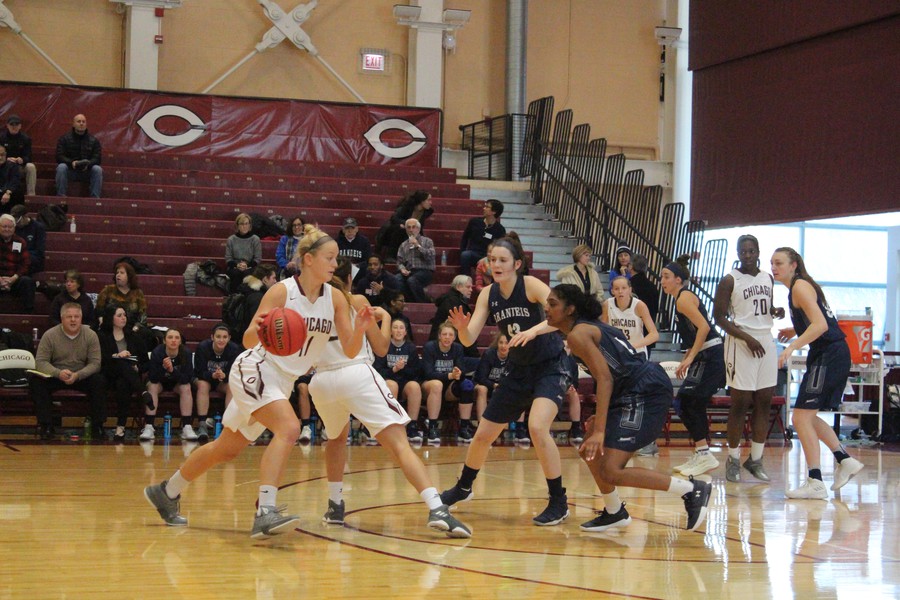 The Maroons continued to dominate conference play with two home victories against New York University and Brandeis University this past weekend, advancing to 3–0 in UAA play and 12–2 for the season, continuing their 10-match winning streak.

The NYU Violets posed a challenge for the Maroons, having gone on a 10–0 run in the beginning of the first quarter. The Maroons struggled to find their groove until third-year Olariche Obi took charge of rebounds and finally scored in the paint. This momentum proved lasting: The score was 24–21 at the end of the quarter.

As the second quarter started, second-year Miranda Burt was on fire from three, with each shot making it in. This helped the Maroons keep the lead, and two minutes into the quarter they were 27–26.

The second half was dominated by the Maroons. Defense was key, with several blocks made by second-year Taylor Lake. The Maroons were up by as many as 20 points and kept the Violets to scoring only nine points in the third quarter. The final score was 83–59.

In their game against Brandeis, the Maroons started at a fast pace, eventually going on a 14–2 run, with Obi on the scoreboard with two consecutive buckets.

The Maroons eventually began to struggle, with the Brandeis Judges lowering the deficit to one point, but as the first half came to a close, the Maroons led 33–30. The difficulty to shoot the rock was evident, with the Maroons going one-for-nine from three. They were outscored the second quarter 16–10. The Judges would also assert themselves in the paint by outrebounding the home team.

The third quarter saw continued pressure by the Judges, who eventually outscored the Maroons 21–16. The Judges saw the free-throw line more often, with the Maroons not getting any calls. The quarter ended with the Judges taking the lead at 51–49.

Lake took charge in the fourth quarter, relentlessly driving the ball and scoring. She scored 10 points in the fourth alone, totaling 16 points and three blocks. Obi and Burt combined for 28 points, with the bench totaling 12. Ultimately, the Judges trailed by four points in the final minutes and the Maroons extended their lead, making five out of six free throws. In the end, the Maroons came out victorious, 72–63.

When asked about adversity faced in these games, Burt said, “Our focus has been playing to win every possession, which we have been getting better at so far this season. We had a couple of stretches where the opposing team made a run. We still trusted our game plan, and made sure we were on the same page to stop their momentum. We have a very high level of trust in our coaches and teammates, so we were not panicking and went back to what we’re comfortable with. Offensively, whenever we struggle, we go back to our basic offense and do stuff that we have done well all year. We try to get the ball inside to score there, or open up the perimeter more. We have so many weapons on offense, we trust that we can quickly get out of a slump.”

The Maroons will next play Carnegie Mellon on January 19 at 5 p.m.