Swimming to Honor Their Seniors 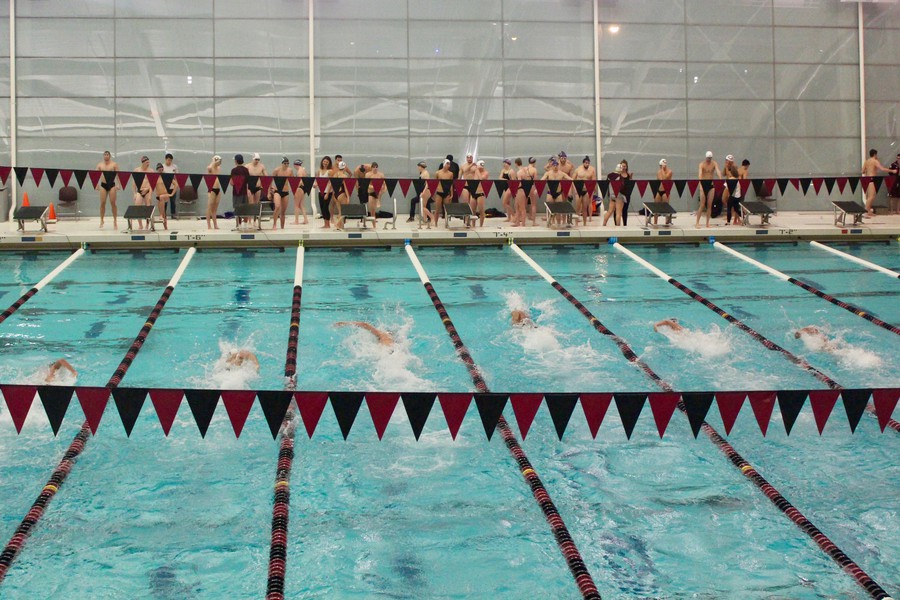 The swim team swims its way down the lanes on January 12.

After a strong start to the new year, the Maroons’ swimming and diving teams are ready to take on UW–Milwaukee this Saturday. With the Panthers being a NCAA Division I foe, the Maroons are going to be fired up for the battle. This occasion also has extra significance because it marks Senior Day, where the University of Chicago will commemorate and recognize the 10 fourth-years on the roster for their efforts and achievements.

The South Siders come to this dual meet following last weekend’s meet against Lewis University and Olivet Nazarene University. They were dominant, clinching 14 events with second-year Agnes Lo providing one of the multiple noteworthy performances. With wins in the one-meter and three-meter diving events, by 33 and 37 points, respectively, Lo was named the UAA Women’s Diver of the Week, which was her third UAA award of this season. To make things even better, her results in these events were good enough to be classified as NCAA provisional qualifying scores. Additionally, first-year Elizabeth Shen won the women’s 100- and 200-yard freestyle events while second-year Taye Baldinazzo won the 100-yard freestyle event for the men’s section in addition to being runner-up in the 200-yard individual medley and 200-yard freestyle events. In the end, UChicago’s women’s team beat Lewis by a score of 222–65 and ONU 154–144. The men’s team also beat Lewis by a hefty margin, winning 177–99, but they narrowly lost out to ONU 146–133.

With such a good showing last weekend, morale in the Maroon camp is high. Second-year Tina Rodriguez concurs, saying, “The team is excited for the next meet. It is our last home meet for the season where we celebrate the graduating seniors.” This sense of excitement and unity in the team camp is likely to drive them forward in their future endeavors. This sense of teamwork was highlighted by the South Siders’ success in the 400-meter medley events in both the men’s and women’s section. In addition to this feeling of eagerness, the team is also working hard in order to achieve their goals. According to Rodriguez, “The team is still training hard to prepare for our end of season meets, and we’re confident that the long hours we put in, in and out of the pool, will pay off.” This shows that the Maroons are not resting on their laurels but making sure that they put in maximum effort till the very end. With this attitude, there is no doubt that they have a high chance of success.

The fourth-years will be commemorated at the Myers-McLoraine Pool at Ratner Athletics Center on Saturday at 1 p.m.