Who Run the World? Girls! 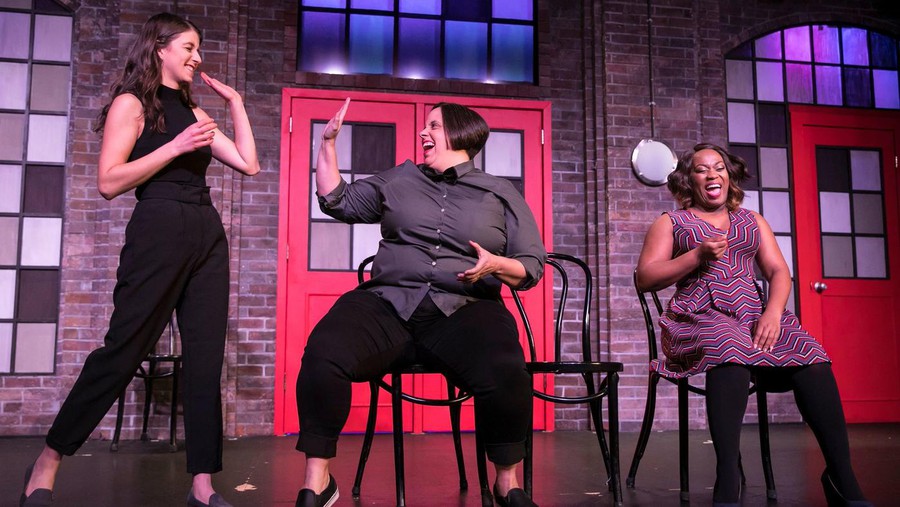 Cast of "She the People" from left to right: Maria Randazzo, Alex Bellisle, and Alexis J. Roston.

It’s 2018, and there still hasn’t been a female president, and women are still being mansplained to on the daily. The Second City brought She the People: Girlfriends’ Guide to Sisters Doing It for Themselves at just the right time. A sketch comedy show created, designed, and performed by the women of Second City, it roasts the patriarchy and tries to make sense of the world we live in through the female lens.

Directed by Carly Heffernan, the show covers a spectrum of topics from clothing and turning into your mom to weightier subjects like abortion. It starts with a scene depicting the messy break-up of female friendships, followed by a satirical remake of razor and shampoo commercials depicting unrealistic feminine ideals. The first half of the show continues with sketches on issues like the pain of dieting, mimosas at brunch, catcalling, privilege, women in the workplace, and the pressures of pregnancy and motherhood. The second half of the show includes sketches about the first woman president, taking pride in being smart, the toxic idea of wanting to be “like other girls,” being a grandmother with a daughter-in-law, and debunking the idea that girls are princesses who need princes to be happy.

Audience members were also able to participate in some of the sketches. The most interactive sketch is a game show called “You Oughta Know” (a reference to the iconic song by Alanis Morissette). Company member Maria Randazzo plays game show host, asking questions whose answers the participants (one of whom is an audience member) ought to know. The point is to highlight that people pay attention to meaningless celebrity culture and gossip like the Kardashians but ignore other more important things like current events. The show also has some musical sketches; ensemble member Carisa Barreca, in the style of a Disney musical number, sings about how girls often risk their safety when trying to look for their “princes.”

The sketch comedy show does not rely on one-liners: It builds upon its jokes and seems relevant to a wide group of people. The show will run until April 1 of this year so don’t miss out on this hilarious show created entirely by the fearless women of The Second City.