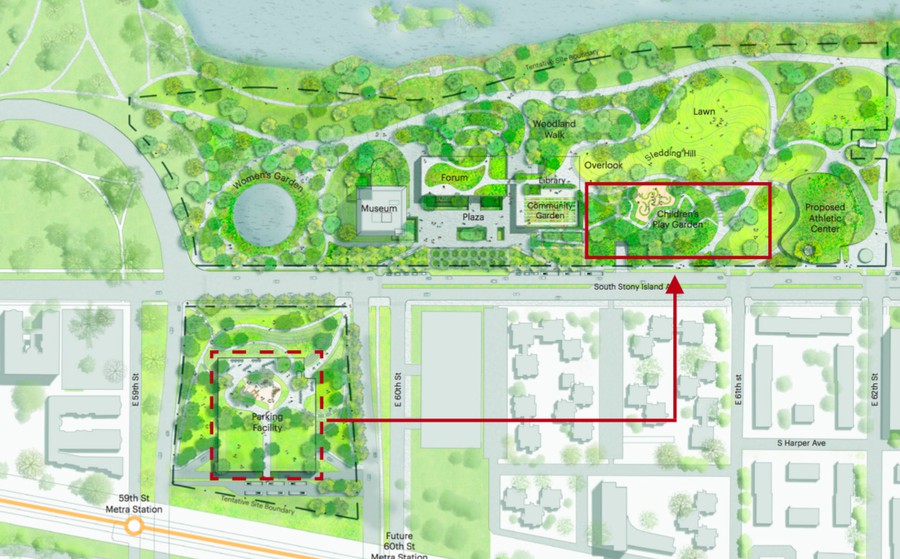 The Obama Foundation announced that the parking garage serving the Obama Presidential Center will be located under-ground in Jackson Park, not on the eastern end of the Midway, as had previously been announced.

The Obama Foundation announced today that the Obama Presidential Center’s garage will be under the Center, not aboveground on the Midway.

The Center’s design originally included a two-story, 450-car parking garage on a patch of land at the east end of the Midway, across Stony Island Avenue from the main site. The lost park space was meant to be compensated for by a landscaped roof atop the garage. The garage will now be constructed under the Center, with the entrance on Stony Island Avenue across from its intersection with 61st Street.

At least one of the groups that had opposed the garage’s original location, Save the Midway, was invited to a December 20th meeting at the Obama Foundation’s headquarters where potential changes to the garage were discussed, according to a story by the Chicago Sun-Times. A statement on the group’s website cites various reasons for opposing the garage’s original location, such as the location’s encroachment on public green space and interference with Frederick Law Olmstead’s imagined natural conduit between Washington and Jackson Parks.

“Save the Midway is extremely pleased to learn that the historic, open, public parkland of the Midway Plaisance has been withdrawn from consideration as a possible site for a parking garage for the Obama Presidential Center—nor will it it will be transferred by the City to the private Obama Foundation,” the organization’s co-chair, Michael McNamee, said in an e-mail to The Maroon.

“We appreciate the community interest in the site at the east end of the Midway and look forward to continuing to work with local community groups and residents on ways to improve it and make more it accessible,” the Obama Foundation said in its press release. McNamee wrote in his e-mail that a foundation representative has told him the organization does not plan to request any part of the Midway from the city.

Obama Foundation officials have said that they hope to begin construction on the Center late this year and are aiming to open it in 2021.