The Demise of a Hyde Park Treasure

A grocery store, a meeting ground, and a neighborhood institution all in one, Treasure Island was rightfully beloved. It will be missed. 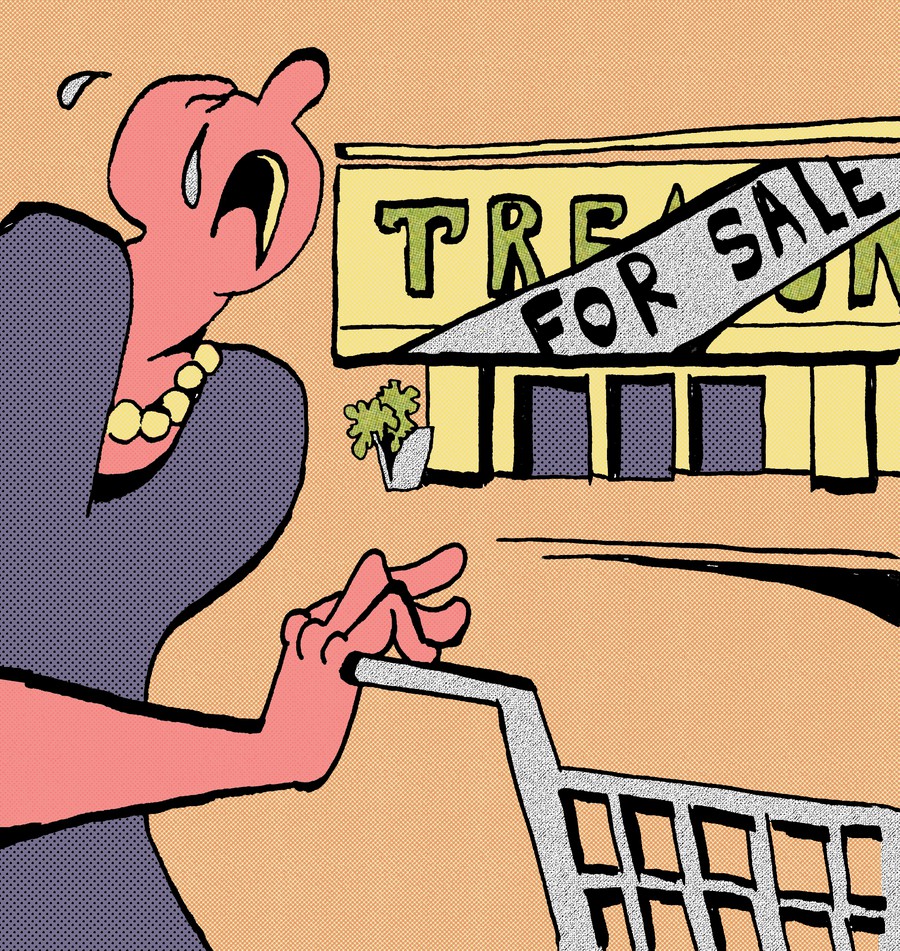 The Maroon’s O-Issue this year called Treasure Island “the place to go” for groceries in Hyde Park. One week later, the go-to was gone: on September 29, the Chicago-based chain announced that it planned to shutter all its stores.

While it might have been pricier than the average supermarket, there is plenty of reason to mourn Treasure Island’s closure. “America’s Most European Supermarket” played a key role in the Hyde Park grocery scene as the place to go for things you couldn’t find anywhere else. Hyde Park Produce, Open Produce, and Valley of Jordan serve their own roles, but none of them boast anywhere near the variety that Treasure Island did.

As a Floridian, I’ve always turned to key lime pie to stave off the gloom of Chicago winters. Whole Foods sells lime juice, and Hyde Park Produce occasionally offers key limes, but I could only count on Treasure Island to stock bottles of key lime juice: Nellie & Joe’s, pink letters boasting “Famous Key West Lime Juice” over the pastel cottages featured on every label. After hearing the store was closing, I carried home five bottles of the stuff. In another Florida parallel, the checkout line that day stretched almost the length of the store—an atmosphere I’d only previously experienced in the frenzied preparations two days out from a major hurricane. TI’s closure might not be quite that catastrophic, but the urgency of the community was understandable.

That’s because TI was always more than just a grocery store—it was a neighborhood institution. Books from the Hyde Park Used Book Sale were always displayed in boxes outside the store to then be carted home in Treasure Island’s iconic paper bags. The store also generously provided meeting space to community groups, with everyone from the Hyde Park Historical Society to the Lakeside Quilting Guild gathering in the basement.

Sure, TI was a little more expensive than Aldi or Jewel, but its commitment to the community made it beloved all the same. In her Chicago Tribune column, Marilyn Katz highlighted some of the benefits of locally owned businesses like Treasure Island: They hire locally, build community wealth, and can be held accountable by locals.

For much of the store’s lifespan, Katz’s praise seems well-founded. Treasure Island’s CEO Maria Kamberos was rightfully commended for quickly opening a new store following the closure of the Hyde Park Co-Op in 2008. Not only did the company ensure that Hyde Park residents did not have to wait long for a new full-service grocer, TI also took the step of hiring many former Co-Op employees, saving jobs at the height of the recession.

For many, TI’s closure seems to fit a familiar mold, with yet another local, family-owned store caving beneath the pressure of the big bad big-boxes. The most obvious culprit in this narrative is a familiar one: Amazon, specifically the new Whole Foods on Lake Park Avenue. While Jeff Bezos deserves no praise for his record on labor rights, the information that has trickled out from Treasure Island has made Kamberos seem a little like a small-scale Bezos herself. Somewhere along the way, it seems that TI’s famed community consciousness was lost.

While federal law requires a 60-day advance notice of mass layoffs, Treasure Island employees were only notified in late September that the chain would close October 12 and have so far received no severance pay. A letter in the Hyde Park Herald revealed that the company informed employees that it would not be providing their health insurance in October. The letter also claimed that management was refusing to respond to calls from rightfully disgruntled employees. With effectively zero warning from the chain, TI’s workers were left stranded.

For many employees, the potential alternatives are bleak. Lorenzo Escamilla, a produce clerk at the Hyde Park location, said at a recent rally that other chains like Mariano’s and Pete’s only hire part-time. Escamilla had been working full-time and receiving benefits at Treasure Island, but now faces an uncertain future. Treasure Island’s top brass has not only left Hyde Park residents and community groups without an essential community institution—it has thrown the lives of hundreds of people into chaos.

Fortunately, UChicago has the power to right this situation, at least for employees at the Hyde Park location. The University owns the plaza at 55th and Lake Park and is currently seeking a new grocery store to fill the space. In its role as landlord, it would be fairly simple for the University to require that any new store reinstate the former Treasure Island employees, with the same pay and benefits, the same way TI hired former employees of the Hyde Park Co-Op. In its search for a new tenant, the University must not only consider the needs of local shoppers, but the future of Treasure Island’s workers. Perhaps most importantly, whichever grocery store fills that space ought to serve not just as a place to buy lime juice, but as an anchor of the Hyde Park community, just as TI did for the last decade.