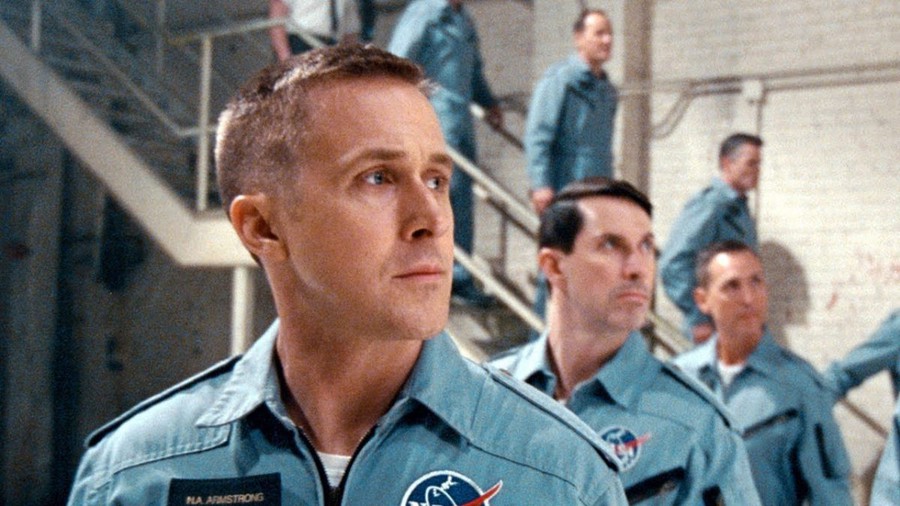 Who would have guessed that after making both his harrowing parable Whiplash and momentary Best Picture winner La La Land, we would find Damien Chazelle here, staring into the empty vastness of space unaccompanied by even a lick of jazz? His upcoming project, First Man, based on the biography by James R. Hansen, traces Neil Armstrong’s elliptical path onto the lunar surface and into the annals of history. Since his last feature reanimated a genre that died with Busby Berkeley, I had hope that Chazelle would be able to break the listless gravity of that other Hollywood staple, the biopic. Unfortunately, First Man can be neatly shelved among those other recent pictures in that genre (Darkest Hour, The Imitation Game, etc.) that lack not competence, but sophistication.

While ostensibly biographical, First Man begins with Armstrong (played by Ryan Gosling) as a NASA test pilot and swiftly transitions to the Apollo missions, paring down the story such as to remove anything that would place this arc within the wider context of his life. After his young daughter’s death from cancer at the onset of the film, Armstrong is quickly marshalled into NASA’s fledgling astronaut program and conscripted into their mad plan to beat the Soviets to the moon. His ever-supportive, yet justifiably concerned wife (played by Claire Foy) is always at his side even through the mounting funerals for his peers that never made it off the ground.

Ryan Gosling’s Neil Armstrong is a laconic archetype of masculinity, his psyche as impenetrable as the Earth’s upper atmosphere. From the beginning, it is clear that he has the right stuff—he responds to every voiced doubt with a quick rejoinder and throws himself at every task with suicidal daring and self-confidence. He knows he is preparing for a mission from which he may never return but never hints at why. Is it for his deceased daughter? His living wife and children? Because it’s there? Armstrong comes across as less human than the android Gosling played in Blade Runner 2049 last year.

True to its genre, First Man is a film obsessed with the importance of the story it is telling. Even considering its flight sequences, most of the feature’s 138-minute runtime is dialogue: the weighty, supposedly powerful dialogue in which these historical dramas specialize. NASA bureaucrats heatedly discuss the fate of their mission. Armstrong’s wife mourns his recklessness. The camera hangs on each line, punctuating these moments with the actors’ determined silences and unnerving stares. Almost the entire film is told in close-up, composed with a shocking amount of camera shake which must be Chazelle’s intended stand-in for “style.” It is this claustrophobia, rather than any dramatic tension, that makes the scenes of spaceflight always vertiginous and sometimes thrilling.

Yet for all of First Man’s self-importance, it nearly misses its opportunity to dwell on the significance of its conclusion—the landing itself. Armstrong ambles out of the Eagle and onto the Sea of Tranquility, delivering those words that will be repeated for as long as there are men to speak them. He moves purposefully, at a loss for the first time in this film. Watching this climax, I saw the movie as it could have been: a meditation on the achievement itself rather than a dry profile of its most famous participant. As we have it, the film’s greatest moment may be just after this: an excerpt from President Kennedy’s speech in which he dared us, as a nation and as a species, to reach the Moon by that decade’s end. Here the film confronts the profoundly mythic quality of the Apollo 11 mission—its role as the telos of the age of reason in which we find ourselves living. The only thing that extraordinary about First Man is how it is able to strip such a feat of just that quality.