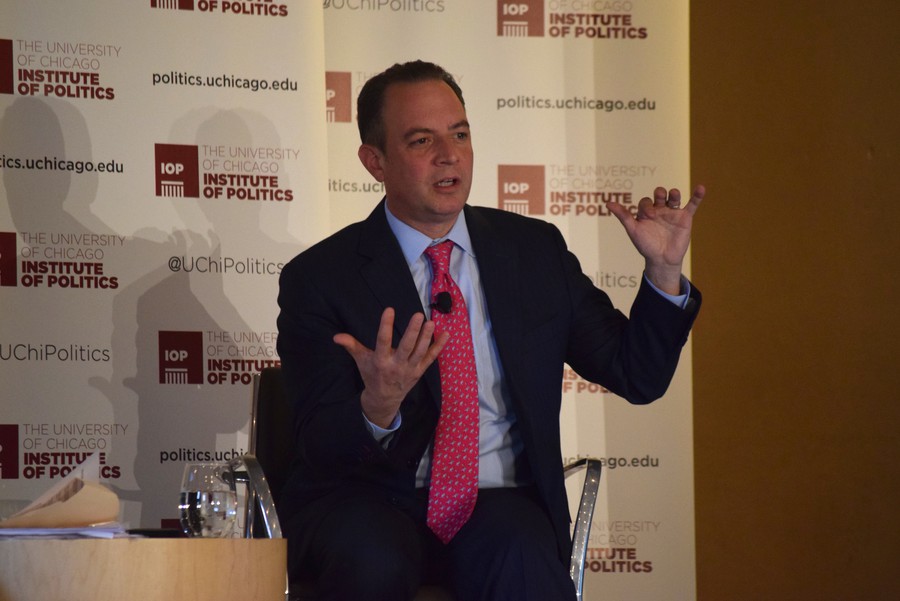 In addition to midterms and President Trump's rhetoric, Priebus speculated what Democrats might pose the biggest threats during the 2020 presidential election.

The talk was for students only, and Priebus spoke candidly about his six months working in the Trump White House and his thoughts on the November Senate and House races. Axelrod and Priebus both drew laughs discussing the President’s unpredictable behavior. “How many mornings did you wake up, look at your cell phone... and say ‘WTF?’” Axelrod asked.

“Certainly there were many days that I picked up the phone and the President said, ‘Hey, did you see my tweet?’ I thought ‘Augh, what tweet?’” Priebus said.

Priebus, who resigned from his chief of staff post in July 2017 after rumors that Trump planned to replace him, talked about significant differences between President Trump’s approach and his own and spoke of a White House where staff wielded little real power.

Priebus was careful to note, however, that Trump’s style was what the American people voted for and what made him uniquely equipped to beat Hillary Clinton among a crowded Republican field.

“The country isn’t looking to hire a pastor... The country’s not looking to hire a boy scout... When he came down the escalator in June of 2015, the entire country knew exactly who Donald Trump was,” Priebus said in a response to a student question about Trump’s style of rhetoric. He went on to cite Trump’s rapid-fire passage of executive orders, aggressive deregulation, and the NAFTA renegotiations as consequences of the President’s unique approach.

When Axelrod asked about the November midterm elections, Priebus was optimistic about Republican prospects in the Senate, noting that only one crucial race—Nevada—is in a state that was carried by Clinton in 2016. For other Senate races, Priebus suggested that messaging to the party base would work and asserted that the Kavanaugh hearings had indeed energized Republican voters.

The House, according to Priebus, is a different story. He predicted that energizing the base would not work in districts that voted Romney in 2012 and Clinton in 2016, and he added that the Republican party needed to reach out to more black and Hispanic voters. This echoes a common theme from the “Growth and Opportunity Project” report he oversaw after the 2012 elections, during his tenure as RNC chairman. Axelrod referred to that report as “the autopsy,” a name that pundits have jokingly used in the past to note the failures of Republicans in 2012 and the need for a “postmortem” evaluation.

When asked about the 2020 election and what Democratic candidate would pose the toughest challenge to Trump, Priebus named former Vice President Joe Biden and former New York Mayor Michael Bloomberg, while also suggesting the possibility of “somebody that nobody’s thinking about.”

Several students were given the opportunity to ask questions in the last 20 minutes of the event. Questions ranged from inquiries about White House leaks and how to overcome hyper-partisanship to personal queries about whether Priebus felt “complicit” in Trump’s rhetoric and what his biggest regret was in the White House. Priebus responded that he might have rolled out the Muslim travel ban differently but also claimed his own powerlessness in the Trump White House.

“Regretting something... presupposes that you could have changed something,” he said.