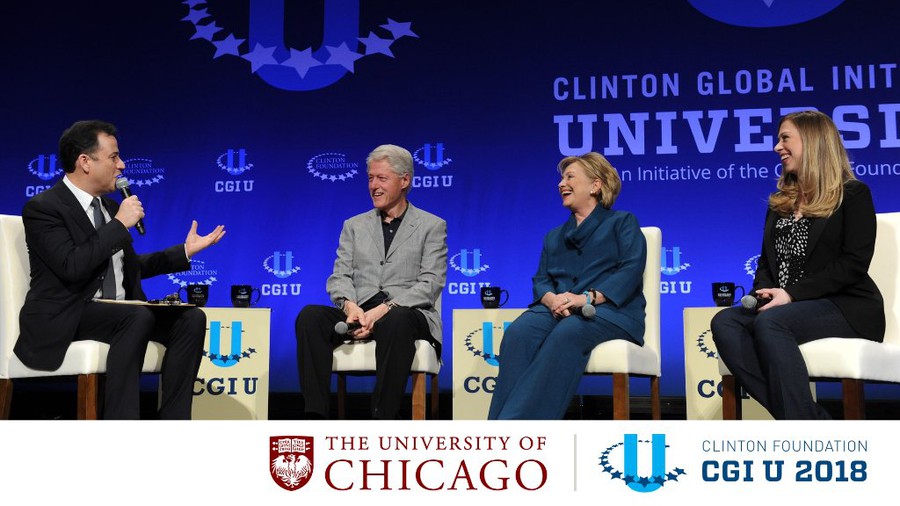 Hillary Clinton will be joining her husband and daughter at the 11th Annual Clinton Global Initiative University (CGI U) meeting hosted on campus this weekend.

The Clinton Foundation, a charity founded by the Clintons that focuses on health, public service, and economics, announced Hillary Clinton’s attendance late last week. Previously, the only Clintons confirmed to be coming were former president Bill Clinton and Chelsea Clinton.

The meeting agenda does not specify when and where Hillary Clinton will speak. Bill and Chelsea Clinton will speak at the closing plenary on Saturday afternoon. Attendance will be limited to participants of CGI U, but the plenary will be broadcast live.

Hillary Clinton, a former Secretary of State and former Democratic candidate for president, profiled several CGI U youth leaders on Twitter on the day of the announcement.

She did not comment directly on attending the CGI U meeting, and she did not respond to requests by The Maroon for comment.

The CGI U meeting, which was announced in February to be coming to UChicago, will host over 1000 students, over 150 of whom are affiliated with the University. This includes students from the University, UChicago Laboratory Schools, and UChicago Charter School. Previous CGI U meetings were held at Northeastern, Tulane, and other universities.

During the meeting, participants will attend plenary sessions, seminars, and networking sessions discussing political, social, and economic issues, including freedom of expression and gun violence. The third day of the event is a “Day of Action” where participants will partake in community service.

“The event…engages the next generation of leaders and social entrepreneurs to help them make a positive impact in communities worldwide,” the University said in a statement. “Students will gather to discuss and develop ideas and proposals to address some of the most pressing social, economic and environmental challenges.”

Despite the Clintons’ Democratic Party affiliation, the University billed the event as nonpartisan when it announced the meeting in February.

In an e-mail sent to members of the University community on the same day as the Hillary announcement, Vice President for Strategic Initiatives and Deputy Provost Darren Reisberg and Dean of Students in the University Michele Rasmussen wrote, “The 2018 CGI U student participants...have proposed commitments to action seeking to, among other things, reduce food waste through a pantry management system, give communities the power to pursue healthy eating, combat air pollution in India, and improve sustainable farming in Haiti.”